ODSONNE EDOUARD will agree a £15.5million switch to Crystal Palace today and finally put an end to a transfer saga that has engulfed Celtic for over a year.

Reports insist both clubs have settled on a fee and the French striker is happy with personal terms that are likely to be around £80,000-per-week mark spread over a five-year contract.

Twenty-three-year-old Edouard’s form has been erratic since last summer when intense speculation about his future appeared to hinder his performances in a crucial season at Parkhead.

The flamboyant frontman cost the Hoops a club record £9million when he joined from Paris Saint-Germain in June 2018 after an initial impressive year-long loan agreement. The French giants are due a percentage of the profits in a sell-on clause that will bring them in £2.6million. 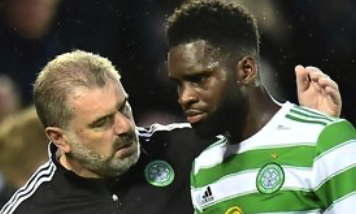 Palace boss Patrick Vieira has been searching for a new attack-leader and Edouard emerged as his preferred choice, according to Sky Sports News.

The player netted 86 goals for the Hoops with three coming this season, one from the penalty spot in the 6-0 Premiership win over Dundee.

He is likely to make his debut in the London derby against Spurs at 25,456-capacity Selhurst Park on September 11.

Edouard joins former Celtic team-mate Kristoffer Ajer in England’s capital city after the Norwegian international defender moved to Brentford in a £13.5million switch last month. The final fee could rise to as high as £17.5million, according to some estimations.

* DON’T miss the up-to-date moves on transfer deadline day – only in your champion CQN. Just watch this space!