The green jersey contains a pair of harps on the front, with a print of the Proclamation of the Irish Republic on the back. 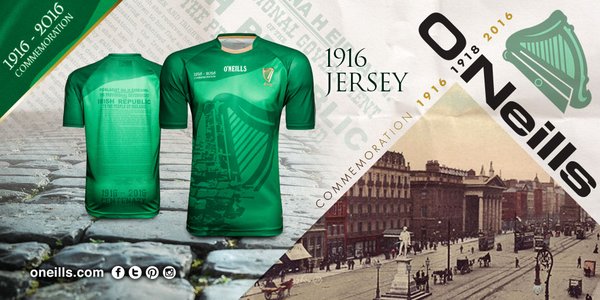 As O’Neills moves towards their own centenary celebrations, they state that they are “proud and grateful to be involved in commemorating the 100th Anniversary of this compelling event from which modern Ireland developed with this commemorative jersey”.

Retailing at £35/€55 for adults and £28/€43 for children the description of the jersey on the sports company’s website starts with a line from William Butler Yeats’s poem ‘Easter, 1916’ – ‘All changed, changed utterly: A terrible beauty is born.’

The website points out the establishment of the company in Capel Street in 1918 by Charles O’Neill and how the street “ had witnessed much of the fighting and devastation of the Rising”.  In the blog section of their website O’Neill’s say this:

“2016 is a momentous year. It marks the centenary of the 1916 Easter Rising; a significant event that can be attributed as a defining moment in the struggle for Irish Independence and the foundation of modern Ireland. The Rising, which began with the reading of the Proclamation ‘Poblacht na hÉireann’ by Pádraig Pearse, was amongst a number of events that occurred during the tumultuous period 1912 – 1923. In the words of poet William Butler Yeats, after the Rising “all changed, changed utterly.” In the coming year, across Ireland, an extensive commemorative programme has been organised to examine and reflect on the legacy of this seminal historical event.

“Indeed O’Neills was established in Capel Street, Dublin, in 1918 by Charles O’Neill. Capel Street had witnessed much of the fighting and devastation of the Rising.

“As O’Neills move towards our own centenary in 2018, we are proud and grateful to be involved in commemorating the 100th anniversary of this compelling event from which modern Ireland developed with this commemorative jersey.”

Today O’Neill’s  is one of the largest sportswear manufacturer in Ireland, employing over 560 people.

The company still dominates the GAA market and also have a number of agreements with sporting organisations, including providing player gear and equipment to all of Cricket Ireland’s international teams.

You can order the jersey at O’Neills website – https://www.oneills.com