CELTIC have been given the green light to sign £2.5million Argentinian left-back Alexandro Bernabei.

Ange Postecoglou has been tracking the 21-year-old Lanus defender in recent months as he looks to strengthen his No.3 position  and add competition for Greg Taylor.

The Hoops boss hinted that a move was imminent for Bernabei when he allowed young Irishman Liam Scales to join Aberdeen on a season-long loan yesterday.

That leaves the Greek-Australian short on cover on the left-hand side of his defensive back-line and will see him make the final push to get the highly-rated South American to Parkhead as swiftly as possible to join in with pre-season training which is due to start for most of the squad at Lennoxtown on Monday, according to a report in Sky Sports. 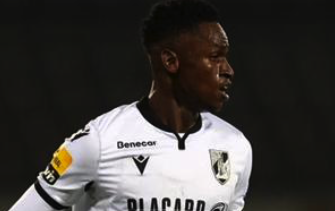 ENFORCER…Alfa Semedo could be poised to move from Portugal to Paradise.

Bernabei, who was red-carded for a headbutt flashpoint in his side’s 1-0 league win at the weekend, has reportedly said his farewells to his club team-mates and is ready to jet across the Atlantic to kick-start a five-year contract in Glasgow.

The Argentinian outfit originally wanted between £3.5million and £4million for their top talent, but it looks as though a compromise has been reached.

There is every chance the defender could be joined at the champions by Vitoria Guimaraes’ anchorman Alfa Semedo, a 24-year-old Guinea-Bissau international who could take the place of Nir Bitton in a defensive role in the middle of the park.

Claims in Portugal say the player is poised to agree a season-long temporary transfer with Postecoglou having the option to buy at around the £3.5million mark.

Semedo already has experience of playing in UK football after loan spells with Reading and Nottingham Forest in the Championship.