The first points of the new campaign had already been squandered in the second outing in a dismal stalemate at Kilmarnock in which Boli Bolingoli made a cameo appearance.

Unbeknownst to anyone at the club, the Belgian defender took an unauthorised break in high-risk Spain only a few days beforehand and broke the government’s quaratine rules upon his arrival. The Hoops were in direct line of a ferocious backlash from the Holyrood chiefs with two games against St Mirren and Aberdeen postponed at a crucial stage of the season with the players still working on their match fitness.

Today, in Part Four of CQN’s EXCLUSIVE series, we look back to a traumatic period at the start of the season that had disastrous and long-reaching ramifications for Celtic.

Before that, though, the team enjoyed an overwhelming success as the European assault got underway. 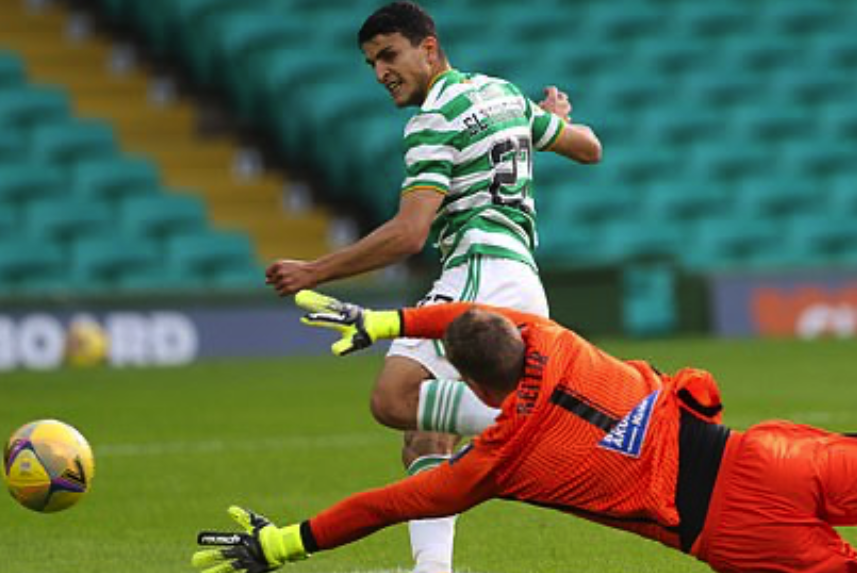 THE BREAKTHROUGH…Mohamed Elyounoussi gets Celtic off to the perfect start as he slots the opener past Reykjavik keeper Bettir Olafsson for the first of the Hoops’ six goals.

NEIL LENNON was able to sit back and enjoy the action as Celtic swept into the second round of the Champions League qualifiers at Parkhead this evening.

There was never the chance of a Lincoln Red Imps horror show that would have seen the Hoops topple into European oblivion as they took the game by the scruff of the neck right from the off and were in cruise control from the sixth minute when the hard-working Mohamed Elyounoussi scored the breakthrough goal.

By the half-hour mark, the team were coasting at 3-0 with an own goal from Adal Steinsson and an unstoppable header from Christopher jullien.

And a comprehensive performance was marked with three second-half goals from Greg Taylor, Odsonne Edouard and Elyounoussi in the dying moments.

None of the Icelandic opponents could have argued if the Hoops had gone in with double their their three-goal advantage at the interval. Bettir Olafsson’s goal led a charmed life at times and they even survived a penalty-kick call when an Edouard back-post effort looked to be scooped off the line by a desperate defender.

Referee Gishamer Sebastian wasn’t convinced and was satisfied to award a corner-kick. Where is VAR when you need it?

The Frenchman had already gone close with a header from a Taylor left-wing cross that was too close to the keeper to worry Olafsson before Elyounoussi, who looked lively and alert right from the start, claimed the opener. 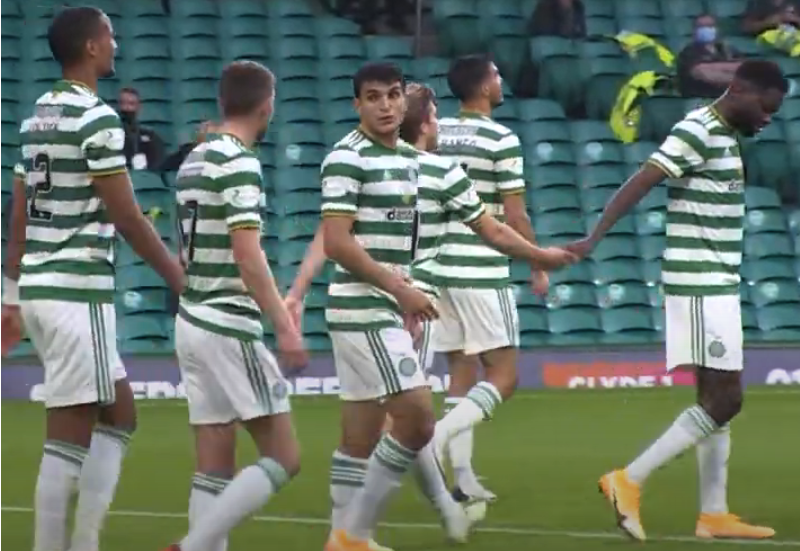 Jullien slung in a dangerous diagonal ball from inside his own half and the Norwegian international timed his run to perfection to knock the ball wide of the advancing netminder and race round the floundering Olafsson before rolling the ball into the gaping net.

The second strike arrived in the 17th minute when Ryan Christie released Hatem Abd Elhamed and his low ball from the right was arrowing towards the lurking Edouard before Steinsson got in front of the striker to knock the ball into his own net.

And it was Jullien who produced a killer header from a superb left-wing corner-kick from Ryan Christie to make absolutely sure there was no way the Icelanders thought they might be able to mount a fightback.

The towering French defender met the ball square on his forehead at the near post eight yards out and the keeper didn’t move as the effort zipped high into the net.

RISE AND SHINE…Christopher Jullien bullets in a header for No.3.

The game continued in much the same fashion with Celtic dominating possession and probing from all angles.

However, new Bhoy Vaslis Barkas was brought into action in the fading moments of first-half stoppage time when Christian Finnbogasson raced between Nir Bitton and Jullien to thrash a drive at goal from the edge of the box.

The Greek international keeper, who had been a mere spectator up until that point, showed superb concentration as he threw himself to his right to parry the ball and pounce on the rebound.

A minute into the second-half, Taylor, one of the smallest players on the pitch, scored the fourth with a HEADER from practically under the crossbar.

Lennon’s men put together a multi-passing movement as they shuttled the ball all over the pitch and it came to a rewarding conclusion when Elhamed delivered an inch-perfect cross from the right and Taylor materialised at the far post for a free header.

He couldn’t miss as he nodded home his first goal for the champions – and only his second in his career.

Just after the hour mark, Lennon made his first change of the evening when he put on Olivier Ntcham for Brown who promptly handed the captain’s armband to Callum McGregor.

NICE’N’EASY…Odsonne Edouard strolls away after slotting in the fifth goal. 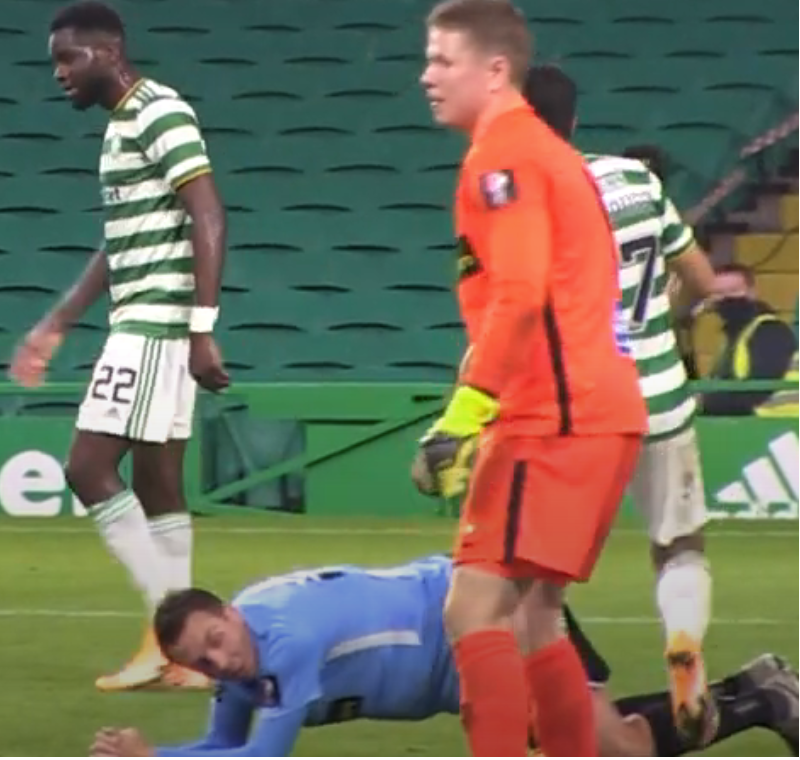 BEATEN AND BEWILDERED…keeper Bettir Olafsson and a defender are down and out.

In the 71st minute, Edouard scored the goal he had been threatening to hit all night as he waltzed his way through beyond four bamboozled defenders before sliding the ball beyond the stranded Olafsson.

It was a little piece of wizardry from the club’s talisman and it was his last action of the confrontation as he was withdrawn by Lennon with £5million Swiss hit man Albian Ajeti making his debut in his place.

At the same time, Patryk Klimala replaced the enterprising Christie as the Hoops gaffer looked to the weekend match against Dundee United at Tannadice.

Elyounoussi brought down the curtain on a fine individual display and fine team performance with a sixth in the fading moments when he stabbed in an accurate through pass from Ntcham.

All in all, it was a good night’s work for the champions as they continued to get rid of the rust.

Now for the next European test! 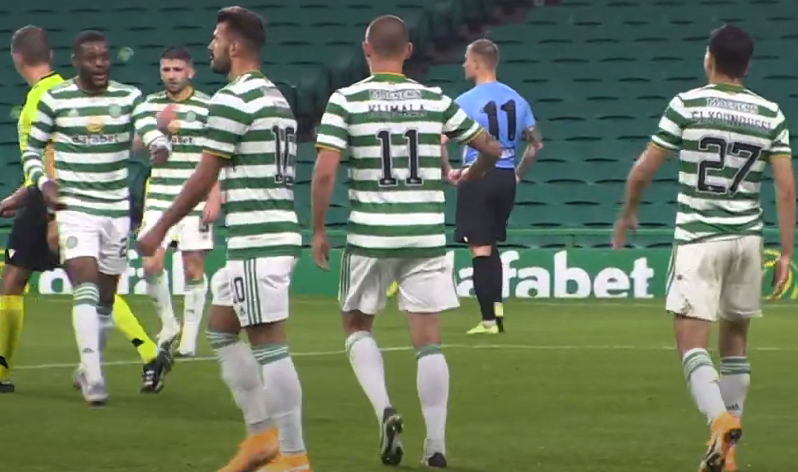 THE JOY OF SIX…Mohamed Elyounoussi (extreme right) is about to be congratulated after rounding off the scoring.

Neil Lennon will discover next week’s opponents when Hungary’s Ferencvaros and Sweden’s Djurgardens meet this evening.

Hopefully, they will win their way through to the third round and then take care of the two-legged play-off to reach the cash-rich Champions League group stages after failing in the past two years.

Lennon praised his players as they overwhelmed the Icelandic title-winners with three goals in each half after getting off to the perfect start with a neat strike from Man-of-the-Match Elyounoussi.

Witnessing their first action in nine days after league games against St Mirren and Aberdeen had been postponed on Scottish Government orders following the Boli Bolingoli incident, the Hoops boss was satisfied with a professional performance. 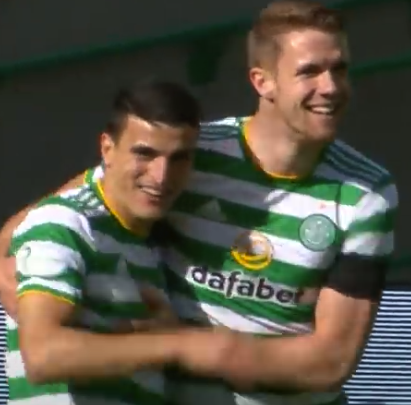 Looking ahead to the outcome of tonight’s encounter, Lennon said: “They are two well-organised teams. I’ve been impressed with Ferencvaros from what I’ve seen from them so far. It will be interesting to watch the game. I think it will be tight.

“It was a good night’s work for us. It was really important to get 90 minutes work into the legs and obviously to negotiate the tie, as well.

“To score six goals and keep a clean sheet is very good. I’m pleased with a lot of what I saw. Any lethargy or lack of match practice, they need to get through it. I’ve been there myself.

“So, it’s important to try and increase the intensity and get the games into their legs. We’ll see how they are on Thursday, but they should get a benefit from that.

“We’ve got a big couple of weeks coming up now, so it’s important we keep our focus.” 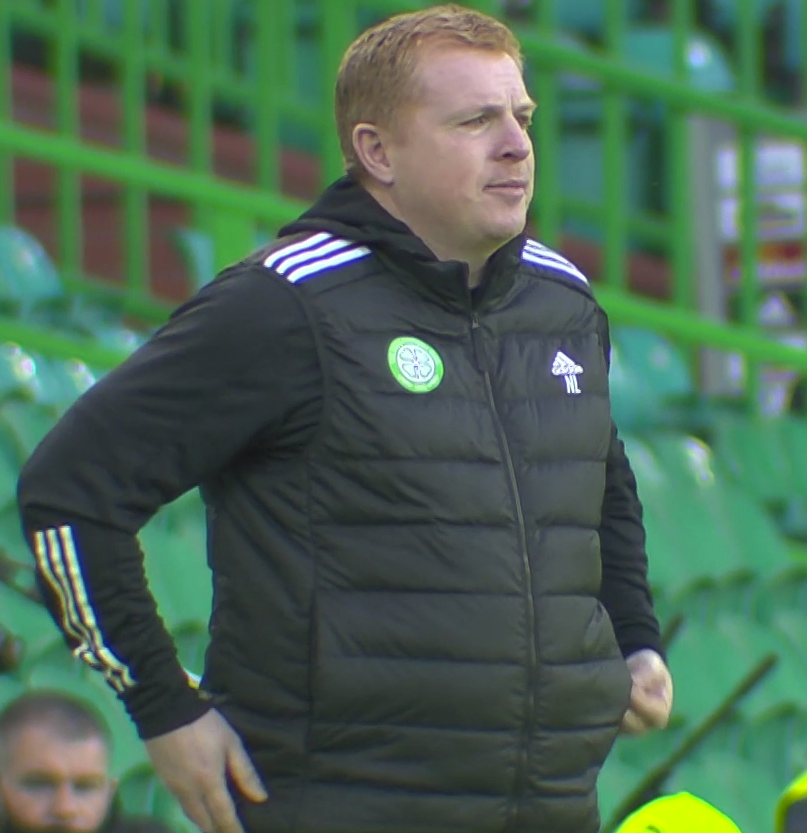 WAIT FOR IT…Neil Lennon gets ready to take on Ferencvaros.

CELTIC will face Ferencvaros in the Champions League second round qualifying knock-out tie at Parkhead a week tonight.

The Hungarians made no mistake as they made their home advantage in Budapest tell with a 2-0 win over Sweden’s Djurgarden with a double strike from South Sudan winger Tokmac Nguen.

The Hoops have never met Ferencvaros in European competition before, but have won seven of their 12 matches against opposition from Hungary.

The most recent of those ties came in the third round of qualifying for the 2003/04 Champions League with Martin O’Neill’s side coasting to a 5-0 aggregate victory over MTK Hungaria to seal a place in the group stage.

The champions will prepare for the match with a trip to Tannadice on Saturday evening for their Premiership tussle with newly-promoted Dundee United.

Then they can turn their sights on Ferencvaros.

The first three rounds of qualifying are all one-off games, with the final play-off stage settled over two legs.

* CQN wishes all our readers a Happy New Year and we hope 2022 is a memorable and enjoyable one for you and yours – and Celtic, too, of course!