TWENTY fateful days in August 2020 set the tone for one of the most dismal and wretched campaigns in Celtic’s recent history.

The situation that had looked so promising in the summer was turned on its head as the team showed worrying cracks on the field and obvious fractures in the dressing room.

The first points of the new campaign had already been squandered in the second outing in a frustrating stalemate at Kilmarnock in which Boli Bolingoli made a cameo appearance. A couple of days later it was discovered the bungling Belgian had made a hush-hush trip to high-risk Spain and ignored government quarantine guidelines upon his return. The fall-out saw the champions deprived of much-needed early-season action in postponed league games against St Mirren and Aberdeen.

It took a late goal from £5million new Bhoy Albian Ajeti to secure a win at newly-promoted Dundee United in another shaky performance.

Worse was to follow. Today, in Part Six of CQN’s EXCLUSIVE series, we look back to another traumatic European evening in the east end of Glasgow – and the extraordinary backlash from a furious Neil Lennon. 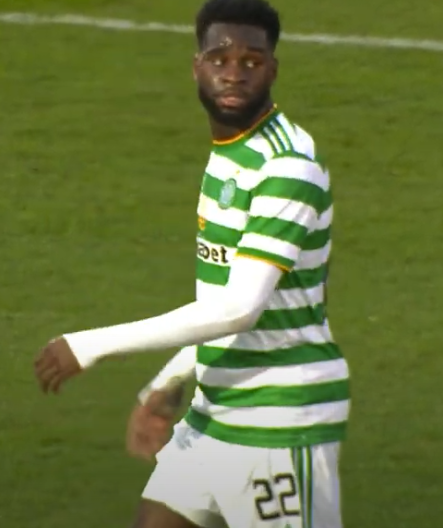 EURO BLOW…Odsonne Edouard was ruled out of the Ferencvaros tie.

ODSONNE EDOUARD is OUT of Celtic’s Champions League second round qualifying encounter against Ferencvaros at Parkhead tonight.

The French strike ace has been struggling with a thigh problem and has no role to play against the Hungarians.

Neil Lennon’s line-up doesn’t have a recognised attack-leader, but there is the chance James Forrest or Ryan Christie could be tasked with the main striking role.

New £5million frontman Albian Ajeti, the matchwinner against Dundee United at the weekend, will be on the substitutes’ bench alongside Patryk Klilmala.

Olivier Ntcham will keep his place in the team, while Kristoffer Ajer and Hatem Abd Elhamed will come in.

BLUNDER Bhoys Celtic flopped out of the Champions League this evening in an error-strewn x-certificate performance against a Hungarian side who have not reached the elite stages for 25 years.

It was a third successive European exit at Parkhead in just over a year for Neil Lennon’s side and questions will be asked following a dreadful display that lacked ingenuity, thrust and finishing power.

Ferencvaros followed the Romanians of Cluj and the Danes of FC Copenhagen in managing to overcome the Hoops in the east end of Glasgow and there can be no excuses for an appalling showing. 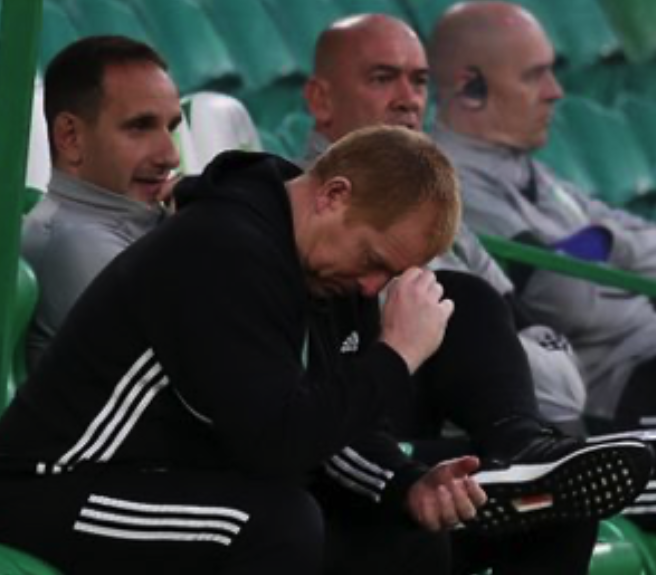 THE PAIN GAME…Neil Lennon feels the pressure in the dug-out as Celtic slip out of the Champions League.

Celtic missed the attacking leadership skills of the injured Odsonne Edouard, but that cannot be given as a reason for this dismal defeat.

Hatem Abd Elhamed, brought in for Jeremie Frimpong to add experience to the side, was the man who gifted the visitors their passage to the next stage.

The Israeli defender made a complete mess of a clearance out of the Ferencvaros defence in the 75th minute with the Hoops in the ascendency.

He could have attacked the ball, but, bewilderingly, allowed it to kick up in front of him and that was all dangerman Nguen Tokmac required to seize onto the ball.

He raced towards the goal with Elhamed chasing after him to force him into a corner. Keeper Vasilis Barkas raced out and didn’t look too clever when the forward squeezed the ball under him and into the net for the winning goal.

It was mistake following mistake and Celtic can now count the cost of £30million-plus being removed from the coffers.

Celtic’s lack of guile and penetration in the first-half was obvious as they struggled to break down the Hungarian defence. Lennon’s men bossed possession, but rarely threatened to claim a breakthrough strike in the opening 45 minutes.

They had been stunned in the seventh minute when the visitors scored a goal from outside the box by David Siger that raged low past Barkas.

Ferencvaros snapped on to a loose pass from Callum McGregor just outside their penalty box to speed into attack where Scott Brown was forced to concede a corner-kick on the left-wing. The deadball effort wasn’t cleared and eventually fell to the feet of Siger who teed up a shot from 25 yards and sizzled a low drive into the net.

It was the worst possible start for the Scots against a team who were content to leave three up front and were happy to hit on the break. A goal to the good, their game plan was perfectly set up and executed.

The Hoops huffed and puffed, but there was a worrying lack of cutting edge when the ball was worked into danger areas and keeper Denes Dibusz was rarely asked to make a save.

After the setback of the Ferencvaros goal, Celtic tried to respond swiftly and Ryan Christie had a shot from a Greg Taylor left-wing cross deflected wide of the keeper’s right-hand post.

Five minutes later, Olivier Ntcham also missed the target with a low drive from the edge of the box as the Hoops desperately tried to claw their way into the game. 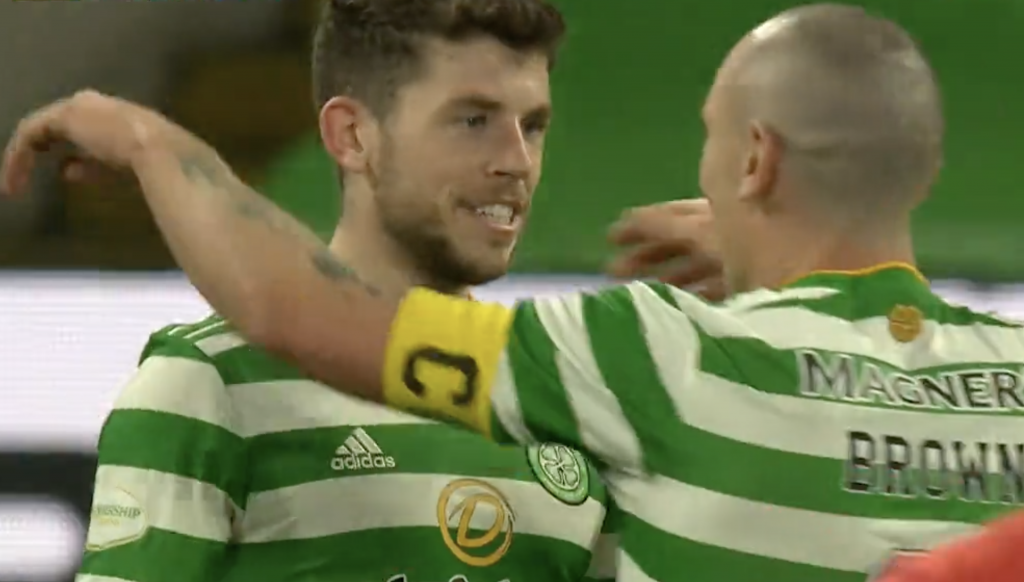 A FLEETING MOMENT OF JOY…marksman Ryan Christie is congratulated by skipper Scott Brown.

Christie did hit the leveller in the 53rd minute after some superb lead-up play, with Mohamed Elyounoussi figuring largely, and his drive took a slight deflection on its way into the net.

Three minutes later, the Hoops hit the bar when Ntcham got on the end of an Elhamed cross and the Norwegian international had the ball in the net shortly afterwards, but the Dutch referee rued offside in an extremely close call.

That was the story of Celtic’s night. Little went right and it was a difficult result to accept.

FURIOUS Neil Lennon threatened a clear-out of under-performing flops after Celtic’s miserable showing in the 2-1 loss to Ferencavros as they exited the Champions League for the third consecutive year.

The stunned manager accepted full responsibility for a dreadful display against the Hungarians that saw the Hoops collapse out of a European tournament for the third time in just over a year following last season’s home defeat from the Romanians of Cluj and the Danes of FC Copenhagen.

At a stroke, the loss wiped over £30million of European prize money from the club’s budget in a crucial campaign where they are aiming to make history by winning 10 titles in succession.

However, any thoughts of glory were well and truly put on the back-burner following a feeble showing against Ferencvaros. 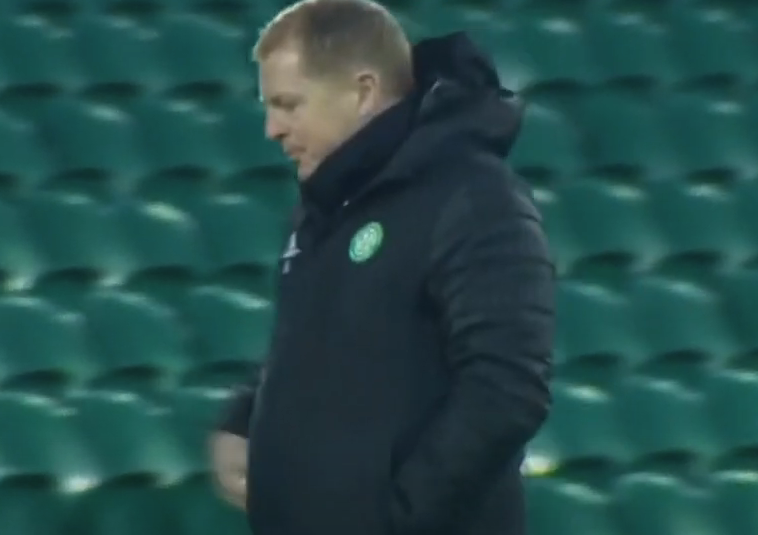 A MAN ALONE…Neil Lennon at an empty Celtic Park.

Lennon, speaking to the media, said: “There are some players who may want to leave and have made inroads into that in the last six months or so.

The Scotland international netted a second-half equaliser, but a blunder by Hatem Abd Elhamed and some weak goalkeeping by Vasilis Barkas allowed the visitors to score the winning goal with 15 minutes to go.

Lennon commented: “They (Ajeti and Klimala) are not match fit yet. It’s quite obvious, otherwise at least one of them would be playing. I want to play strikers, we were missing the big one (Edouard). I don’t know how much effect that had. We still had enough chances to win. 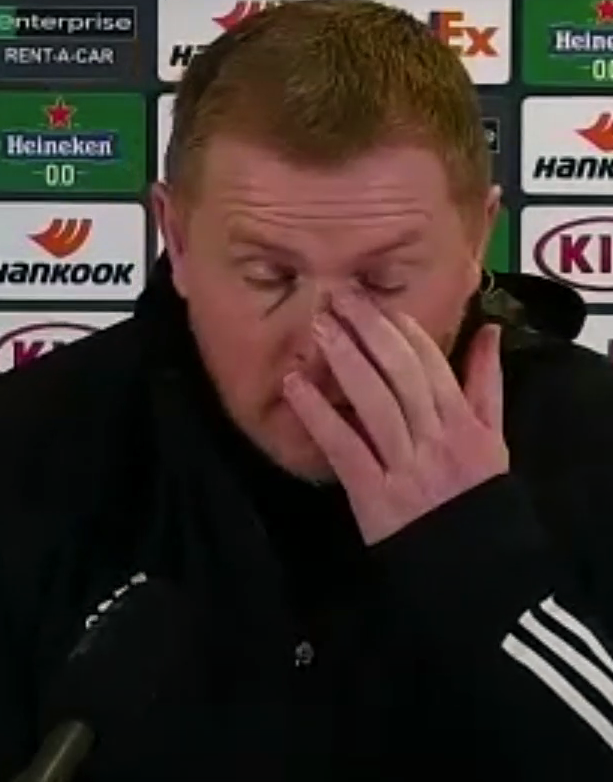 ONE IN THE EYE…a disappointed Neil Lennon speaks to the media.

“We lacked a killer instinct on Saturday and he was playing. We will all regret it and we will have to suck it up for a few days. The best thing we can do is get back out and play. There are no excuses from me for the players. We have to apologise to the supporters

“The first goal we can maybe legislate a little bit, the second goal is really poor decision-making. It’s individual mistakes. It’s cost us against Copenhagen (in the last 32 of the Europa League last season) and it’s cost us again.

“If you keep giving the opposition oxygen they hang in there. They score early. We don’t get out quick enough to stop the shot which was poor for us. But in the second-half we dominated. We should have won the game.

“I don’t know if we budget for it, but for everyone associated with the club it’s massively disappointing. I thought we were by far the better team.”