Celtic Quick News on News Now
You are at:Home»Latest News»20 YEARS AGO TODAY: HOORAY HENRIK FIRES CELTIC TO A TREBLE
By CQN Magazine on 26th May 2021 Latest News

MARTIN O’NEILL promised the Celtic fans he “would do everything possible” to put the team back on track when he took over the hot-seat for season 2000/01.

The Irishman had been lured to Parkhead after making his name at Leicester City where two League Cup triumphs had alerted more fashionable clubs.

On May 26 2001, the charismatic O’Neill was on the cusp of becoming only the third manager in the Hoops history to achieve the domestic treble, equalling the feat of the legendary Jock Stein in 1966/67 and 1968/69.

A meeting with Hibs at Hampden between the new boss and club folklore and Scotland’s national stadium was packed in the midst of glowing sunshine to witness the occasion.

Author Alex Gordon highlights O’Neill’s remarkable debut campaign at Parkhead in his latest Celtic book, ’50 Flags Plus One’, where he examines the 51 untainted titles won in the club’s glorious history.

In another CQN EXCLUSIVE, Alex details the impact of the single-minded gaffer in an edited extract from his fifteenth tribute publication to Celtic.

THE championship – the thirty-seventh in the club’s history – was delivered on Sunday, April 7 in front of a crowd of 60,440, the biggest in Scotland throughout the season.

There were five games still to go when St Mirren turned up in the east end of Glasgow in the forlorn hope of postponing Flag Day and the crowning of new champions. Johan Mjallby and Alan Thompson hit the woodwork, Henrik Larsson proved he was human by fluffing his final effort with just keeper Ludovic Roy to beat and a variety of other efforts flew high and wide. It was left to Tommy Johnson to snatch the glory goal seven minutes from the interval. 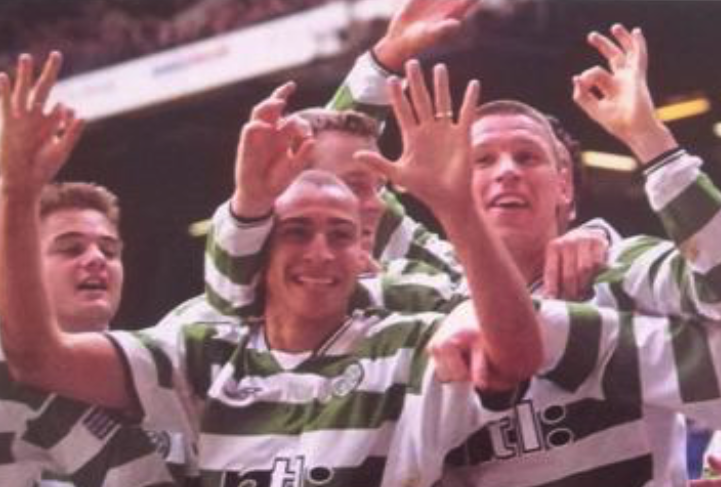 HAPPY 50th, HENRIK…Swedish superstar Larsson celebrates his 50th goal of the season in the 3-0 victory at Ibrox.

READ ALL ABOUT IT…Alex Gordon’s fifteenth Celtic book covers all 51 of the club’s untainted titles.

The Premier League championship arrived in style with the total points tally of ninety-seven setting a new record, seven better than the previous best. It was also won by fifteen points from Rangers, a remarkable thirty-six-point swing in a year.

Martin O’Neill’s side already had the League Cup in the trophy cabinet following Larsson’s hat-trick in the 3-0 romp against Kilmarnock at Hampden on March 18. After the victory over St Mirren, Celtic were one step removed from their first domestic treble since the heady days of the legendary Jock Stein in 1969. Hibs barred their way to the milestone, the Edinburgh side lying in wait after reaching the Scottish Cup Final which would bring down the season’s curtain at the national stadium on May 26. 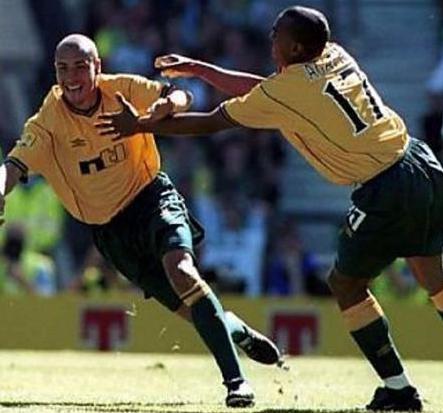 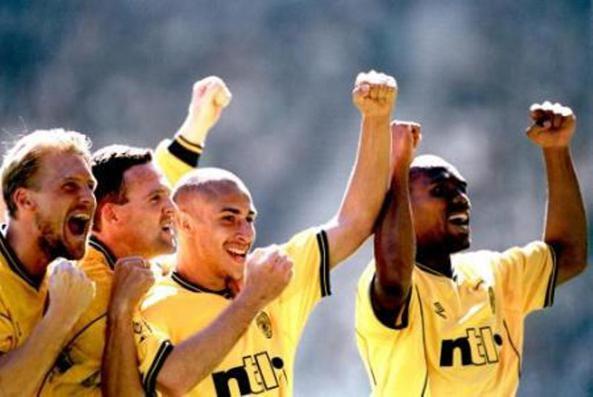 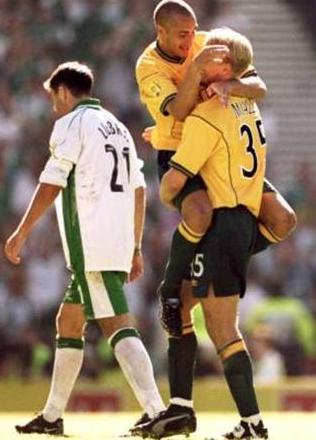 SWEDE DREAMS…Henrik Larsson and his fellow-countryman Johan Mjallby share the joy on May 26 2001.

Henrik Larsson fired in a double after Jackie McNamara, an early replacement for the limping Lubo Moravcik, had got the ball rolling to record a successive three-goal Hampden showpiece celebration.

A smiling Martin O’Neill concluded: “It’s been an enormous season for everyone and to finish it off today in front of our supporters at a packed Hampden is just sensational. Today is about the players and the supporters. I’m so, so pleased for both sets. The players have had to rouse themselves again for another big occasion, but I never thought there would be a problem because there is no sign of tiredness. Jackie took his goal magnificently and the second from Henrik so soon after half-time settled everything.”