RYAN CHRISTIE’S remarkable fairytale continued at Hampden today when he scored the goal that won a seventh successive domestic trophy for Brendan Rodgers.

The midfielder has somersaulted from bit-part player in the Hoops’ plans to become a key component.

And he emphasised that fact again against the Dons with a first-half stoppage-time goal that settled a tough, tense Betfred League Cup Final occasion in front of a frenzied crowd at the national stadium.

Dedryck Boyata had just recovered from a sickening clash of heads with his ex-colleague Gary Mackay-Steven to send a clever long ball towards the enemy penalty area.

Christie timed his diagonal run to perfection as he got in behind the Dons rearguard with Shay Logan attempting to cover for his centre-backs.

The Highlander took an exquisite touch and fired a right-foot shot at goal that was blocked by the heroic Joe Lewis.

The rebound spun back to the Celt and this time he made no mistake with a venomous left-foot effort that kissed the underside of the crossbar on its way into the net.

At the end of a hectic, rollicking, frantic afternoon that turned out to be the goal that presented the trophy back to the holders – and signalled the astounding treble treble could now be on big-style.

Scott Sinclair squandered the opportunity to double the advantage eight minutes after the turnaround when he missed a penalty-kick.

To be absolutely fair, it didn’t look a deliberate handball from Dominic Ball and it also looked just a yard outside the area.

However, a spot-kick was awarded and possibly justice was done when Lewis plunged to his right to beat Sinclair’s drive to safety.

Right from the first shrill of referee Andrew Dallas’ whistle it was obvious the Dons were out to frustrate the Hoops.

Celtic were tasked with attempting to shake off the shackles and it looked as though they had managed that feat in the seventh minute when Cup Final expert – and Dons’ hoodoo man – Rogic had opened the way to triumph.

The Aussie midfielder accepted a pass from Forrest, rolled it onto his left foot and from 25 yards whizzed a low drive past the desperately diving Joe Lewis.

However the cries of “Goal!” from the Hoops contingent were silenced immediately when the ball thudded against the outside of the right-hand post and bounced harmlessly out of play. 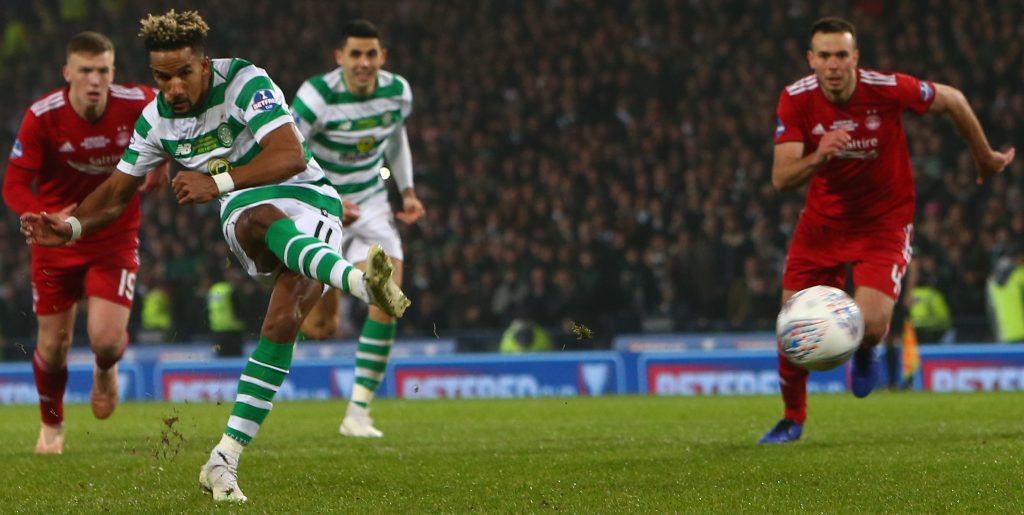 SPOT-KICK SINNER…Scott Sinclair fires in his penalty-kick – only to see it saved by Joe Lewis.

Two minutes later, the Pittodrie outfit escaped again when a wayward kick from their keeper found Edouard. Unfortunately, the £10million French ace was sloppy with a pass to Forrest and the chance was lost.

In the 16th minute, Considine was rightly flagged offside when he thumped in a close-range drive following a left-wing corner-kick.

Scott Bain got down superbly to block the effort, but the standside match official had already spotted the infringement. However, credit the understudy keeper for lightning reflexes.

Amazingly, Forrest was the first player to be booked when Dallas decided he had attempted to stamp on the challenging Lowe. The Dons left-back responded by pushing the winger in the back in a show of anger.

Nothing seemed evident – TV pictures certainly didn’t flag up an obvious offence – but the match officlal still flashed a yellow at the Scotland international and ignored the actions from the left-back. Bewildering!

The Final was held up for almost 10 minutes following the collision between Boyata and Mackay-Steven who both went for a right-wing cross from Logan. The Belgian had to be helped off with blood on his shirt and he required some treatement on the touchline before returning with his head covered in bandages.

His former team-mate wasn’t so fortunate and had to be stretchered off and taken immediately to hospital. Thankfully, manager McInnes could confirm he was concious and speaking at the end of the game. 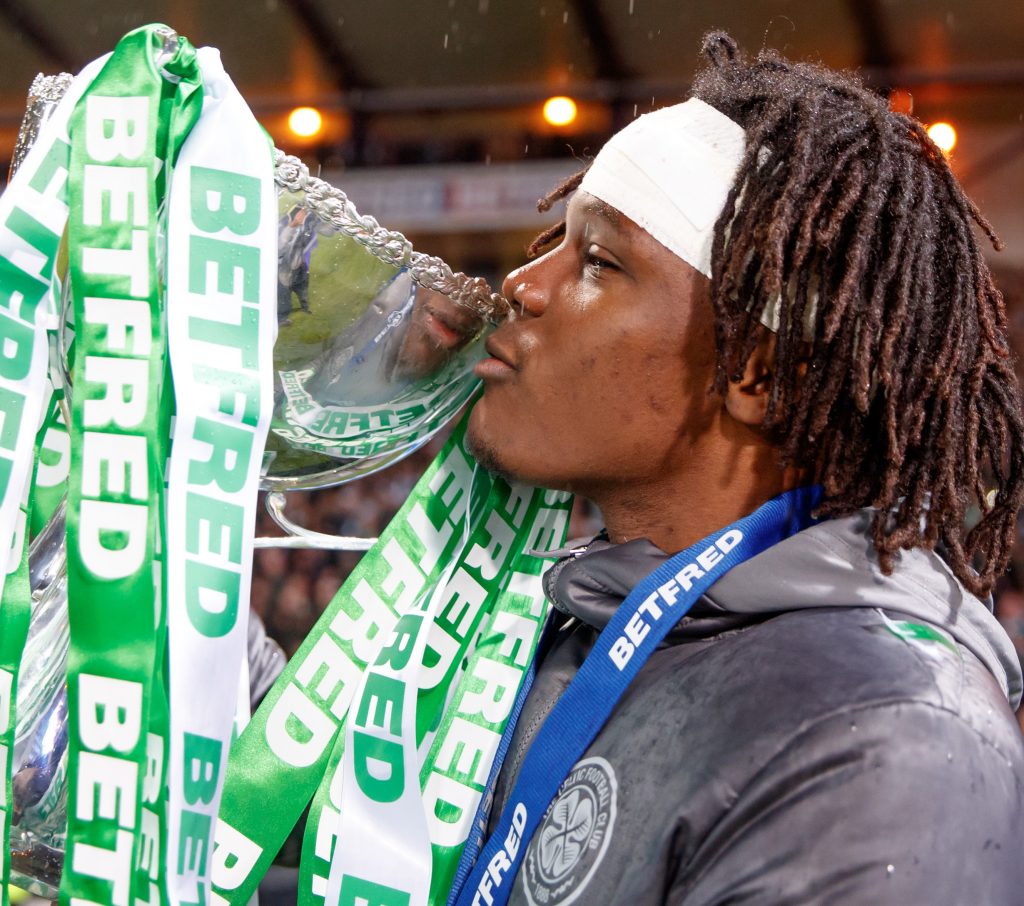 Boyata limped off in the 60th minute to be replaced by Jozo Simunovic and, incredibly, the Croatian almost netted an equaliser for the Dons with his first touch.

He swung wildly at a high cross into the box and the transfixed Bain was helpless as the ball clattered off the junction of bar and post and, thankfully, bounced away.

Celtic, who also brought on Scott Brown and Olivier Ntcham for Rogic and Forrest to keep things tight nearing the end of the confrontation, had their chances to kill off the game.

Notably when Sinclair was sent through after a lung-bursting 40-yard run from McGregor saw him push a pass into the Englishman’s tracks inside the box. However, underlining this was not to be his finest game in a hooped shirt, he carelessly lifted the ball over the crossbar.

Edouard, too, could have cemented the triumph in the fading moments when he dashed forward and had four team-mates screaming for a pass. However, the striker saw his name in lights and went for it himself.

His tame effort was blocked and Celtic had to withstand another counter-attack.

When the smoke of battle cleared, Brendan Rodgers had won hiss 22nd domestic Cup-tie in his 150th game as Hoops manager.

And Celtic can now set their sights on the treble treble.