Celtic Quick News on News Now
You are at:Home»Latest News»21 YEARS AGO: ‘WE LIT THE FUSE,’ O’NEILL ON HIS TRAIL-BLAZING HOOPS
By CQN Magazine on 1st June 2021 Latest News

MARTIN O’NEILL admits his five years at Celtic are only surpassed by the achievements of Jock Stein’s Lisbon Lions.

The ebullient Northern Irishman took over at Parkhead exactly TWENTY-ONE YEARS ago today to kick-start a silverware landslide.

And O’Neill insists the class of 2003 should have followed Stein’s side by lifting a European trophy.

He quit Leicester City to arrive at the Hoops in the aftermath of the dream team of Kenny Dalglish and John Barnes that had backfired so spectacularly.

The Liverpool double-act didn’t quite deliver the expected dividends and Barnes was fired following the Scottish Cup exit from Inverness Caley Thistle in February 2000.

Dalglish, who has been appointed Director of Football, took over dug-out duties and delivered the League Cup following a 2-0 victory over Aberdeen in the Final. 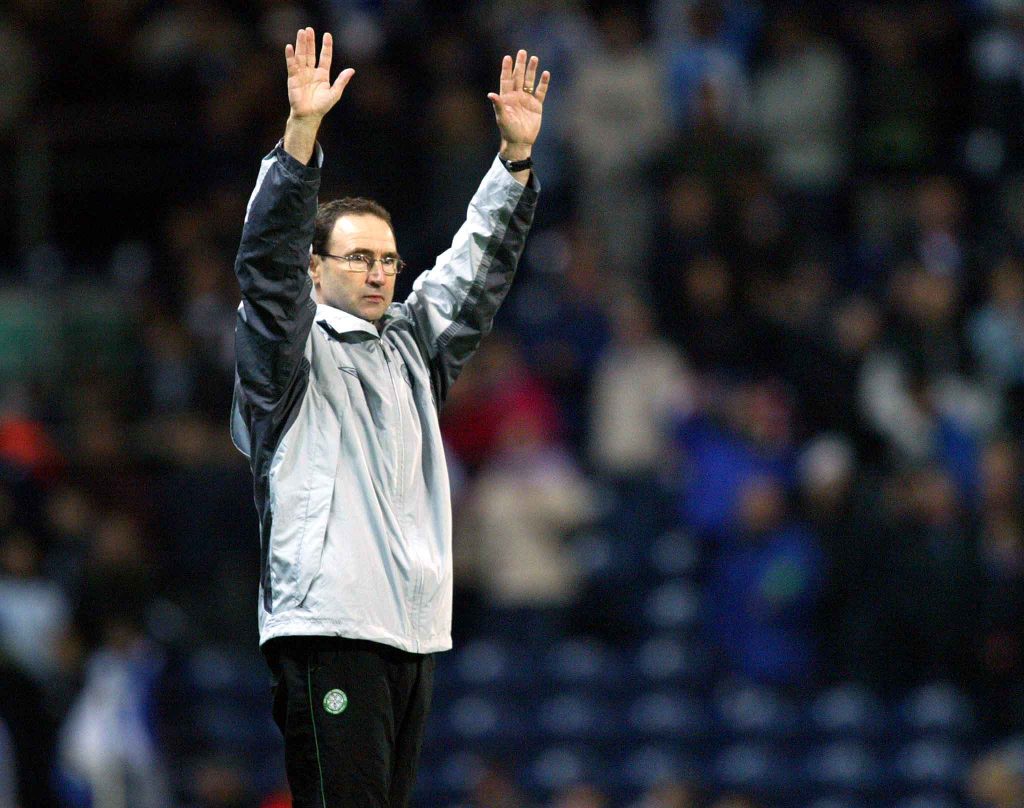 HAIL HAIL…Martin O’Neill accepts the accolade of the Celtic fans.

O’Neill was brought in on June 1 2000 and he led the team to their first treble in 32 years following Stein’s side in 1968/69, their second such feat in three years.

He went on to win three championships, three Scottish Cups and a League Cup – as many trophies as the Hoops had picked up in the previous EIGHTEEN years.

There could have been more silverware – the 2003 title was lost on goal difference before the Hoops blew the crown on the final day two years later.

O’Neill, though, is still upset the team conceded the opportunity to add continental success to his list when they lost 3-2 in extra-time to Jose Mourinho’s Porto in Seville in 2003.

The ex-Republic of Ireland international manager said: “I still think the team we built should have won the UEFA Cup against a Porto side who would go on to win the Champions League a year later.

“We would all say that the best and most celebrated Celtic team is Stein’s 1967 side.

“It would be impossible to emulate that European Cup win and their glorious achievements.

“I’ll confess to not knowing too much what Celtic would have looked like in the thirties, fifties and whatnot, but I don’t think since 1967 there was a better Celtic than the one from our era. 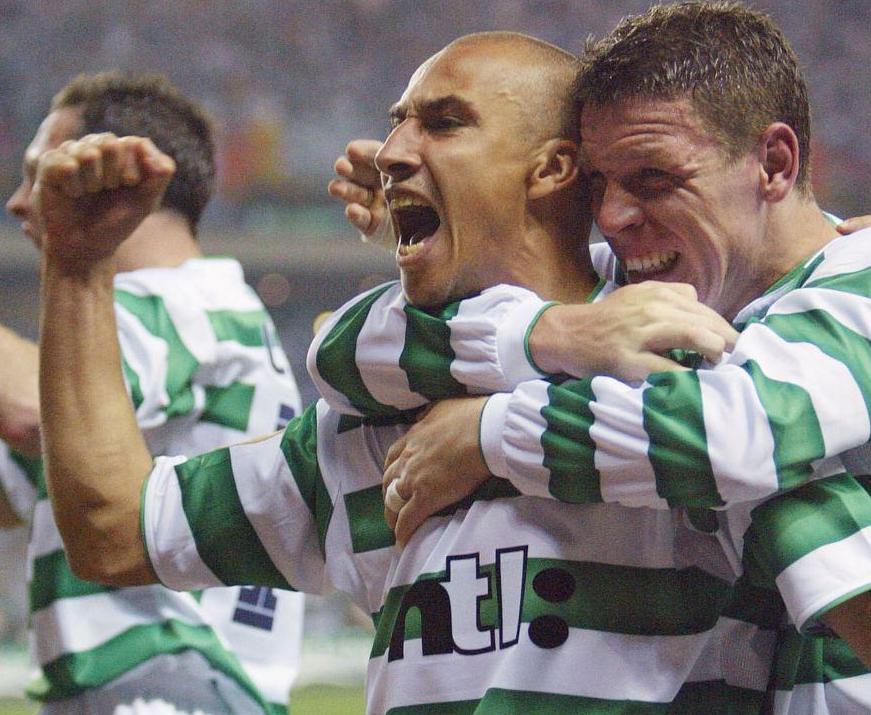 HOOP HOOP HOORAY…Henrik Larsson is congratulated by Alan Thompson after one of his goals against Porto in Seville.

“We had young guys like Stiliyan Petrov who was energetic and hungry, we had the finesse of Henrik Larsson and Chris Sutton’s intelligence.

“We had real firepower down the flanks with Didier Agathe and Alan Thompson, we had the power of Bobo Balde in defence.

“The balance of that team was great, but it was the way they gelled together which made them a very good side.

“And what is frequently overlooked is that when it came to European football, they were all relative novices.

“We were playing against Juventus and Bayern Munich and never once did we think that we couldn’t compete. Whatever they might have stood accused of in terms of deficiencies there would be no-one who could have faulted a lack of spirit or endeavour.”

Prior to O’Neill’s arrival, Celtic had won just three titles in 18 seasons – in the last 21 years they have won 15 championships.

O’Neill added: “I think we lit the fuse. The place was just waiting for an enormous lift.

“You are sitting back and watching your rivals take over, you are playing second fiddle and it settles on you as a club.

“You wonder when you are ever getting out of the mess. Celtic were in the doldrums and I think we lifted it. 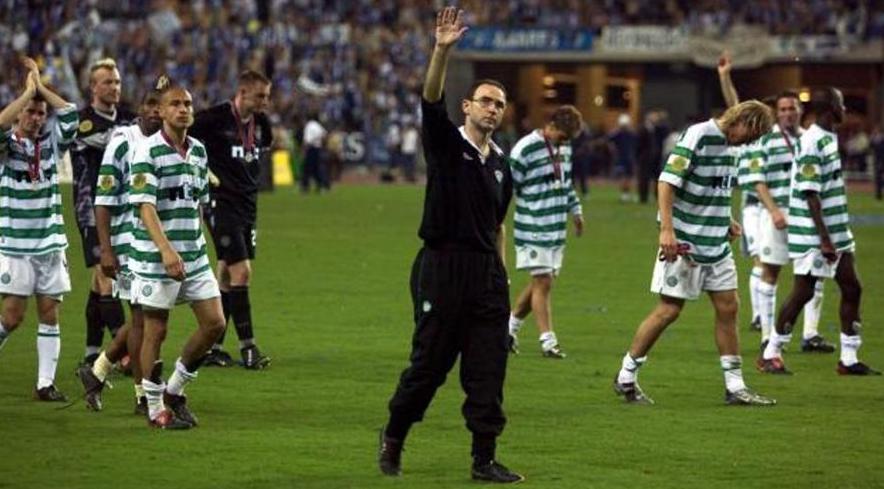 FINAL FAREWELL…Martin O’Neill and his crestfallen Celtic players acknowledge the supporters at the end of the epic UEFA Cup showdown in Seville in 2003.

“Without wanting to be too immodest, I do think that team was the forerunner. I remember talking to the Lisbon Lions when I was just getting my feet under the desk.

“I always remember their message being that, as Celtic fans, they would have a little bit of hope for a month or two then it quickly dissipated.

“The way we broke Rangers’ stranglehold would have been significant. When I first arrived, Dick Advocaat signed a load of players. He said that he wanted one team for the league and one for the Champions League.

“Well, you hear that kind of thing, you’re thinking: ‘Well, that might come back to bite’.

“Rangers were going into the Champions League and we were having to play a qualifier against Jeunesse Esch just to get into the UEFA Cup. But that was where we were as a club.”

Twenty-one years on, Celtic are back in the position of having to press the reset button. Let’s hope the Hoops hierarchy get it right – as they did with Martin O’Neill in the summer of 2000.