DAVID TURNBULL turns 22 today – but his birthday celebrations will be put on hold as he hopes to be involved in the action when Celtic take on Charlton in Newport this afternoon.

The Scotland international playmaker is one of the Hoops players Ange Postecoglou will be scrutinising as he prepares his squad for the rigours ahead.

The Parkhead side will face FC Midtjylland in the first leg of their Champions League second round qualifier in Glasgow in 10 days’ time and the return is due in Demark eight days later.

Turnbull got off to a false start following his £2.75million arrival from Motherwell in the summer and it took until December 10 and his Man-of-the-Match performance and winning goal in the 3-2 Europa League Group triumph over Lille to show he will be money well spent.

ON THE BALL…David Turnbull is in control.

He picked up his first medal when Celtic overcame a stubborn Hearts side 4-3 in a dramatic penalty-kick shoot-out five days before Christmas to lift the Scottish Cup and seal the phenomenal quadruple treble. Unfortunately, that was the only bright spot in a season that fell part and cost Neil Lennon his manager’s job in February.

However, this is a new era under the infuence of 55-year-old former Australia international manager Postecoglou and the birthday Bhoy is eager to play a major role.

The Hoops face Charlton today in their second pre-season friendly match in Newport after beating Sheffield Wednesday 3-1 in midweek at the same venue.

Turnbull, speaking to the club website, said: “It’s been a good week of training since we arrived and the boys who played the other day have done a wee bit more. It’s all building towards the first competitive game, but today will be a real challenge.

“We didn’t have much of a break, so we had to do a wee bit on our own and then straight back into it after a week off. 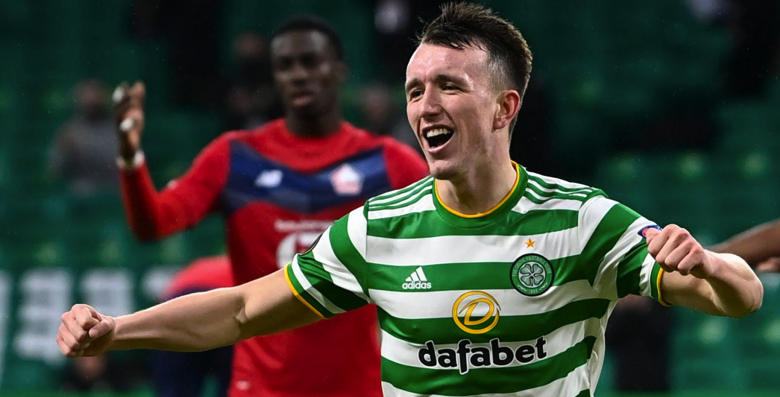 PARADISE…David Turnbull announces his arrival with winner against Lille at Parkhead in December.

“It’s been brilliant getting to see everyone again and meeting new faces and it’s been a great start to the week.

“It’s still pre-season, so it’s about building up the minutes and getting ready for the new season. That’s what we’re looking to do this week and, hopefully, most of the boys will get the chance to do that.”

Turnbull added: “The qualifier is sooner than you might think. We’re only just over a week away and that’s great for us really, getting straight back into it after not too long off. These few games in pre-season will stand us in good stead going into it.

“It’s about training well every day as hard as you can and taking that into games week in, week out. Sometimes we have midweek games, so there’s not much rest, but that’s what we thrive off and, hopefully, we can do more of that this season.

“I’m looking forward to it. The games come thick and fast and there’s not really much more you can ask for as a player. It’s about getting down to work now, getting a few games under our belt and see where it takes us.”