CELTIC’S £2million new Bhoy Vakoun Issouf Bayo drew a blank as he worked on his match fitness during the Hoops’ 4-1 Reserve League win over Falkirk at Cappielow yesterday.

The Ivorian international striker had not started a competitive game since playing for his Slovakian club Dunajska Streda on December 8 before the country’s winter shutdown.

Brendan Rodgers has been eager to see the powerful frontman in action and Bayo came within seconds of making his first appearance at Parkhead last Wednesday when he was ready to come on as a substitute against Hibs with eight minutes left to play.

Unfortunately, the Hoops boss had to have a swift change of mind when Emilio Izaguirre had to be carried off after a wayward challenge from the Easter Road side’s defender Darnell Johnson. 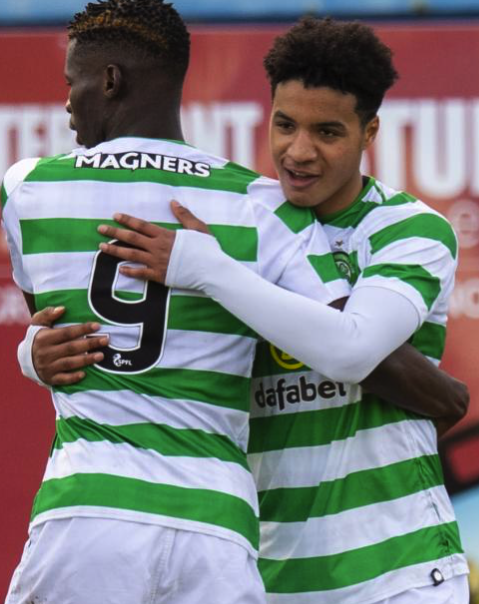 CONGRATULATIONS…new Bhoy Vakoun Issouf Bayo celebrates with Armstrong Oko-Flex after one of the teenager’s two goals.

However, Bayo was in from the kick-off in a Celtic line-up that won with doubles from youngsters Jack Aitchison and former Arsenal prospect Armstrong Oko-Flex.

The 22-year-old attacker leader played for 62 minutes before coming off.

He had three chances to get on the scoresheet, but was denied by a smart save from ex-Hoops youngster Leo Fasan and narrowly missed the target on two more occasions.