MICHAEL DAVITT – patron of Celtic in 1892- was a political activist and land reformer born in Straide, County Mayo during the great hunger in 1846.  His peasant family were evicted from their home by absentee landlords, and with Michael aged four they eventually under hardship, settled in Haslingden, Lancashire where his upbringing took place. 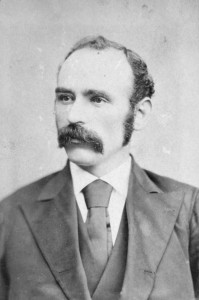 As Celtic Football Club were moving tenancy to their new home at Celtic Park  in 1892, Davitt, now in his forties, was invited to perform the perambulation and the ceremony of laying a sod of Donegal turf in the centre of the new pitch by the Celtic committee.  Many of the office bearers of the early Celtic were active in the prominent Irish community in Glasgow at this time and were supportive of his political ideals.

Davitt was a popular choice being at the height of his influence in the Irish agrarian struggle, and was a major cog in the formation of the Irish National Land League around 1880.  The Land League opposed absentee landlordism and campaigned for the three F’s. (Fixity of Tenure, Fair Rent and Free Sale)

Michael had lost an arm in a cotton factory accident as an eleven year old and a benefactor provided for his education. In his teenage years he studied Irish history and was interested in the Chartist movement which sought political and electoral reform for the working class man in Britain.

His active membership of the Irish Republican Brotherhood and the Fenian movement occupied his younger years before he gave up aggressive struggle to try and achieve his aims by peaceful methods, after spending over seven years in penal servitude in Dartmoor prison. 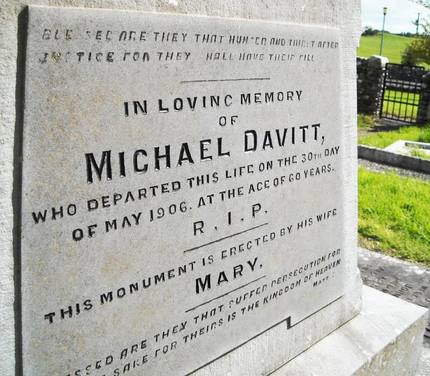 He wrote in his “Leaves from a Prison Diary” about violence being self defeating and using his time while incarcerated as a learning curve.  Even after release, his rebellious nature ensured he was arrested and jailed on occasion for “seditious speeches” against the government.

Davitt was also responsible for adding a new word to the English dictionary.  In the autumn of 1880 the Land League requested a reduction in rents because of a poor harvest of crops.  A land agent named Captain Charles Cunningham Boycott refused and the tenants grouped together and refused to co-operate with reaping the harvest.  Boycott was forced to bring in compliant labour from the north at considerable cost.  He was compelled to return to England as a result.  The new word “Boycott” was coined to describe the shunning of any persons or organisations and was used many times by the Irish Land League to get the upper hand in the land struggle.

Davitt also campaigned for home rule in Ireland and his efforts may have had a better outcome had the Parnell affair, the divorce of Captain O’Shea and the scandal it attracted in Victorian times.

It is with this background Davitt arrived in Glasgow to perform the dual role of laying the Donegal turf and speaking at the City Halls just after St. Patrick’s Day in March 1892. 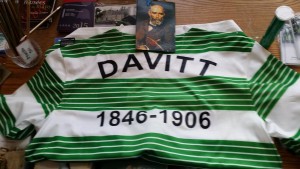 Michael Davitt was accompanied from the original Celtic Park to the new ground for the ceremony before a home match with Clyde F.C. by a large contingent of Celtic committee and others who were connected with Celtic.

The local press reported, “Mr. Davitt after laying the sod which came from Donegal this morning, and which contained a splendid bunch of shamrocks growing in the centre, said that he was delighted to have the honour of laying the centre sod of the new park which belonged to the Celtic club.  He could assure them that the prowess of the Celts was well known and appreciated by their countrymen beyond the sea, who were proud to witness the efforts of an Irish team in Scotland.  He hoped that they would have much prosperity on their new ground, and that no Saxon would be able to cross the sod of Irish turf now laid, without sustaining defeat. (Applause)” 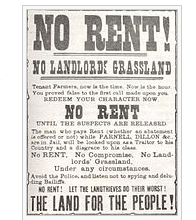 Mr. Davitt then adjourned to the old Celtic Park where he kicked off the ball in the match between the Clyde and the home team, his act being warmly cheered by the large crowd present.  After the match, the two clubs met in Pinkerton’s Hall, Main St. Bridgeton where after a sumptuous supper, The Celtic were presented with the Glasgow Cup and Gold Badges.

Michael Davitt who accepted the cup on behalf of Celtic, was attending his first football match in over twenty years and excusing himself for leaving the match early to fulfil a public speaking engagement, continued;

“I have never felt sicker of politics than I did that afternoon when I had to leave that splendid exhibition of football being given by Clyde and Celtic to attend a political meeting.” 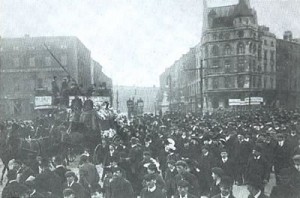 Later before breaking for the evening a committee meeting was held in a side room where Michael Davitt was presented with a badge “That they hoped he would accept from them as a proof of their very great esteem for him as an Irish patriot.  There was no man deserved such respect as a man who spent his life in his country’s cause. (Applause)”

Mr. Davitt in accepting the gold badge said, “He would wear it and cherish it as a gift from a body of Irishmen, who in the opinion of their opponents of that afternoon, are the premier club of Scotland.”

Only weeks after laying the hallowed Donegal turf with a silver ornamental spade it was stolen by persons unknown whose motive is unclear as well.  A poem published at the time eloquently celebrates Michael Davitt’s participation in the ceremony; “On alien soil like yourself I am here,
I’ll take root and flourish, of that never fear;
And though I’ll be crossed sore and oft by the foes,
You’ll find me as hardy as Thistle or Rose.
If a model is needed on your own pitch you’ll have it,
Let your play honour me and my friend Michael Davitt!”

This was a turbulent period in the life of Davitt as he was unseated twice as a Member of Parliament and was also declared bankrupt.  Undeterred, at the end of the century he was to lead and support the United Irish League, an Irish nationalist political party whose motto was “Land for the People.”  Never afraid to follow his conscience he resigned as a Member of Parliament in 1899 in protest over Great Britain’s role in the Boer War in the Transvaal.

Davitt died in 1906 in Elphis Hospital Dublin and by then had travelled extensively to champion not only the Irish Agrarian and Home Rule campaigns, but injustice in causes he encountered elsewhere during his life.

He had visited South Africa in support of the Boers and wrote a book on it.  Australia and New Zealand were other places, where he lectured over 70 times concerning the Aboriginal and Maori inequality including land issues.

America where his sisters and mother had settled in 1873 welcomed him to promote the Irish cause, raise funds and garner support later in the decade.

He also spoke up strongly against anti-Semitism and had travelled to the Holy Land.

A plaque is also mounted in Portree on the Isle of Skye where he visited to speak on land reform. Davitt is quoted on his visit to the isles;

“My advice to the people of Portree and the people of this island is, not to be satisfied with half measures of change, but to go in for what is your just and your natural right, the ownership of the land of Skye for its people.” 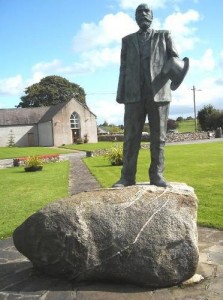 Davitt requested to be buried in Ireland should he die there. The public sympathy before his funeral was remarkable as twenty thousand people filed slowly past his coffin at the Carmelite Friary, in Clarendon Street. The family had desired a private service but the respect that was shown by the Irish people was self evident.

Celtic patron Michael Davitt’s contribution to Celtic’s history is fleeting but at the time he represented  what the clubs founding fathers with Irish backgrounds were passionate about themselves; an Irish identity.  Why would Michael Davitt otherwise be invited to carry out this inauguration ceremony at the new Celtic ground?

Michael Davitt is buried at his birthplace in Straide, Foxford, County Mayo where there is a museum to commemorate what he achieved in his life. 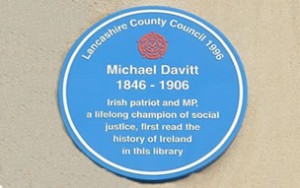 Written by Iain Reynolds for CQN. We first posted this a month or so ago but wanted to re-publish on the anniversary of Michael’s passing.