Celtic Quick News on News Now
You are at:Home»Latest News»30 TODAY – AND IT’S A KNOCK-OUT FOR FORREST
By CQN Magazine on 7th July 2021 Latest News

JAMES FORREST will be missing in a action as he celebrates his 30th birthday today.

The Celtic History Bhoy’s hopes of hitting the ground running in the new era under Ange Postecoglou were hit when he was sidelined due to a Covid issue.

Forrest hoped to mark his big day with an appearance in this afternoon’s closed-doors friendly against Sheffield Wednesday in Newport, but, instead, will be absent.

The unlucky winger sat out most of the wretched campaign last season with an ankle injury and was sorely missed before returning late in the term. He also made a brief appearance as a second-half substitute in the Scotland’s opening Euro Finals tie last month when Steve Clarke’s side lost 2-0 to Czech Republic. Bizarrely, the experienced forward was overlooked for the matches against England and Croatia as the Scots exited the competition.

Celtic confirmed on Twitter that Forrest was not present at the camp as he had been identified as a close contact of a coronavirus case. 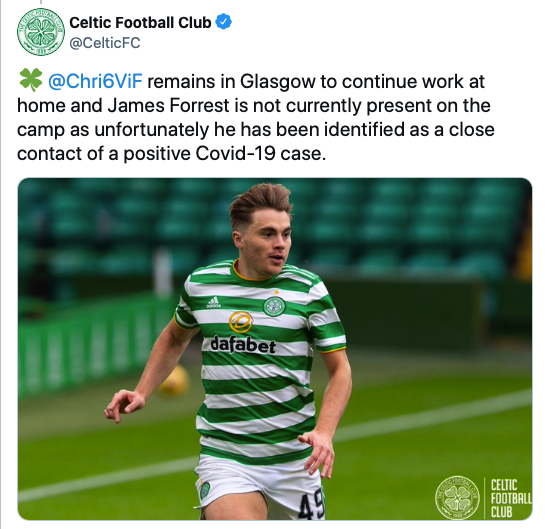 Centre-back Christopher Jullien, who hasn’t featured at all this year, is also still in Glasgow as he works on his fitness following a long-term knee injury.

Forrest will be hoping to make up for lost time when the season finally gets underway with the first leg of the Champions League second round qualifier against FC Midtjylland due at Parkhead in just under a fortnight’s time.

The Birthday Bhoy is now the only player at the club who has played in all nine-in-a-row campaigns following skipper Scott Brown’s departure for Aberdeen.

Forrest has joined the legendary trio of Billy McNeill, Jimmy Johnstone and Bobby Lennox as Parkhead idols who have achieved the feat in the past during the great days of the Jock Stein era when the club claimed the crown from 1966 to 1974.

He made his debut for the team under the guidance of first-time-around Neil Lennon on May 1 2010 when he scored a goal in a 4-0 win over Motherwell. As fae decreed, the flanker also claimed the first goal of the Irishman’s return game when he knocked in the opener in the 2-1 victory over Hearts at Tynecastle with Odsonne Edouard slotting in the stoppage-time winner on February 27 2019.

Forrest has picked up an impressive 19 honours since his breakthrough over 11 years ago and is determined to add to his haul under the guidance of Postecoglou.