PICTURE the scene if you will.

At maybe 11:30pm last night I find myself sitting with a cup of tea about ten rows back from the Directors box in the South stand at Celtic Park.

Immediately to my right sits The Angel Gabriel of this Parish, and slightly further on, in the row in front, sits The Minx. Immediately in front of her sits Hamilton Tim who is engaged in conversation with another Celtic Fan who is doing the sleep out. 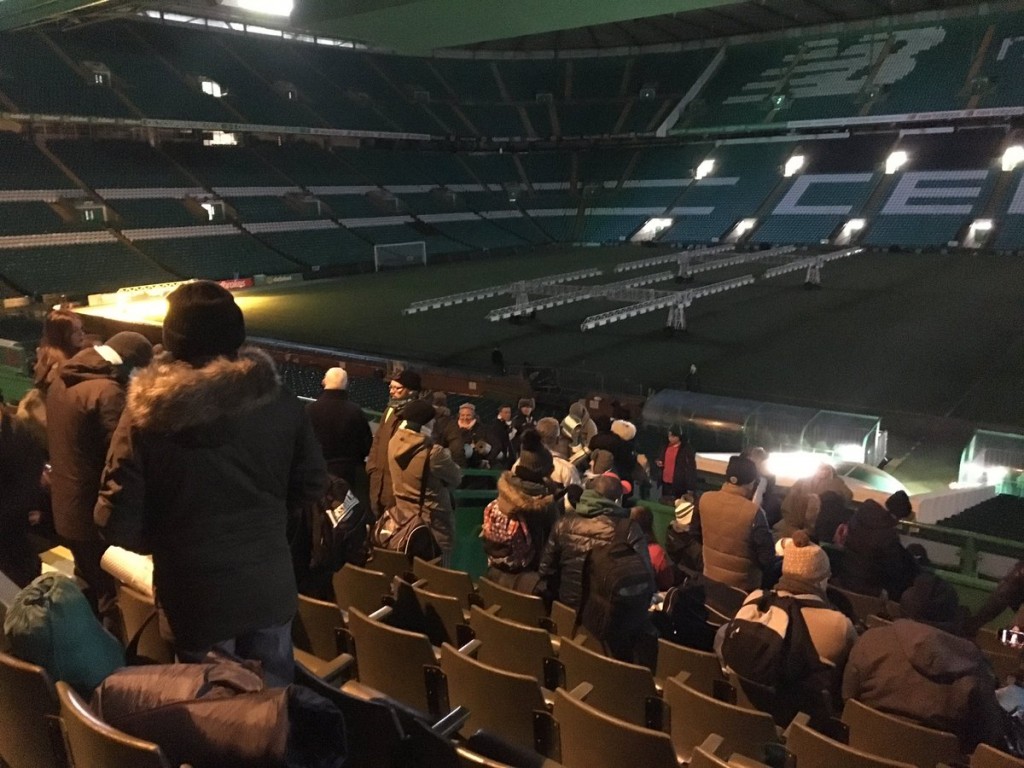 It is always a pleasure and a privilege to sit and chat with big Fraser (Angel Gabriel) and last night we exchanged some views on something we have in common which affects our respective loved ones.

However, in a change of topic the big man suddenly says:

“That;s the first time I have ever walked out of the Tunnell. Gee, even in the dark of night that is awesome. Hugely inspiring.” and he says the words somewhat like an awestruck child.

As we look down from the stand there are already about 60 or 70 folks laid out on the track beneath the South stand. They are lying on foil mats, huddled in sleeping bags, all along the track and out in the open. From what I can see no one looks comfortable.

Someone who is not on the track is Tom Boyd. He is not doing the sleep out and he makes it plain that soon enough he will be off to his nice warm bed and he promises me, with yon wicked grin of his, that he will think of me when his head hits the pillow.

The former Celtic Captain is here only to cheer on those who are sleeping out for charity.

Where, once upon a time, we all cheered him coming out of that tunnel and performing in this stadium, he is now here cheering on us in our 8-hour long performance.

In due course, he comes up to where we are sitting and Angel Gabriel tells him how mesmeric it was just to walk out of the tunnel, even at night and asks ” Does that thrill, that sense of excitement ever go away as you get more used to it?”

TB immediately replies “Never!” “Every single time it just gets you.” he says and adds ” You should try it when this place is full. You can be in the huddle and, as captain, you can be speaking the greatest words you have ever spoken to someone who is no more than 10 feet away and you know they just can’t hear you!” 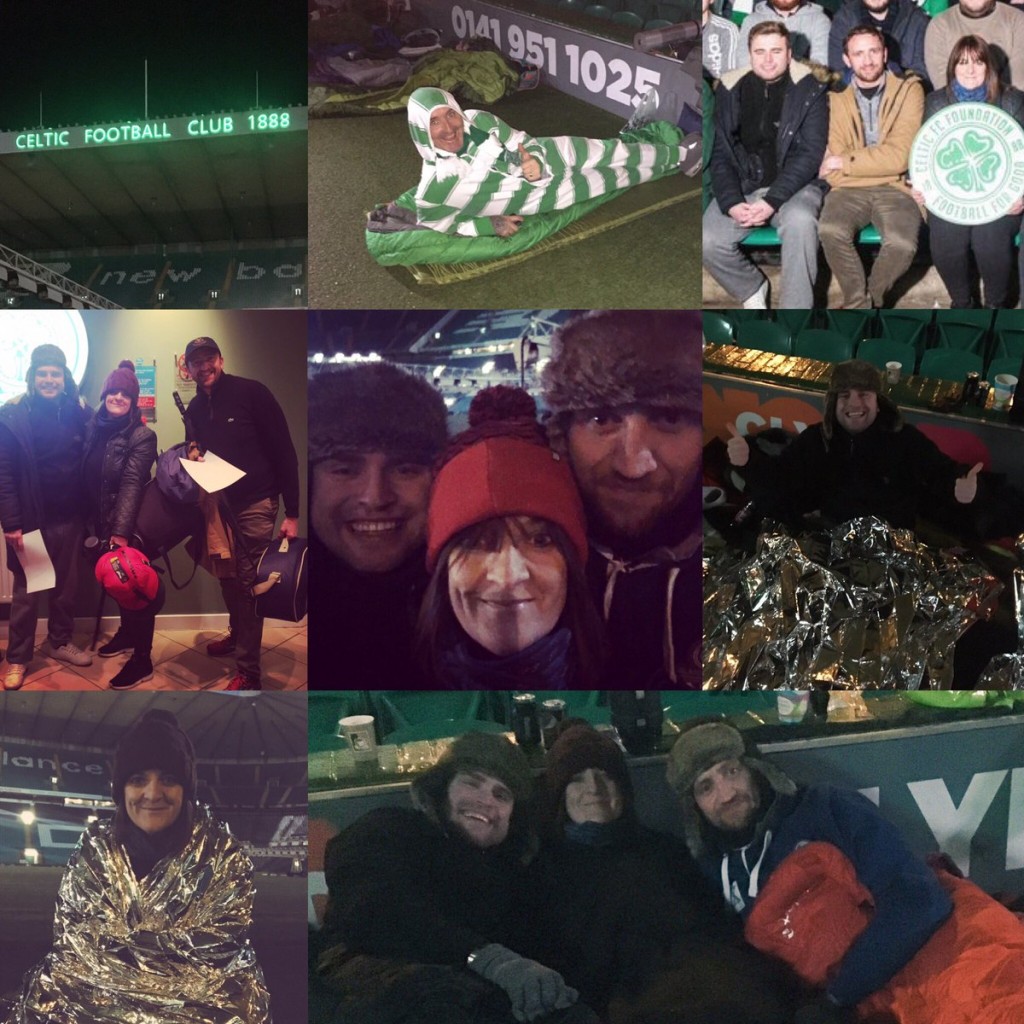 Tom stays and chats awhile but eventually moves on making sure that he has a word with every single person there, whether they are on their own or in a wee group like ours.

Earlier on, Tony Hamilton (CEO of the Foundation) expresses his gratitude to everyone who is taking part and Dermot Hill, from The Invisibles charity, says a few words about homeless people who sleep rough. How they might not speak to a single person during a whole day or for several days. How many, at times, see no hope, no future, no way of changing things and, worst of all, how many of them just feel forgotten.

What we are doing this evening helps by providing clothes, toiletries, food, sleeping bags and most of all some human kindness and personal contact which can and will make a real difference to some.

I have known Dermot for over 30 years; know how he hates speaking in front of any audience and how making such a speech is a real effort for him, and I watch as he gets slightly emotional as the plight of the homeless really gets to him.

Anyone who reads the Jack Reacher novels knows that Reacher has an internal clock which lets him know immediately what time it is. This is not such a far-fetched notion.

Personally, my internal clock wakes me up regularly at precisely 4:20am.

I did not sleep a wink last night but at precisely 4:20am I find myself all alone sitting in the very back row of the South Stand and I am alone with my thoughts.

In the pitch dark, Immediately opposite me, on the facing of the giant North stand, beam the bright green letters which simply say:

The green letters illuminate the dark and the three words sort of float there like a huge announcement. 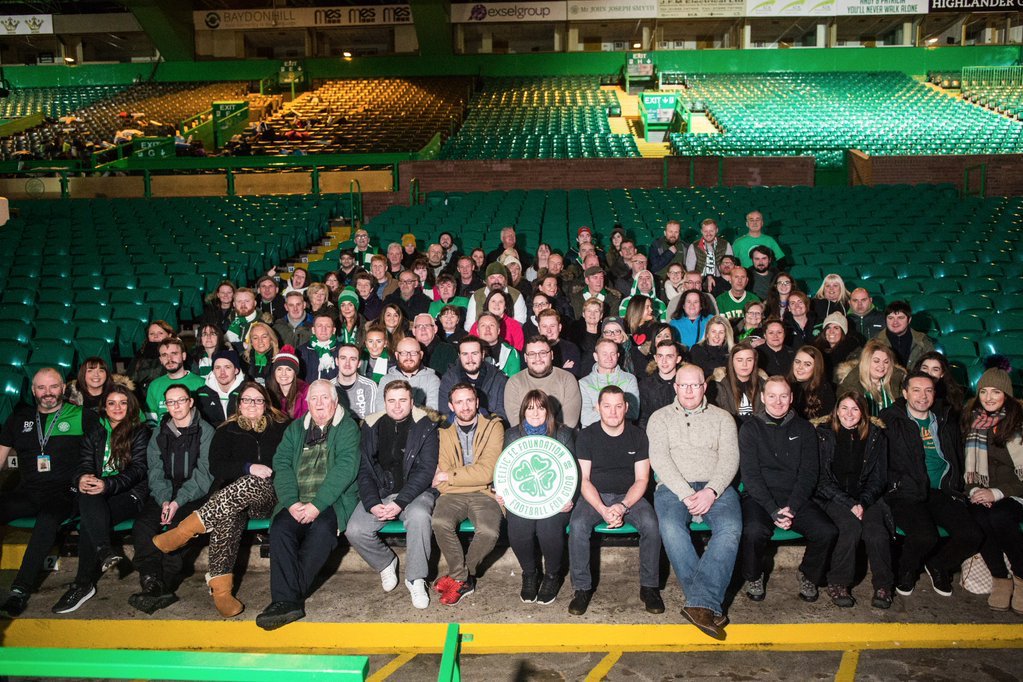 Looking down, I now see Minx with her head on HT’s shoulder wrapped in a foil blanket. Both appear to be asleep. Angel Gabriel is nowhere to be seen and I presume he has gone for a lie down somewhere between the rows of seats, as have many others.

Down on the track, in the main all is till. People are asleep or simply lying there.

I sit with a cup of tea and look down over the vastness of Celtic park and I see the dark, that great big green announcement and I see friend and stranger alike.

I am as at home at that moment as I would be if I were in my own living room.

I don’t feel the cold though others say they are feezing.

Foundation staff are seated nearer the front of the stand wrapped up as best they can be in sleeping bags and blankets. One says his nose is frozen off! JaneMaguire is texting or tweeting but definitely not sleeping — she can’t sleep in these conditions. Her 68 year old mother, on the other hand, is somewhere down on the track under a foil blanket. She manages a couple of hours.

Inside the tunnel area there are Stewards. One of them is “Big Jim” who I have seen at many events and working various sections of the ground and at the ticket office. He is talking to a guy in his seventies from Grangemouth.

You sometimes forget that many of the Stewards are fans and Jim’s discussion with others about players past and present reveals a Celtic man with knowledge.

Eventually I ask the chap from Grangemouth:

” Do you know Davy Morrison?”

And so he goes on to talk about Old Tim and the last time he saw him ( His name was McManus, Davy)

After, a long chat with various others I head out once again to my perch at the top of the South stand as that is where I have my flask of tea.

CELTIC FOOTBALL CLUB still beams out in the dark and again I look down and see people getting on with this as best they can. Some chat: Some sleep: Some shuffle around or toss and turn: Two girls are having a mighty tussle with the foil blankets and from up here they look like two giant Turkeys trying to find an escape route out of the tin foil.

My mind wanders to those who sponsored me to do this. Messages from Hrvatski Jim, Billybhoy, Jobo and a wee personal and very kind messages from Tony Donnelly who lost a close friend to bad circumstances and the elements. A message signed “Bono” and another which read “Sincerely L. Cohen”.

I think of the generosity of the Greenock Celtic Supporters Club, ACGR, the guys behind the Celtic Anthology Book, and all sorts of individuals.

A short time later, down on the track people are beginning to stir. Maybe they slept, maybe they didn’t, but they all look bone weary, cold, unnatural, and out of their comfort zone to varying degrees.

This wasn’t the worst of nights, the weather wasn’t at its worst and shelter was nearby with paramedics and safety near at hand. Yet it wasn’t a picnic either. It was an endurance event and every single person there will be much more comfortable tonight.

Inside, we have breakfast, there is a wee speech of thanks from Tony Hamilton and then people start to head off.

Dermot, myself, Big Jim the Steward, Jane Maguire and her mammy and two others start to get together the sleeping bags and foil mats which are to go to The Invisibles.

We have to bag the rubbish and take the good stuff down to the cars. I find it hard work. I am sleep deprived and I am now feeling it. I am tired. I say cheerio to various people and after all are gone just a few of us remain to clear away the sleeping bag evidence that we were ever there at all. There is a lot of it. We fill three cars.

Hopefully, the bags and mats will help some homeless folk get through other nights like this one where they huddle in doorways and under bridges instead of under a stand or on the track of a football stadium.

While the sleeping bags etc may help the physical condition, what of the emotional and mental one.

As I say final goodbyes I can’t help think of how some found tonight cold and uncomfortable and imagine how they would feel if they had to do this regularly and on their own away from the banter, chat and humour that we shared as a group? 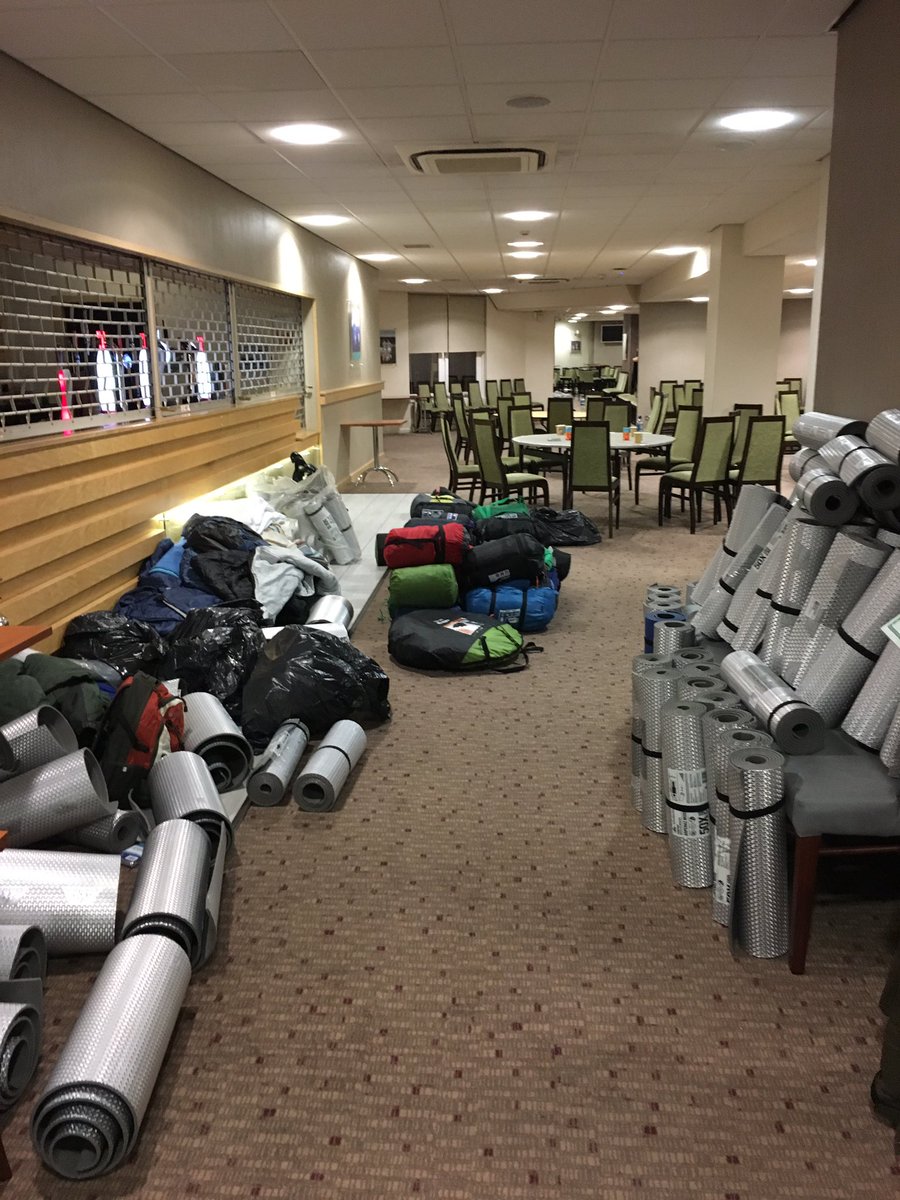 Being physically uncomfortable is one thing, but the mental and emotional torture of having no home to look forward to, no warm bed to go to, no warm shower to look forward to, no partner to love and be loved by (that doesn’t happen in homeless land on the street), No real friends to chat to, no worthwhile regular income to rely on, no tomorrow that spells “opportunity” and worst of all a constant erasure of hope and the feeling that nobody cares and that you are all alone — so completely alone.

That is the killer. That is what does for the homeless and the under privileged and the hungry. That erosion of the spirt and soul and the joy of your fellow man. Eventually, over time, that will suck all the hope out of you and kill you!

How do you counter that? How do you make that better?

Dawn is breaking over Celtic Park as I swing my car round in the car park. I am the last to leave as even the stewards have gone.

I reflect on the fact that the funds raised tonight will help 250 local families who face real hardship, and that homeless people will be given some cheer and some comfort in the winter months which might just help in the short term at least.

I think of those who took part, those who organised and those who sponsored, friend and stranger. What they did, why they did it and who they did it for and what else could be done for those whose spirits may be broken.

I wonder what help exists for those who are far less fortunate than me – than all of us?

The car turns and in the half-light of the early morning, the headlights catch a sign which describes a place, a group of people, a belief and a ray of hope.

It reads CELTIC FOOTBALL CLUB ……….. like a huge announcement!

If you want to donate, you still can.

Written by and initially posted by Brogan Rogan Trevino and Hogan on CQN on Sunday November 13. 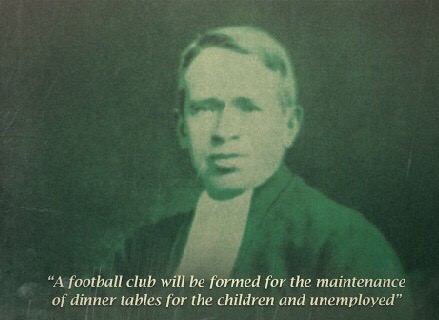