Celtic Quick News on News Now
You are at:Home»Lions & Legends»50 YEARS ON CELTIC CELEBRATIONS BEGIN FOR THAT SEASON IN PARADISE
By CQN Magazine on 14th October 2016 Lions & Legends

CELTIC will tomorrow begin the countdown to the most historic triumph in the club’s 128-year existence.
Jock Stein’s men, of course, overcame Inter Milan 2-1 to win the European Cup in Lisbon on May 25 1967 and the 50th anniversary celebrations are about to get underway.
They will officially start this weekend with visual tributes appearing along the Celtic Way in recognition of the men who played a part in that momentous 1966/67 season.
The display will be in place for supporters to enjoy before the Premiership match against Motherwell at Parkhead.
Celtic will also be launching a series of special events and releasing a collection of limited-edition memorabilia to mark the occasion.
The first celebratory event takes place on Wednesday when the Hoops take over Glasgow’s George Square to host a free Family Fan Zone ahead of their Champions League encounter against Borussia Monchengladbach.
Chief Executive Peter Lawwell said: “As a club and as supporters, we remain immensely proud of the achievement by Jock Stein and his players in winning the European Cup on May 25, 1967.
“By defeating Inter Milan in Lisbon, Celtic became the first British club to lift the trophy and it was achieved, as our legendary manager stated, by playing football, pure, beautiful inventive football.
“In this 50th anniversary season, it’s right that we not only remember the extraordinary achievements of that group of players – all born within a 30-mile radius of Celtic Park – but that we celebrate what still remains, to this day, a unique and remarkable triumph.
“All of us, as supporters, have a special affection for the Lisbon Lions. Throughout my time here at the club I have been fortunate enough to get to know them and, while they have become friends, they will always be heroes to me and to every Celtic fan.
“The Lions always remained humble despite the incredible success they enjoyed during their careers and they epitomise everything that is great about our football club.
“It’s also fantastic that the first of many events to celebrate the 50th anniversary of our triumph in Lisbon is a family event in the centre of Glasgow, and on the same day that the current team will be competing at the highest level of European football – a stage where we know Celtic belong.
“Our success in 1967 established Celtic’s reputation as a top European side, and it brought enormous pride, not only to Celtic, but to the city of Glasgow and, indeed, the whole of Scotland and beyond.
“That will always be worthy of celebration.”
CQN have released That Season in Paradise – Ten Months of Celtic Heaven which documents every kick of the ballin that magical 1966-67 season.
With unrivalled access to the Lisbon Lions this is an unmissable book for your Celtic collection.
That Season in Paradise is available now from Celtic Superstore and online from www.cqnbookstore.com 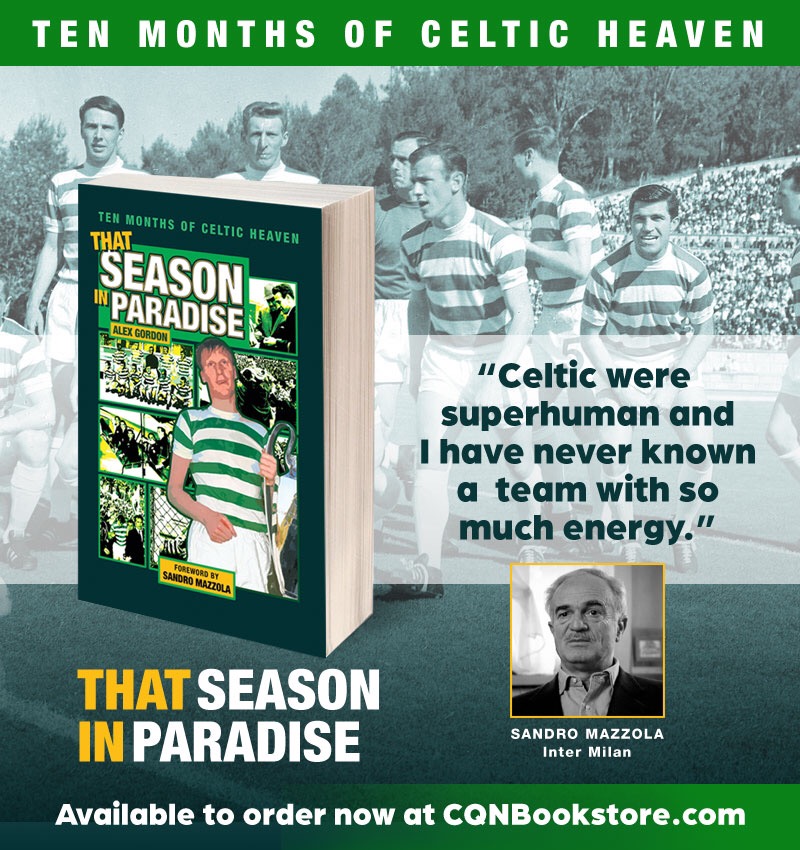