BRAZILIAN midfielder Vinicius Souza, linked with Celtic, is valued at a staggering £7.8million by his Belgian side Lommel.

Fenerbahce tested the second-tier club’s resolve with a £4.3million offer which was rejected, according to Turkish media outlet Yeni Safak.

Ange Postecoglou remains keen on a deal to land the 23-year-old enforcer to take over the role of Israel international Nir Bitton, 30, who left the club last month after nine years in Glasgow.

Ismaila Soro is also likely to be on the move with Partizan Belgrade showing an interest in taking the frozen-out £2million purchase by Neil Lennon in January 2020 on a season-long loan. 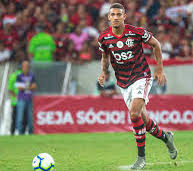 ON THE BALL…Vinicius Souza in action.

The Hoops boss has Japanese ace Yosuke Ideguchi and James McCarthy, two middle-of-the-park operators who rarely figured last season, to play alongside Callum McGregor as defensive units in the engine room, but the Greek-Australian gaffer acknowledges it is a position in his squad that urgently requires strengthening.

Souza has attracted interest across Europe with Dutch duo Ajax and PSV Eindhoven tracking him along with Serie A Bologna and Belgian cracks Club Brugge.

Postecoglou has already splashed an initial £6million on Spurs centre-back Cameron Carter-Vickers and is willing to pay £6.5million before add-ons for Benfica’s Filipe Jota.

Keeper Benji Siegrist has arrived on a free transfer after leaving Dundee United at the end of his contract and the Hoops manager will now have to weigh up the Belgian club’s valuation on Souza before making his next move.

Celtic’s record transfer outlay remains the £9million they shelled out to Paris Saint-Germain for striker Odsonne Edouard in the summer of 2018 after his initial impressive one-season loan.