Celtic Quick News on News Now
You are at:Home»Match Report»7 GOALS FROM 7 BHOYS THEN EMOTIONAL BYE BYES
By CQN Magazine on 15th May 2016 Match Report
CELTIC 7  MOTHERWELL 0
IT was the grandest of grand finales as Celtic staged a suitable fond farewell to departing manager Ronny Deila and his assistant John Collins at a sun-kissed Parkhead this afternoon.
The encounter turned into a seventh heaven in Paradise as the Hoops proved conclusively that they are the best team in Scotland as they lifted their fifth successive title.

Seven goals and seven different scorers brought the curtain down on an eventful campaign.
Deila and Collins said their goodbyes as did Emilio Izaguirre after six years at the club.
But there was a massive introduction to Jack Aitchison who became the youngster-ever Celtic player in a competitive game at the age of 16 years and 71 days. Remarkably, he made the occasion even more memorable by scoring with his FIRST touch of the ball.
A green-and-white hurricane simply swept Mark McGhee’s Motherwell aside as the title party got into swing with three goals inside the opening half-hour. 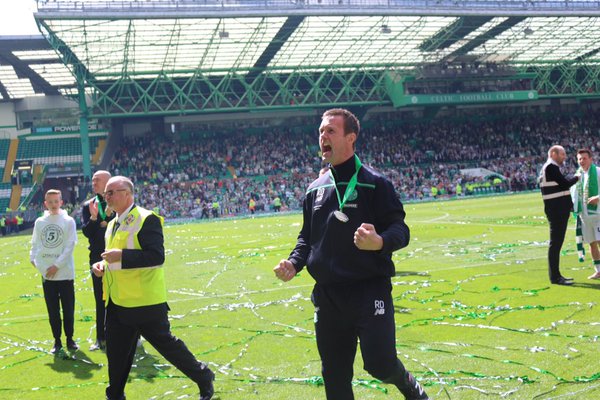 How it remained at three at the interval is another of football’s great mysteries. Ryan Christie, leading the attack in place of the suspended Leigh Griffiths, missed an absolute sitter after being presented with an open goal six yards out, Morgaro Gomis palmed away a netbound header from Mikael Lustig and goalkeeper Connor Ripley produced three stunning saves.
McGhee once saw his Aberdeen side lose nine goals to his old team in the east end of Glasgow and must have wondered if he was about to witness an x-certificate action replay.
Kieran Tierney even got on the scoresheet for the first time in his Hoops career with the goal that broke the barrier in the 21st minute.
Earlier Ripley had stopped a Christie effort with his foot and had acrobatically tipped over a scorching left-foot drive from Tom Rogic after some skilful ball juggling 25 yards out from the Aussie entertainer.
But something had to give and it did when Patrick Roberts, always lively and willing to drive at opponents, drifted in from the right to pick out Tierney on the left. 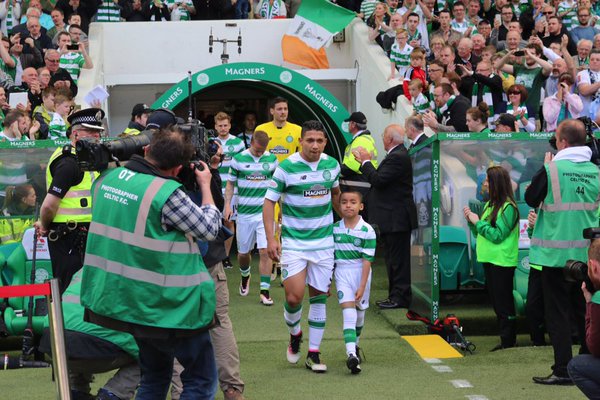 The defender shaped to go down the wing, then cut inside along the 18-yard line and drilled an exquisite low drive into the corner of the net with Ripley helpless.
Five minutes later, the fans were celebrating again when the Hoops doubled their advantage. It was another well-worked goal with Stuart Armstrong, looking positive and aggressive with some strong running from the middle of the park, played a neat one-two with Christie before lashing a shot wide of the keeper’s groping fingers.
The ball clattered against the base of the far upright, but Motherwell’s escape was short-lived with Rogic following up to fire the rebound into the unprotected net.
Two minutes after that, Ripley was fishing the ball out of the net for a third time. The on-loan Middlesbrough shotstopper lost the flight of a left-wing corner-kick from Armstrong and Lustig’s timing was perfect as he arrived at the back post to direct a header home with expertise and power.
There was no let-up, either, after the turnaround as Celtic kept the pressure on. And in the 50th minute they hammered in a fourth. 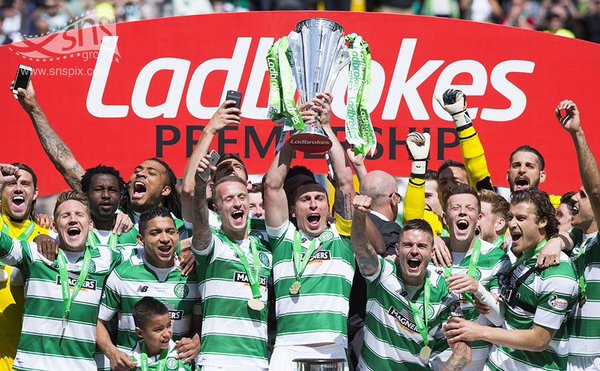 Lustig, thrusting down the right yet again, slung in a low ball that was tamed by Armstrong just inside the box and then he lashed an unstoppable effort high past the keeper.
Five minutes later, the overworked Ripley was left pawing air once more. Callum McGregor picked out Roberts and the teenager carefully guided an astute left-foot drive low in at the goalie’s exposed right-hand post.
There was a special cheer a minute afterwards as popular Honduran Izaguirre came on for the impressive Tierney.
Lustig added to the occasion by presenting the defender with the captain’s armband.
Just before the hour mark, Christie made amends for his first-half horror miss when he got his first goal for the club with a fair amount of aplomb and flourish. 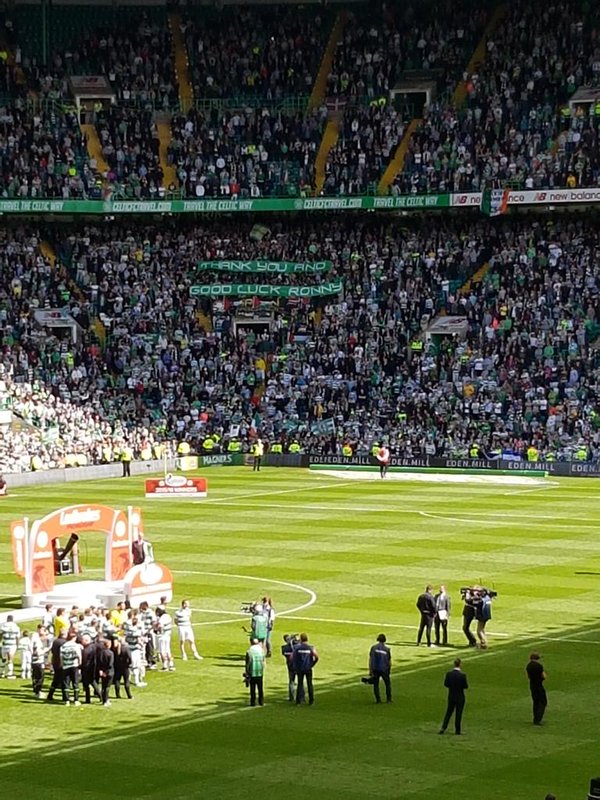 Rogic’s vision and quick feet set up the opportunity for the former Caley Thistle kid and he raced into the box before sweeping the ball beyond Ripley.
Teenager Aitchison was introduced to the cheering Celtic fans in the 75th minute – taking over the youngest player’s mantle from Mark Fotheringham who set it in 2000 – and, amazingly, the highly-rated striker netted with his first touch.
Inside two minutes of taking his bow, Armstrong and McGregor were involved in a move on the left that saw the ball break off former Celt Stephen Pearson into the path of Aitchison.
With poise and precision, the gifted attacker slotted a left-foot shot wide of the unprotected Ripley. It was an excellent finish from the player who has just agreed a new three-year deal at the club.
So, it was a fabulous farewell for Deila, Collins and Izaguirre and a tremendous welcome to Aitchison, who looks as though he could become a threat in the coming seasons.
TEAM: Gordon; Lustig, Ambrose, Sviatchenko, Tierney (sub: Izaguirre 56); McGregor, Johansen; Roberts, Rogic (sub: Aitchison 75), Armstrong (sub: Janko 84); Christie.
————————-
CQN are planning to book advertising space in newspapers in England and Switzerland later this month in relation to Resolution 12. We are crowd funding this at the moment – thank you to everyone who has contributed so far. The deadline this coming Friday and these advertisements are considerably more expensive that the Sunday Herald ad we booked last year. If you can contribute please do so HERE.
£5 from all books sold on CQNBookstore.com this week will be given to this Newspaper Statement fund.