Celtic Quick News on News Now
You are at:Home»Latest News»8 KEY GAMES ON WAY TO 8
By CQN Magazine on 5th May 2019 Latest News

CELTIC clinched their eighth successive title in their 3-0 tromp against Aberdeen at Pittodrie yesterday.

Here are eight key games that swept the Hoops to their 50th championship.

MOUSSA Who? That was the question after Olivier Ntcham scored the only goal a couple of days after his French team-mate Moussa Dembele had quit in a £19.8million switch for Lyon.

The former Manchester City midfielder struck in the 62nd minute in a contest where the Hoops hit the woodwork FOUR times through James Forrest, Mikael Lustig, Leigh Griffiths and Ntcham.

Brendan Rodgers enjoyed his tenth win over the Ibrox side in 12 games, the other two ending in draws.

Tom Rogic, Odsonne Edouard and Forrest combined to set up Ntcham for a first-time drive that flew low past Allan McGregor from 10 yards.

It gave Rodgers his first triumph over his former Liverpool skipper Steven Gerrard.

THE WINNER…Olivier Ntcham slams the ball behind Allan McGregor to give the Hoops triumph in the Glasgow derby.

SCOTT SINCLAIR showed marvellous improvisational skills to lead Celtic to a well-deserved triumph over the Dons at Parkhead.

The Englishman, who was introduced as a first-half substitute for the injured Odsonne Edouard, snatched the winner with a wonderful back-heel in the 63rd minute.

Odsonne Edouard, bought in the summer for a club record £10m from Paris Saint-Germain, displayed some fabulous skill in the 26th minute, but his curling 30-yard effort smacked against the crossbar with keeper Joe Lewis stranded.

The Frenchman was injured in a collision with Scott McKenna and was replaced by matchwinner Sinclair in the 42nd minute.

Derek McInnes’ side showed flashes of danger in breakaways, but the champions held out. 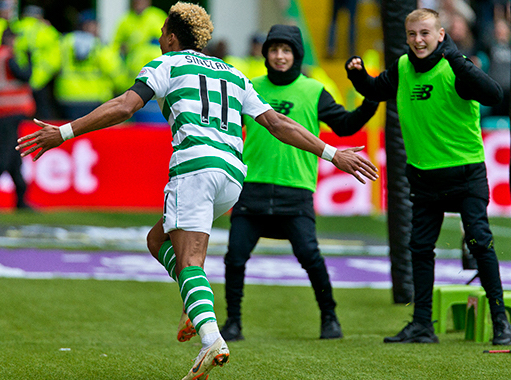 PARADISE…Scott Sinclair shares the joy after his cheeky back-heeler against Aberdeen.

BREATHTAKING! The champions demoralised Craig Levein’s title pretenders from Edinburgh in a pulverising performance at Parkhead.

Celtic completed a back-to-back glorious double following their 3-0 triumph in the League Cup semi-final win at Murrayfield the previous week.

This time around in the east end of Glasgow, the Hoops went two better as Odsonne Edouard (2), Filip Benkovic, James Forrest and Ryan Christie, with a late penalty-kick, got on the scoresheet as the title kings’ goalscoring in their past five domestic games rocketed to a remarkable 23.

The Tynecastle outfit have shed eight in two games to add to the six against St Johnstone, four versus Hibs and five at Dundee.

It’s awesome stuff as Celtic get back into their stride with another treble on the radar. 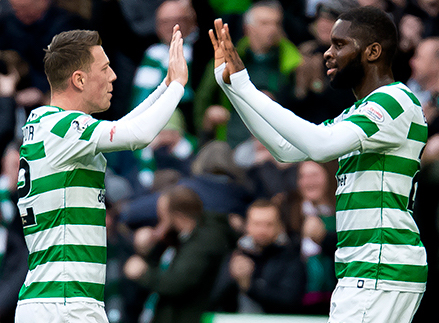 HIGH FIVES…Callum McGregor and Odsonne Edouard celebrate one of the Frenchman’s two strikes against Hearts.

SCOTT SINCLAIR was the Celtic hero with a scintillating hat-trick in the champions’ hard-fought triumph over the Dons at Pittodrie on Boxing Day.

The Hoops battled all the way to their third successive victory over the Dons and the three points that keep them on top of the Premiership.

Sinclair netted the opener in the sixth minute, but Derek McInnes’ men levelled with a Stevie May penalty-kick. Substitute Odsonne Edouard, a replacement for Callum McGregor, combined with James Forrest to set up the English attacker for his second in the 76th minute.

Moments later, it was all-square when ref Willie Collum awarded the Dons a second spot-kick and this time Sam Cosgrove scored. But Edouard put the Hoops ahead again in the 86th minute and two minutes later Sinclair completed his trio. 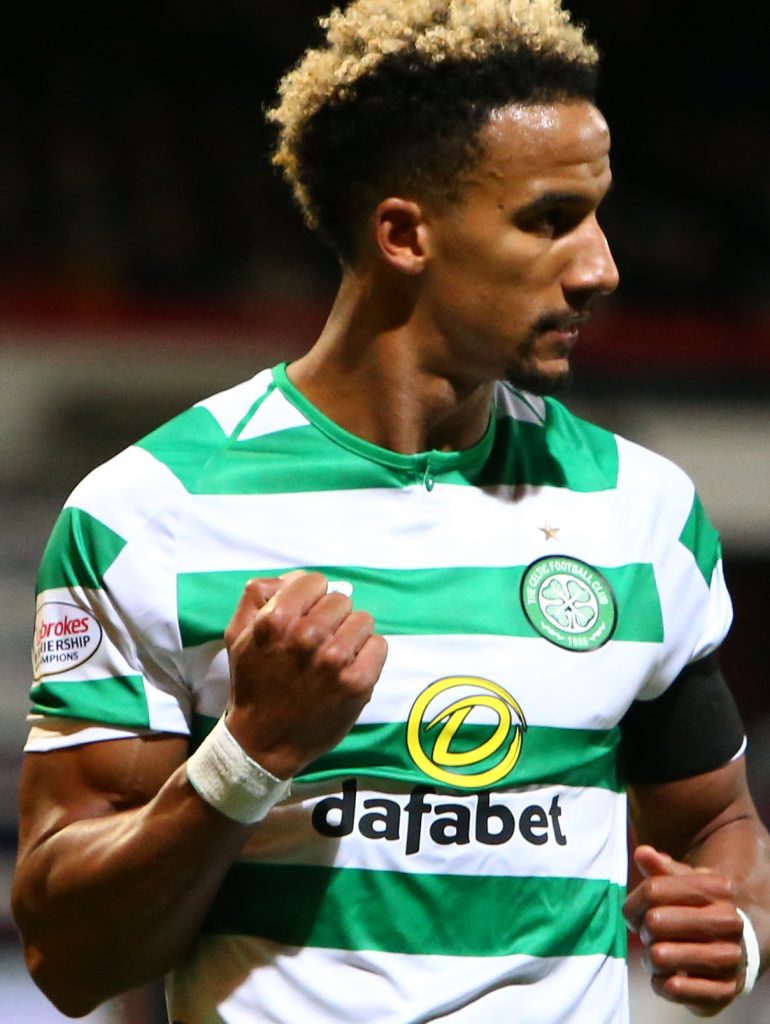 CELTIC moved eight points clear at the top in the most dramatic of circumstances at Rugby Park.

It was heading for a scoreless stalemate when substitutes Timothy Weah and Vakoun Issouf Bayo combined to win a corner-kick in the 89th minute. Callum McGregor’s right-wing effort dropped to Scott Brown who fired in the winner.

The skipper went behind the goal to celebrate with the travelling fans and copped a second yellow card from referee Bobby Madden who had earlier sent off Killie defender Kirk Broadfoot for a high challenge on the Hoops captain.

Until Brown struck, it looked as though the game was ebbing away from the champions.

Now they are only nine successive victories away from their eighth consecutive Premiership crown. 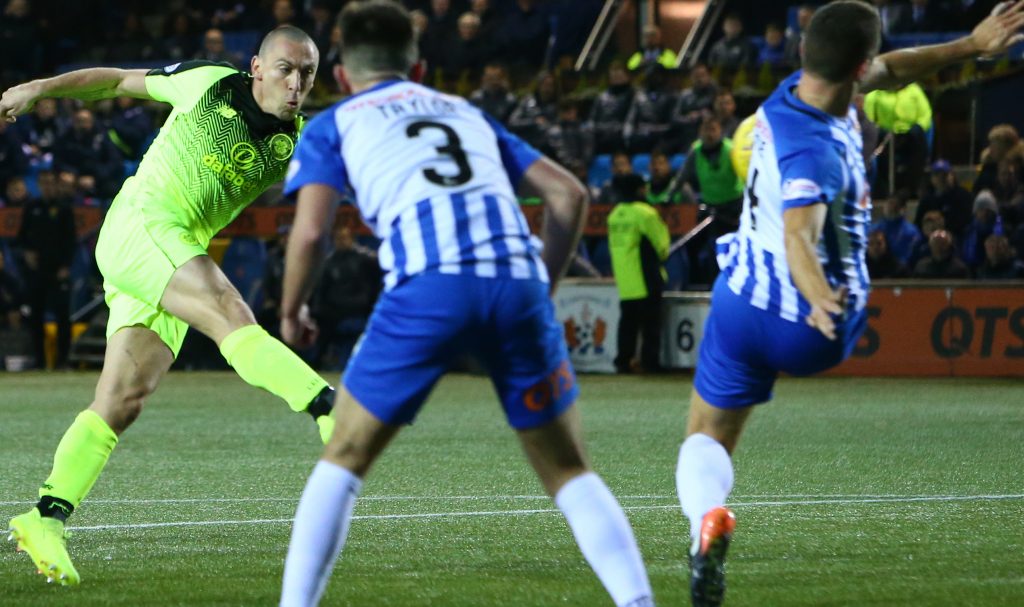 WALLOP…Scott Brown thumps in the dramatic late winner against Killie.

DEEP into stoppage time, Neil Lennon, on his second homecoming, must have thought the team were about to surrender two points to 10-man Hearts at Tynecastle.

The champions had laid siege on the home goal, but there was no sign of a breakthrough until two minutes beyond the regulation 90 when Scott Brown lofted in a deep cross.

James Forrest had scored the opener in the 36th minute and the home outfit then had defender Jamie Brandon red-carded eight minutes later after a foul on Jeremy Toljan. Oliver Bozanic equalised with a penalty-kick shortly after the turnaround before Edouard struck the late clincher. 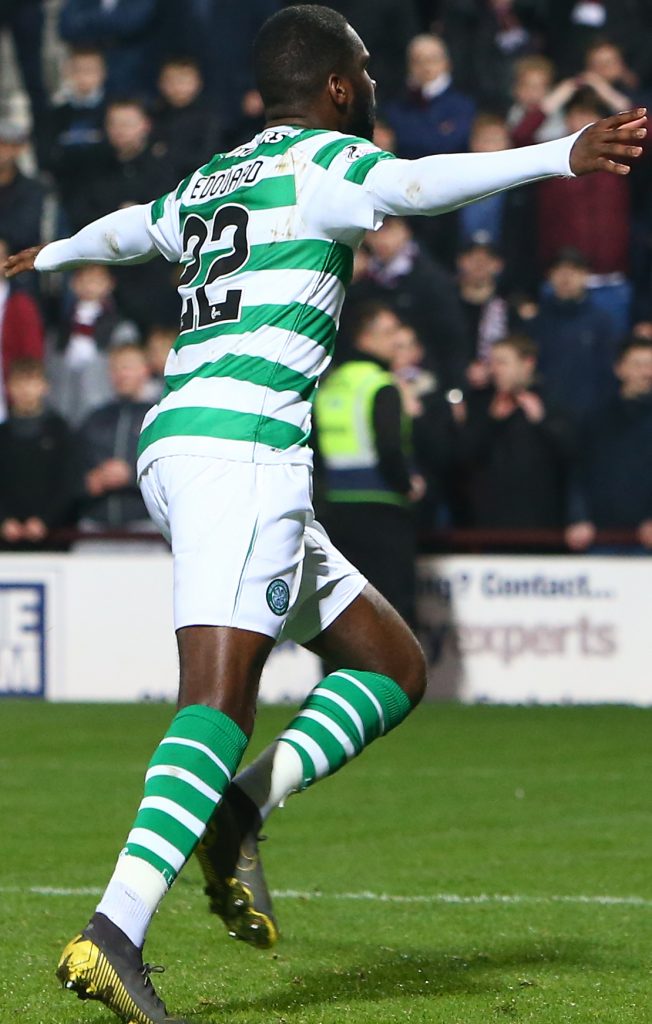 STOPPAGE-TIME SUPERSTAR…Odsonne Edouard races away after his late points-clincher at Tynecastle.

SLICK goals from Odsonne Edouard and James Forrest swept Celtic THIRTEEN points ahead at the top of the table.

It was an explosive encounter that ended in chaos and saw Alfredo Morelos red-carded for an elbow in the face of Scott Brown, Ryan Kent punch the Hoops skipper in the immediate aftermath of the second goal and Andy Halliday pick up a second yellow card AFTER the game.

Celtic, too, ended the game with 10 men when Dedryck Boyata limped off in the 74th minute after Neil Lennon had already used all three substitutes in Scott Sinclair, Tom Rogic and Jeremy Toljan.

The home side relied on an 86th-minute strike from Forrest following the 63rd-minute leveller from Kent.

Edouard opened the scoring in the 27th minute when he raced 50 yards after a first-time pass from Forrest before thumping home. 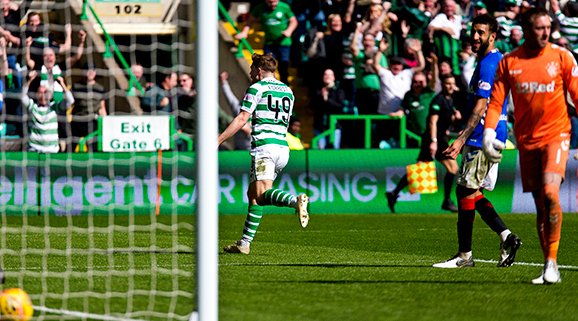 WONDER BHOY…James Forrest accepts the applause of the fans after his winner against the Ibrox side.

SOME things are written in the stars. Jozo Simunovic, the man wearing Billy McNeill’s No.5, headed in the winner with 67 minutes showing on the Parkhead scoreboard.

The Croatian centre-half had scored only two goals in four years until he popped up with the winner on this highly-charged occasion.

The Hoops were toiling for a breakthrough goal and had passed four hours without a league strike following scoreless draws with Livingston and Hibs when they were awarded a corner-kick on the right.

It was blocked and Tom Rogic worked it back to Callum McGregor. This time the midfielder arced a cross to the back post and Simunovic took off on an almighty leap to get his head to the ball to send an effort zipping low past the diving Daniel Bachmann at his right-hand post. 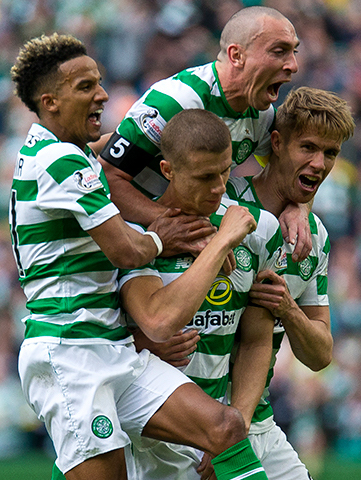 PRIZE GUYS…Jozo Simunovic is congratulated by Scott Sinclair, Scott Brown and Kristoffer Ajer after his headed goal against Kilmarnock.