CONOR HAZARD, who impressed on his Celtic debut in the 3-2 win over Lille during the week, WILL take his Premiership bow against Kilmarnock at Parkhead tomorrow afternoon.

Boss Neil Lennon is not showing his hand at the moment before the vital encounter against a team that took two points off the champions at Rugby Park in only the second game of the league campaign.

Hazard, 22, who is already a full Northern Ireland international, took over the No.1 position against the high-flying French side while £4.5million Vasilis Barkas and Scott Bain remained on the substitutes’ bench.

The debutant had no chance with the two goals he conceded and made a good save near the end when he spread his frame to knock away an effort from Isaac Lihadji that would have brought the game back to 3-3. 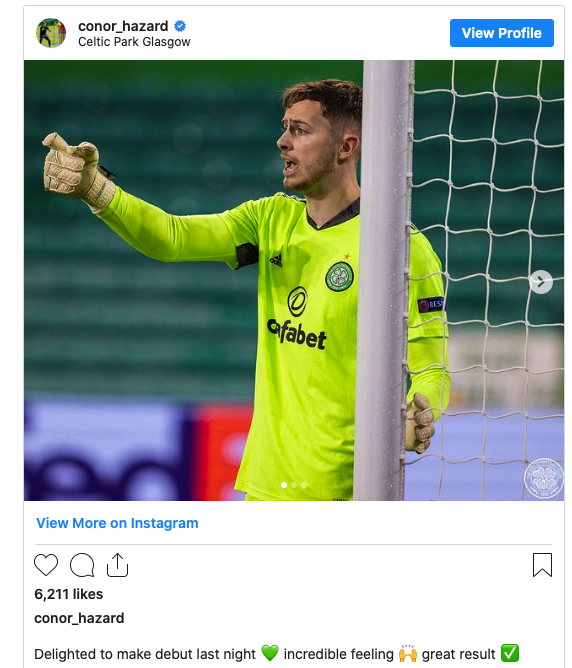 He also showed a good pair of hands as he grabbed a dangerous low cross plus his distribution from hand or foot was also superior to that from Barkas and Bain in this campaign.

The towering netminder created a stir on Instagram and was showered with praise with former team-mate Scott Sinclair, who joined Preston in January, among the first to salute the shotstopper.

And Leicester City central defender Filip Benkovic, who impressed in his season-long loan in 2018/19, added: “Hazoo so happy for you, congrats!!!!”

FC Midtjylland captain and ex-Hoops centre-back Erik Sviatchenko said: “Well done my friend!”, while a former member of the Parkhead goalkeeping contingent also offered his support, with Dorus De Vries adding: “Congratulations pal”.Although Lennon is not making any announcements about his starting eleven against the Ayrshire side, CQN will confidently predict Hazard WILL be in goal for this game.