Celtic Quick News on News Now
You are at:Home»Latest News»‘A FEW PENNIES AND SOME SWEETIES’: THE DEAL FOR ONE OF CELTIC’S GREATEST-EVER KEEPERS
By CQN Magazine on 25th August 2021 Latest News

JOE HART appears to have solved the No.1 problem that haunted Celtic last season with Vasilis Barkas, a £4.5million arrival from AEK Athens as replacement for Fraser Forster, proving to be a colossal letdown.

Scott Bain and Conor Hazard were also tried in an attempt to solve the worrying situation, but they, too, failed to convince.

Last month, Barkas made a high-profile howler against FC Midtjylland that went a long way to the Hoops losing out on the opportunity to make an impact in the Champions League which led to the Greek being axed and Bain reinstated.

Ange Postecoglou has now landed 34-year-old former England international Hart on a £1million switch from Spurs and already it looks like being money well spent. 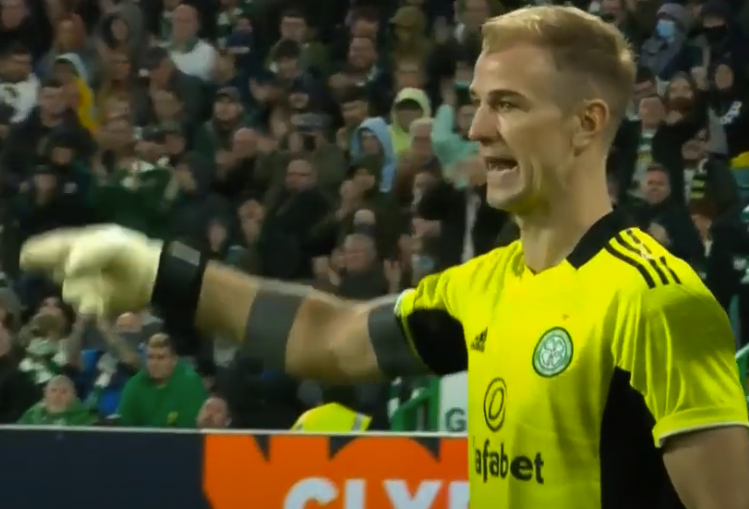 POINTING THE WAY…Joe Hart has been an instant success at Celtic.

The deal is evoking memories of another era when one of the most reliable shotstoppers the club have ever possessed cost “a few pennies and some sweeties”, as Ronnie Simpson often joked after his extraordinary move at the age of 33 from Hibs to Celtic in September 1964 as deputy to John Fallon.

His rise to the No.1 position was stuff of fairytales. Simpson, whose father Jimmy played for Rangers, underlined the importance of having a reliable last line of defence.

He was the man in charge when Celtic won the league title in 1966 to kick off the glorious nine-in-a-row sequence.

The goalkeeper had been close to joining Berwick Rangers in the old Second Division before Sean Fallon, then assistant manager to Jimmy McGrory at Parkhead, brought him to Glasgow from the Edinburgh club.

Celtic needed cover with Frank Haffey, the keeper who once infamously lost nine goals to England at Wembley in 1961, heading for Swindon Town in a £8,000 switch.

That left the club with only Fallon as an experienced custodian and Simpson was brought in as back-up.

Didn’t quite work out that way, of course, and the so-consistent shotstopper won his way into the line-up to lift four league titles, one Scottish Cup and three League Cups and a European Cup before being forced to retire through injury at the age of 39.

It was the evergreen Simpson who was lifted shoulder high by his jubilant team-mates after Celtic beat Motherwell 1-0 at Fir Park to claim their first title in 12 years and the story is one of the fabulous tales recalled by author Alex Gordon in his latest Celtic book, ’50 Flags Plus One’.

The shotstopper, who claimed English FA Cup winners’ medals with Newcastle United in 1952 and 55 in a fairy-tale career, went into the final game of the 1965/66 campaign knowing only  spectacular collapse would prevent them from winning their first title since 1954 when Jock Stein and Neil Mochan were players.

The situation was fairly clear-cut. Rangers had played their last match of the campaign the previous midweek in a 4-0 triumph over Clyde at Ibrox. It had been their seventh successive win as they tried audaciously to catch their fiercest rivals. They had racked up fifty-five points, the same as Celtic who would bring down the curtain with a confrontation against Motherwell at Fir Park on May 7.

Jock Stein’s men were already as good as champions, but, as Bertie Auld recalled: “No-one mentioned it in front of the manager. He was taking absolutely nothing for granted. It was goal average back then and we had scored 105 goals and conceded 30 against Rangers’ 91 for and 29 against. 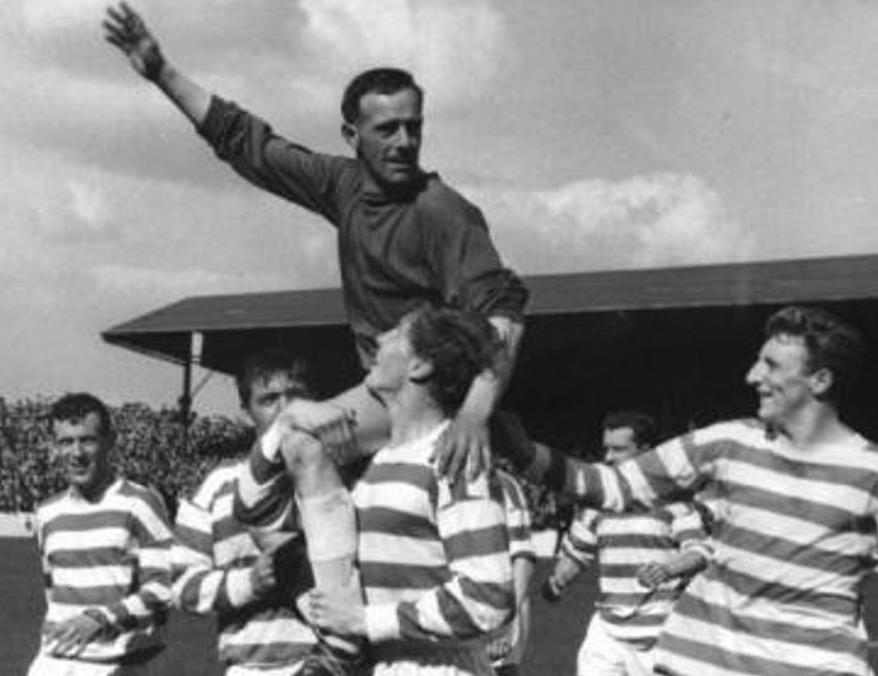 OUR HERO…Ronnie Simpson is lifted shoulder high by Bobby Murdoch and Billy McNeill after the 1-0 win at Mothewell in May 1966 – the first flag triumph for the Hoops in 12 years.

“We would have had to lose 4-0 or something like that. Jock reminded us all week during the countdown to the game: ‘We’ll be champions when it is mathematically impossible for us to be overtaken. Then, and only then, will we accept we have won the title.’ He meant it, too.”

On the day of the match, there wasn’t the merest hint of a sensation of seismic proportions in North Lanarkshire, not far from where Stein had taken charge of the team for the first time on March 10 1965 in 6-0 rout over Airdrie at Broomfield.

Bobby Lennox struck with a minute to go of an encounter that had been transformed into a gambolling escapade almost from the kick-off. Celtic took control, but were clearly wary of counter-attacks. Jim Craig set up the only goal with a burst down the right and a sweet cross and Lennox diverted the ball into the net from two yards.

“Just my range,” was the oft-repeated observation from the man known as Buzzbomb for his electrifying acceleration.

The agonising trek through football’s wasteland had come to a satisfactory conclusion. The horrible pain of repetitive failure vanished in the glorious sunshine at Motherwell’s ground.

* ‘CELTIC: 50 Flags Plus One’ celebrates the club’s remarkable fifty-one league championships in their glorious history. To order a copy – and get a FREE book, ‘Seville: The Celtic Movement’ – please click HERE.