KYOGO FURUHASHI scored his first goal of 2022 when he rose to Filipe Jota’s astute right-wing cross to thump a 12th-minute header low past Ross County keeper Ross Laidlaw in the vital 2-0 triumph in Dingwall yesterday.

Amazingly, it was the Japanese talisman’s first strike since his exquisite lob over Hibs netminder Matt Macey to propel Celtic towards their Premier Sports League Cup Final victory at Hampden on December 19.

His appearance in the Highlands was the pacy forward’s first start since Boxing Day when he was forced to limp off after only seven minutes in the 3-1 win over St Johnstone in Perth. 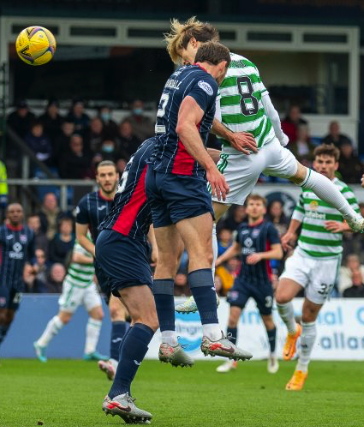 HEAD BHOY…Kyogo Furuhashi hovers above the Ross County defender to bullet in the opening goal in Dingwall.

And Kyogo looked eager to bolster his goal tally against Malky Mackay’s Highlanders who had been unbeaten in the league at their Global Energy Stadium since the last time the Hoops visited four days ahead of the silverware success over the Easter Road club at the national stadium six days before Christmas.

The returning frontman, who had two outings as a substitute before taking his place in the line-up against County, looks like he is going to bring down the curtain on his debut campaign with a flourish as he intends to add to his 17-goal tally.

Ange Postecoglou knew what he was getting when he splashed £4.6million to bring the 27-year-old international striker from J-League outfit Vissel Kobe in July as one of the first signings in his monumental Hoops revamp.

Is it any wonder the Greek-Australian gaffer beams as he calls his acquisition “a hell of a player” while he prepares for the four-game run-in that is heading towards an extraordinary Premiership title success?

NOT THIS TIME, KYOGO…the Celtic striker sees his low shot diverted past the post by keeper Ross Laidlaw. 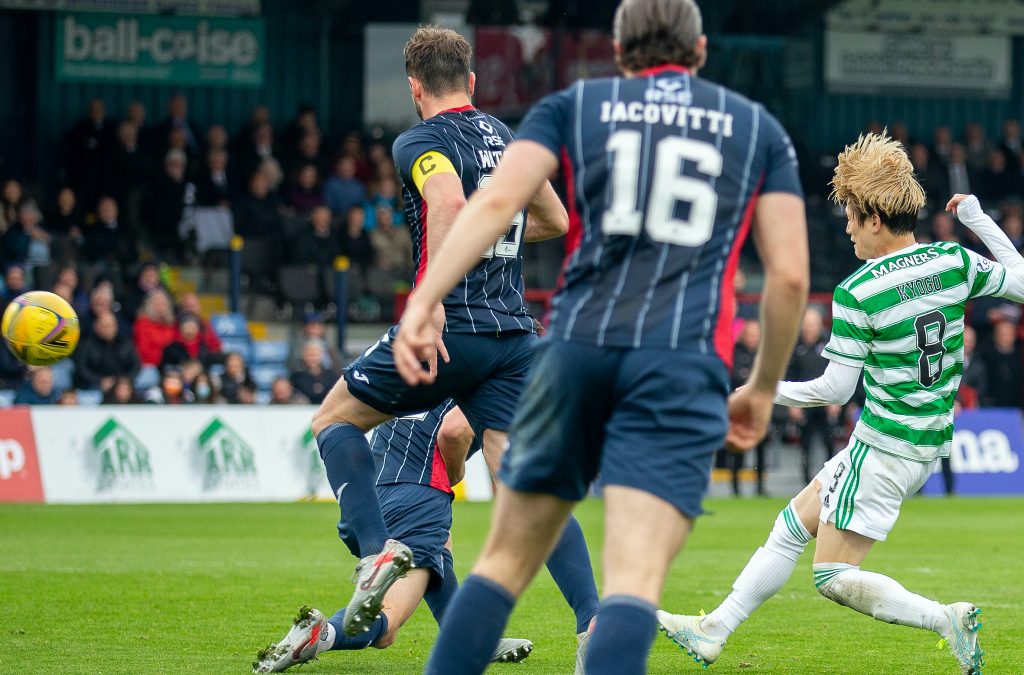 OVER THE TOP…Kyogo Furuhashi’s right-foot drive is just too high.

Kyogo, who was replaced in the 64th minute to make way for 13-goal Giorgos Giakoumakis in Dingwall, will have a crucial role to play against Giovanni van Bronckhorst’s Ibrox visitors on Sunday, Hearts at the same venue the following Saturday, Dundee United at Tannadice four days later and Motherwell when the championship trophy will almost certainly be handed to captain Callum McGregor at Parkhead when the curtain comes down on a truly stupendous season on May 14.

Reflecting on the exploits of Kyogo, Postecoglou smiled and told Celtic TV: “He’s a hell of a player and most teams would miss a player like him.

“And he’s worked hard to get back, so it was great for him to get a start. He’s still not super-sharp, if he was he would probably have had three.

“He has that little bit of magic about him and, hopefully, that goal is a reward for him working hard to get back the team.” 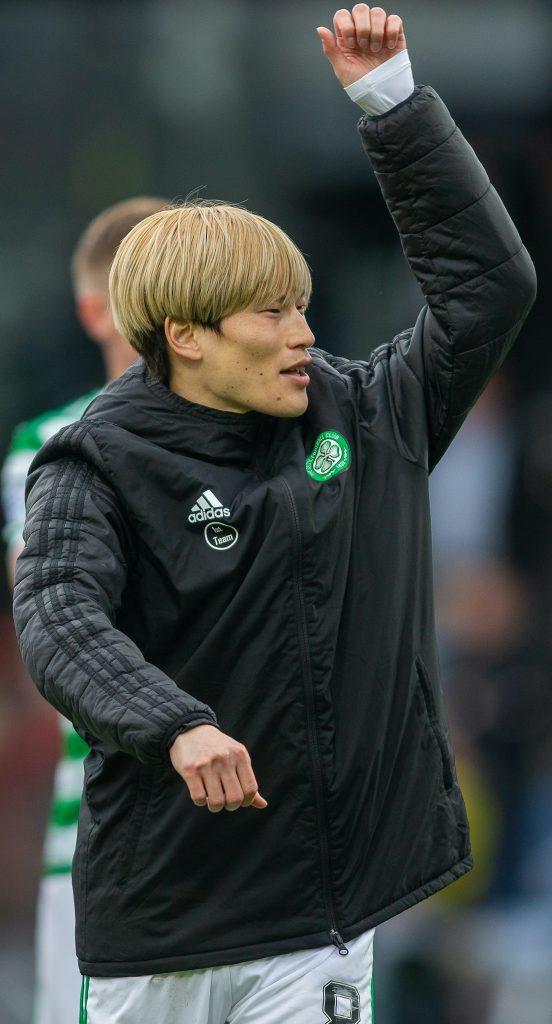 HAPPY DAZE…Kyogo Furuhashi celebrates after the win in Dingwall.

Kyogo also saw an effort clip the crossbar and another ‘goal’ incorrectly ruled out when he was played onside by defender Alex Lacovetti as he tucked away a clever pass from Matt O’Riley. All that was within the first half-hour!

He displayed some understandable rust when he had a close-range drive deflected for a corner-kick by the keeper after Laidlaw had fumbled a teasing low shot from O’Riley and the exhilarating attacker also blazed over after working a lightning one-two with Daizen Maeda.

Is it any wonder he was short of puff in the second-half?

The bad news for the four upcoming opponents is that Kyogo is clearly out to make up for lost time after his 17-game injury lay-off.

As the manager says, he is “a hell of a player”.