Clinging onto a lead that August night in Israel guaranteed this would be a record turnover season for Celtic, instead of what may have been a loss. As well as the Uefa dividend itself, we sell more tickets for other games in seasons we participate in the Champions League. We also sell more merchandise, premium packages and hot dogs at league games.

I was very surprised when news of the Dafabet and Magners deals filtered through last spring. Sentiment at the club at that time was on its bum, but these contracts brought a significant increase in income (in the case of Dafabet) and great income for a new property (in the case of Magners). Worthy mention also to Intelligent Car Leasing, for the boost they have given to the Foundation.

The ready-reckoner revealed that the value of these contracts roughly equated to one season’s Champions League money. It was a huge result, which laid a critical foundation for the steps the club took to secure a manager in May.

We were guaranteed more money, which gave us more confidence, which fuelled the move to secure a top manager. The small snippets of history are often missed, but no less fascinating.

Brendan Rodgers arrived like a superstar and has delivered on that promise. From the moment touched down in Scotland he sold season tickets, the club united behind a talented manager who is here determined to achieve great things. 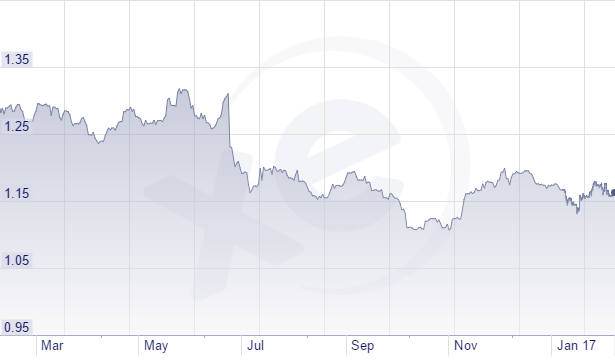 No club in the world is more dependent on foreign exchange rates than Celtic (euro/GBP graph above). The economically illiterate (don’t start me) who voted for Brexit have caused an untold net harm to the world, but as sterling depreciated against the euro, the value of Celtic’s euro income from Uefa in GBPs went through the roof.

We are a football club playing in Scotland who earn euros and sterling in almost equal measure. Bad UK economic news may harm our sterling income but will boost our euro income. No other club operates a scenario like this.

Well done to all concerned, from Brendan and the players, to the tens of thousands who bought tickets and mechanise, and the commercial team and board.