CELTIC’S FANS MEMORIES OF THE THINGS THEY’VE SEEN ARE OFTEN FOUND IN THE MEMENTOS THEY KEEP FROM THOSE OCCASIONS. HERE, BOURNESOUPRECIPE TALKS ABOUT HOW ONE PARTICULAR MEMENTO BECAME SIGNIFICANT …

It was deep winter, the CQN Blog was fractious, and Celtic were worse, second season syndrome for supporters players and coaching staff was apparent, all round. We’d just gotten over being three down to Kilmarnock at half time, but never was the eventual draw as close, to feeling like a defeat.

Opinions were plentiful, things looked bleak but as always with Celtic, the club dug deep, and the yattering on CQN continued unabated until we racked up, a win or two. Looking for stuff, to post on the Blog, I came across some pictures of old Celtic Memorabilia which transported me back to the sixties, and things you owned and lost, or had given away.

Amongst the items was the ole Celtic Scarf that adorned a generation or two, of Celtic Fans a scarf (you know the one). My big brother’s hand me down was ironed and cherished for home games, where did they go? They must have been everywhere, all over Scotland and the known world at some point in time. Celtic didn’t do multiple away tops, second strips every year, we wore the Hoops, sponsorship, marketing or even money making didn’t exist. Then one year they brought out “THE ALL GREEN STRIP”

I’ve never forgotten her reply either which was, “What do you want me to do genuflect?” days, not even weeks later the news was round the village like wildfire Hugh McColgan’s got the all green strip as well, and it wasn’t even his birthday. My Dad said, “Aye, but son his mother works” – Whatever that meant? 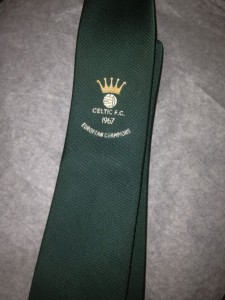 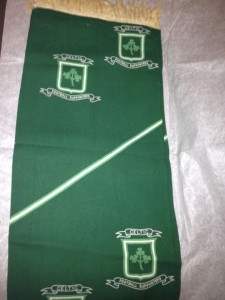 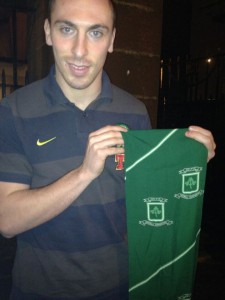 I was never a paperboy either, so my all green strip eventually turned up one Christmas morning, and I’ll never forget the feeling of those silky green shorts with a home-made number 4, rubbing on my thigh whilst trying to walk unsuccessfully like Bobby Murdoch.

We were mid nine in a row played village soccer 365 days a year Celtic supporters and Rangers supporters all mixed, no angst, except one day at kick off we’d always chose a side to represent when I said to Rangers man Paul Pringle “We’ll go The Champions, and in a flash he said O.K. we’ll go Celtic.”

When we won the Big Cup at full time, there were sacred shawls by the thousand all over Glasgow, mine was on a victory parade round the village tied to the handlebars of my bike and back in those days such was the enormity of our achievement, I’d swear even some Rangers supporters joined in. Alan Stokes (not of the Celtic faith), was rattling my back door within minutes of the final whistle, he knew somebody whose team had just become Champions of Europe, and he wanted in on the action, with his bike amid the rest of the victory parade of bhoys, that circumnavigated the village till after dark in May 1967.

Anyway a sacred shawl was tucked away neatly pressed in tissue in Maryhill and now Donegal’s finest esteemed CQN’r Thomthethim’s drawer. When he read CQN, and how I commented on missing mine he decided it was better out than in, so when he checked what the shawl was going to used for, which was keeping my neck warm outside the gazebo at Celtic Park, he airmailed it straight back to Glasgow.

We stared at the parcel then touched the cotton, and marvelled at the wee shamrocks and the feel of the sixties, revelled in this piece of retro Celtic chic, I recounted the feel and texture the times I’d held it above my head at the back of the Celtic end on match days, when it wasn’t tied to my bike.

So here was one just like it, back again, off it went to Parkhead and lo and behold Scott Brown was impressed if bemused, by the tale, but he was honoured to give the shawl, the Broonie he touched the shawl, and the shawl touched him, and touched us all, thanks to thomthethim.