EIGHT down and two to go as the Celtic fans partied at Pittodrie this afternoon.

A first-half goal from Mikael Lustig pointed the champions in the direction of their eighth successive title – and the FIFTIETH in their history.

Jozo Simunovic and Odsonne Edouard added two others after the turnaround to make certain of the flag with two games still to play – and the magical 10 consecutive crowns edging a little closer.

The deadlock was broken in the 40th minute with a wonderful diving header from Lustig from an extraordinary delivery from Callum McGregor.

The Hoops midfielder applied some careful precision after a w throw-in on the left and notice the Swedish defender sneaking in at the back post behind Stevie May.

The angled cross was breathtaking in its accuracy and Lustig took off Superman-style to get his head to the ball and flash it beyond the helpless Joe Lewis. It was the goal Celtic needed to settle as the Dons were proving to be extremely dangerous opponents. 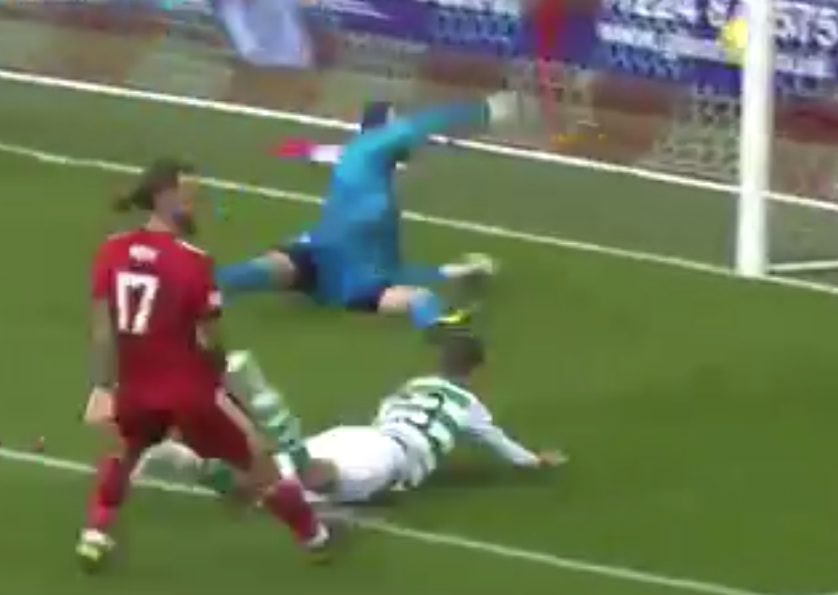 SWEDE DREAMS…Mikael Lustig dives flat out to send a header zipping past Joe Lewis for the opening goal.

In fact, James Wilson could – and probably should – have scored twice in a nervy first-half from the visitors where the ball was surrendered too easily while it looked as though the attacking players were being outmuscled by a rugged rearguard.

In the 17th minute, the on-loan Manchester United forward found himself with far too much space as Greg Stewart flighted over a cross from the left.

Wilson attempted an acrobatic half-volley and only succeeded in hitting the ball into the turf before it bounced up and over Scott Bain before it clipped the bar on its way over.

In the 32nd minute, he touched woodwork again after being presented with an open goal. Odsonne Edouard’s misplaced pass was seized upon as the Dons raced into a counter-attack with centre-back Scott McKenna carrying the ball 60 yards before curling in an inviting cross.

Sam Cosgrove met it at the back post, but his low shot was bundled away by the sprawling Bain.

It fell perfectly for Wilson, but he rushed his effort and his 10-yard drive kissed the outside of the right-hand post and flew to safety. 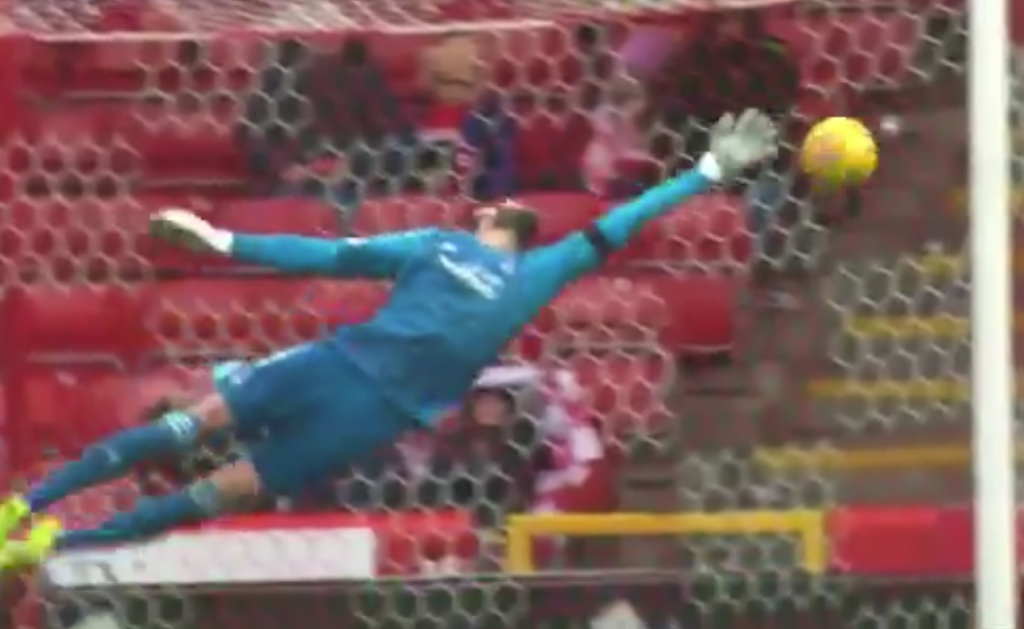 S-T-R-E-T-C-H…but Joe Lewis has no chance as Jozo Simunovic’s header soars into the net for the second goal. 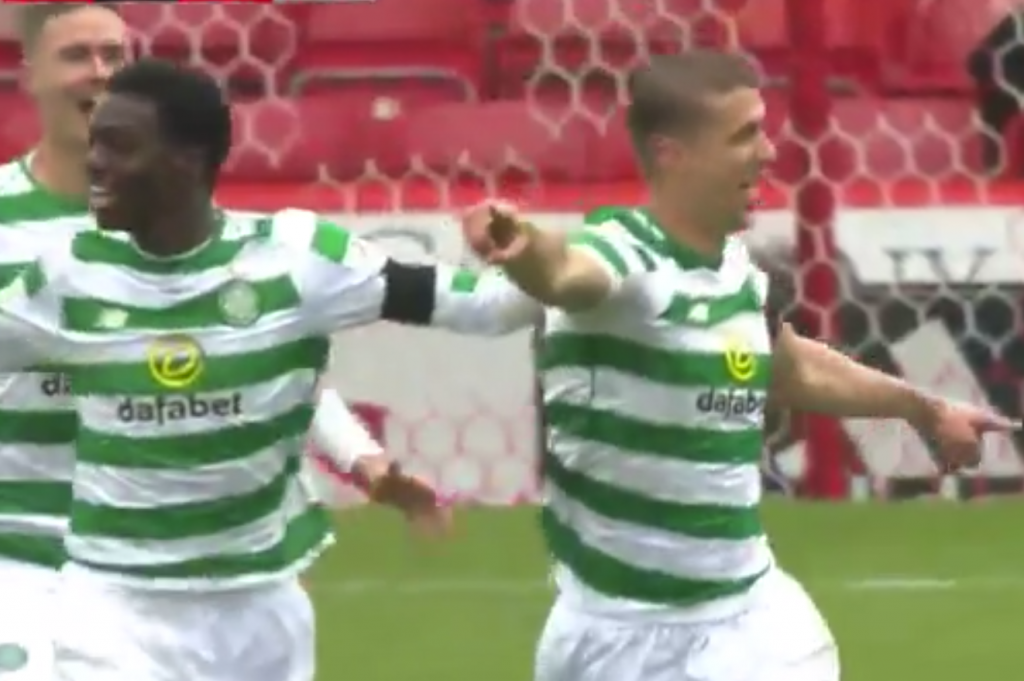 CHEERS…Timothy Weah congratulates Simunovic with Mikael Lustig about to join in. 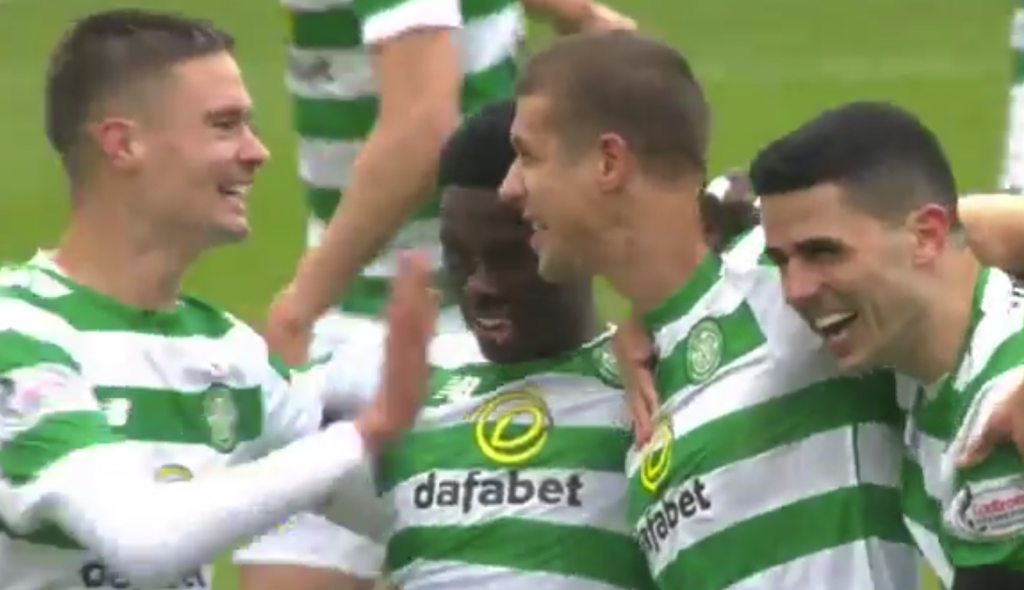 Before Lustig’s breakthrough effort, the Hoops’ best chance fell to Edouard when Kristoffer Ajer found him with an accurate long ball out of defence.

It looked as though the Frenchman must score as he bore down on Lewis with Shay Logan trailing in his wake. However, the right-back got the merest touch to knock the striker slightly out of his stride and his parting shot was too close to the outrushing keeper and the chance was lost.

Edouard was also involved in the 36th minute when he neatly set up a shooting chance for James Forrest on the edge of the box, but his deliberate shot was just wide of Lewis’ right-hand upright.

It wasn’t exactly classic Celtic, but Timothy Weah was lively on both flanks and justified his starting position ahead of Scott Sinclair.

In the 53rd minute, Simunovic rose supremely to a McGregor left-wing corner-kick and sent a 12-yard header soaring past the diving Lewis for the second goal.

It came from yet another dangerous set-play from the Scotland international and was awarded after Lewis had made a swift reaction save from a close-range shot from Edouard.

Tierney came off shortly afterwards to no-one’s surprise with the full-back heading for a double hernia operation in the summer.

Jonny Hayes came on in his place and did well, despite a savage tackle from Cosgrove that earned the Dons frontman a yellow card. It could so easily have been red.

Weah, who had put in a good shift, was replaced by Oliver Burke in the 73rd minute and Sinclair came on for the limping Lustig in stoppage time.

It was all over before Tom Rogic, looking more like his old self, raced away with the ball at his feet and then setting up Edouard on the edge of the box.

He took a touch, steadied himself and completely bamboozled Lewis with a low drive into the right-hand corner of the net.

Now it’s all down to Hampden on May 25 and a date with destiny against Hearts in the Scottish Cup Final.

The coveted and historic treble treble is now only 90 minutes away.