LEIGH GRIFFITHS was the stoppage-time saviour to prevent Celtic’s fifth Premiership league defeat of the season at Pittodrie this evening.

The Hoops were chasing the game in the fading moments when it looked as though Aberdeen would hold on to their first-half goal from Lewis Ferguson.

However, Mohamed Elyounoussi managed to pick out Griffiths, who had replaced the misfiring Odsonne Edouard, stealing in at the far post.

The Norwegian international’s cute right-footed cross from the left swept over the Dons rearguard and the frontman materialised to get a head to the ball to nod it almost nonchalantly past the stranded Garry Woods.

It was what the Parkhead men deserved as they dominated this encounter for huge chunks of the game, but looked as though they were going to be thwarted until Griffiths came on the scene three minutes into stoppage time.

THE EQUALISER…Leigh Griffiths nods the ball past Dons keeper Garry Woods to grab a well-deserved point.

Celtic were denied what looked a legitimate equalising goal just before the interval in a shocking decision from the assistant referee when he waved Edouard offside when he knocked in a pass from Elyounoussi. It was tight, but the Celt looked just behind the last Dons defender.

It looked as though the visitors had received a reward from fighting back from yet another set-piece setback after they allowed the Dons to take the lead.

In the first-half, Edouard had passed up an array of opportunities before hitting the net only to be robbed by an over-zealous match official.

The Hoops showed their intent in the 11th minute when David Turnbull swirled in a right-footed free-kick from 25 yards, but keeper Garry Woods anticipated the movement and direction and got across his line to push the ball to safety. The Dons had also shown their menace with a Ferguson header that was clawed away by Scott Bain.

In the 17th minute, the visitors’ appalling record of failing to deal with a set-play cost them yet another goal. Andy Considine outjumped Stephen Welsh to a right-wing corner-kick and his header was forced home by Ferguson at the far post.

It’s been monotonous watching a defence so inept at facing these deadball efforts and conceding goals at an alarming rate during a wretched season laced with x-certificate and costly lapses. 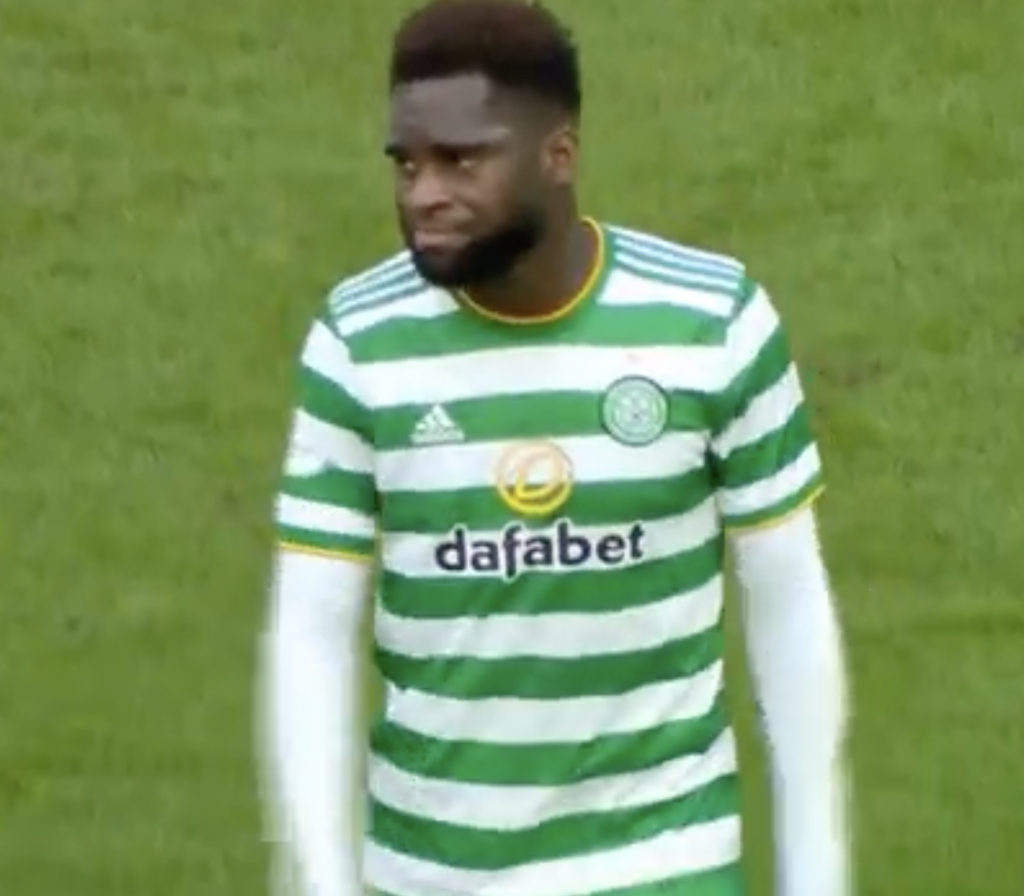 OFF TARGET…Odsonne Edouard passed up a few opportunities.

Celtic tried to come straight back into the contest and three minutes later, Jonjoe Kenny picked out Edouard as he raced into the box, but his tame effort was wide of the post.

In the 22nd minute, the Frenchman, who was culpable of a couple of dreadful misses, including a squandered penalty-kick, in the Scottish Cup exit at Ibrox on Sunday, should have equalised after being picked out by a deft clipped pas from Turnbull. Unhappily, he hit the ball straight at the keeper and the chance was gone.

Four minutes later, the returning Nir Bitton blundered to tee up a perfect shooting chance for a grateful Ferguson inside the box. Thankfully, Scott Bain’s concentration was a bit more acute than that of his defender and he got down smartly to push the ball away.

It didn’t get much better for Bitton moments later when he wastefully fired a pass straight out of play when he had options to find a team-mate.

Edouard blew another great opportunity after being sent clear on the left by the hard-working Turnbull. He dragged the ball inside to his right, but the finishing effort lacked conviction and was smuggled away by Woods. Ryan Christie’s follow-up shot from the rebound was deflected over the bar by his former team-mate Jonny Hayes. 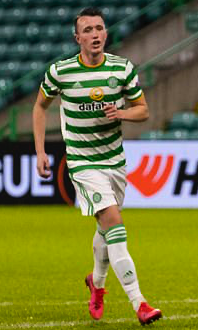 THE BHOY DAVID…non-stop David Turnbull put in a top-class performance.

The Dons escaped again from the corner-kick when Ferguson raced back to clear a scoring header from Christie off the line. From yet another set-play, Scott Brown, who will be an Aberdeen player next season, headed over the crossbar.

Then came the controversial no-goal decision after Edouard’s strike and the half came to a halt with the French ace blasting high over from a cross from Kenny.

The best of the early second-half opportunities fell to Turnbull, but his close-range drive was blocked by frantic defender Tommie Hoban to rescue his keeper. The midfielder didn’t have much luck, either, when he first-timed an Edouard headed knockdown past Woods only to see the ball explode against the face of the crossbar before being hastily cleared by a relieved defence.

In the 61st minute, John Kennedy made a double substitution as he replaced Edouard and Christie with Griffiths and Tom Rogic as he tried to revitalise his team.

Four minutes later, a clearance from Brown fell to Ferguson who sliced his close-range shot wide of Bain’s left-hand post.

In the 69th minute, Turnbull had a shot blocked before collecting the rebound, easing away from a couple of challenges as he made is way to the by-line before whipping a low drive across goal that edged wide of the far post. Griffiths was a stride or two away from getting a touch. 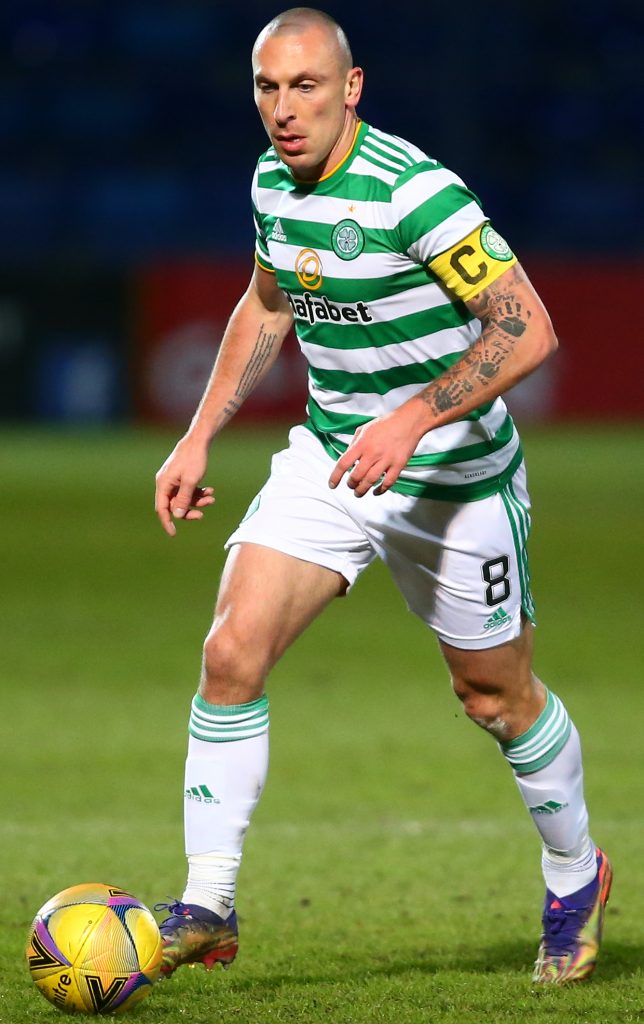 A NEW DON…Scott Brown played his last game for the Hoops at Pittodrie.

As the game wore on, the Dons made no pretence at adding to their goal as they packed their defence with red shirts. They relied totally on the break and it almost paid off in the 74th minute when Hayes broke on the left, but Bitton slid in to deflect his low cross for a corner as Florian Kamberi hovered.

Hayes then gave Woods a scare with a misdirected header from a Greg Taylor left-wing cross with the ball just edging wide of his upright.

In the 80th minute, Brown fired over the crossbar from 18 yards and was immediately replaced by Karamoko Dembele.

Six minutes later, a frustrated Turnbull was booked after a push-and-shove match with Dylan Geouch brought a free-kick to the Dons from referee Willie Collum.

At least, the midfielder actually still looked interested as the game was ticking down to what looked like another failure.

Griffiths, though, had other ideas as he demonstrated the killer instinct that has been missing for most of the campaign.