CELTIC are still at the Premiership summit – but only after walking a tightrope against a battling Dons side at Pittodrie this evening.

Filipe Jota thumped in a double with Matt O’Riley claiming the other on a nervy night in the north-east when the Hoops took their eye off the ball and invited the home side back into the encounter after the interval.

The defence didn’t deal with two set-plays that created a problem, but they showed true grit to get the job done.

But this was far from an easy watch although there had been a controlled start by the Hoops as they probed for openings and there was a flash of inspiration in the tenth minute when O’Riley send Liel Abada scampering free on the right wing following a swift free-kick.

NUMBER ONE…Filipe Jota races in unguarded at the back post to claim the opening goal.

WE HAVE LIFT-OFF…Filipe Jota races away after netting the first.

The ball deflected into the air and Reo Hatate was waiting to hit it first-time as dropped to his feet, but he didn’t quite catch it spot-on and his effort was comfortably held by Gary Woods.

A couple of minutes later, Abada and Anthony Ralston combined on the right for the full-back to flight in a superb cross, but Daizen Maeda was off target with a wayward header from eight yards.

Abada was involved again when Celtic took the lead in the 17th minute. The Israel winger picked out O’Riley who drifted in from the right onto his left foot before sending a searching pass to the back post.

The defence hesitated and the opportunistic Jota raced in to tuck the ball away neatly from almost under the crossbar.

Three minutes later, the visitors were celebrating once again when O’Riley claimed his first goal for the club since his £1.5million arrival from MK Dons last month.

THREE CHEERS…Matt O’Riley is joined by Anthony Ralston and Liel Abada at the second goal.

Declan Gallagher headed out a Callum McGregor chip and it fell perfectly for the stylish midfielder to smash back with his left foot from the edge of the box. It took a nick off the inside of David Bates’ right boot before sweeping low past the helpless Woods to his left.

The Dons were left shell-shocked as Ange Postecoglou’s men took an early stranglehold on the contest.

Juat after the half-hour mark, Hatate received a lecture from referee Willie Collum following a tussle with Calvin Ramsay, but if the match official had been watching closely he would have noticed an original blatant push into the back of the Japanese ace by the Dons defender.

A minute from half-time, Jota had the ball in the net again, but it was chalked off for an infringement on Ramsay before he carried into the box and walloped the ball beyond Woods.

Celtic, three goals ahead at the break in their previous two games against Giovanni van Bronckhorst’s Ibrox side and Motherwell, had to be content with two on this occasion.

The Dons had huffed and puffed throughout the 45 minutes, but Joe Hart did not have a solitary shot to save in the opening half in which Celtic had looked comfortable in possession and utilised the scorching pace of Maeda through the middle to immediately turn defence into attack with the rare long ball. 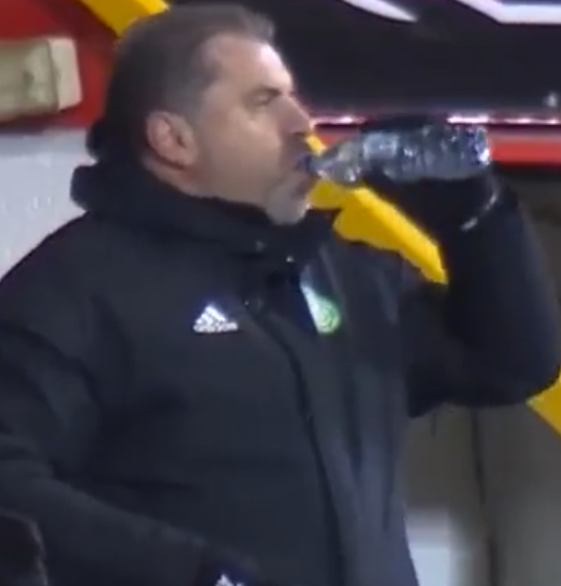 I’LL DRINK TO THAT…Ange Postecoglou hits the bottle at Pittodrie.

In the 49th minute, Bates was the first player to be booked after a wayward clatter on Abada on the touchline. There could be no complaint from the offender.

In the 56th minute, the Hoops defence switched off for a fatal moment at a free-kick to allow the Dons back into the game. No-one picked up Christian Ramirez at a low free-kick from Funso Ojo and the American striker had time before slamming a low shot past the stranded Hart.

A minute later, the home side had the ball in the net again, but Ramirez was clearly offside before thumping the ball home.

The Dons took heart from the goal and, amazingly, they levelled in the 61st minute and once again the Hoops defending was woeful. This time they gifted Lewis Ferguson a free header at a right-wing free-kick and Hart had no chance.

A minute later, the Hoops were back in front when Jota got on the end of a Ralston header to fire a shot into the ground and over the helpless Woods.

The Dons claimed offside against Abada, but the winger was not interfering with play as Jota tucked away his second of the night.

It had been an astonishing passage of play at a rocking Pittodrie as Celtic once more displayed their never-say-die spirit. 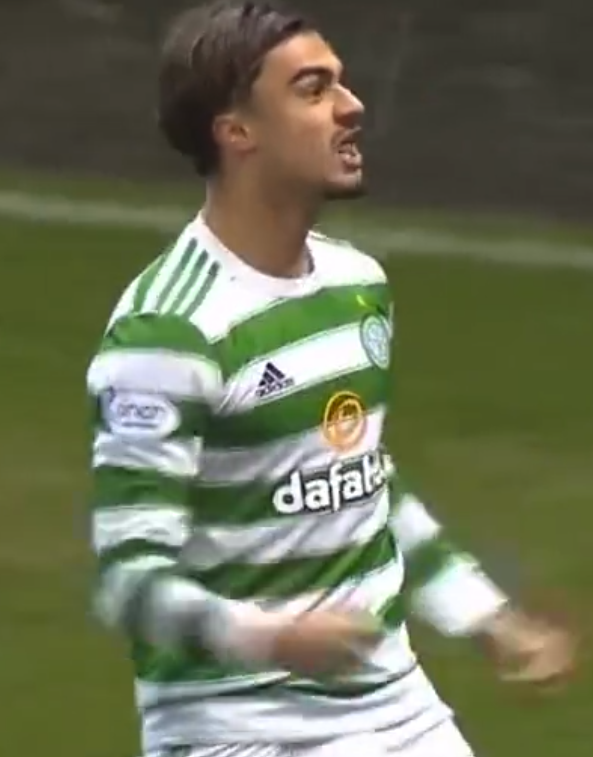 Hart then produced a fine save to deny Ferguson with a back-post header following a deep left-wing cross from Jonny Hayes. The Hoops rearguard were struggling to deal with crossballs as the home side utilised the flanks.

In the 75th minute, Hart threw himself a goal as Ferguson fired in a free-kick that flew a couple of feet over the crossbar.

Postecoglou made the anticipated substitutuions when he sent on Giorgos Giakoumakis and Nir Bitton for Maeda and a minute later.

The manager had to bring cohesion and order back to his line-up after they had lost their way a little inder a fierce response from Stephen Glass’ side after the interval.

Bitton blew the opportunity of setting up his coutryman Abada in a break from a corner-kick, but his loose pass was booted clear by Hayes. A bit more accuracy and the winger would have been in on goal.

In the 89th minute, the Hoops sent on Tom Rogic and James Forrest for O’Riley and Abada as Postecoglou made certain the points were heading back to the east end of Glasgow.