Celtic Quick News on News Now
You are at:Home»Match Report»AC MILAN 4 CELTIC 2: ANOTHER CALAMITY AND A TALE OF TWO KEEPERS
By CQN Magazine on 3rd December 2020 Match Report

AC MIlan followed up the back-to-back 4-1 hammerings from Sparta Prague with this victory and the Hoops have now conceded a ridiculous 17 goals in their five Group H games in an utterly embarrassing European campaign that sees them with one miserable point from a possible 15.

This evening’s encounter highlighted the urgent requirement of the club to get a new goalkeeper in next month’s transfer window.

Vasilis Barkas seems incapable of making a save of any note and he let the team down yet again by allowing the Italians back into the game when Neil Lennon’s men led 2-0.

Ryan Christie gave away a needless and crazy foul to gift the Serie cracks a free-kick 25 yards out in the 24th minute. It was a stupid challenge that earned the midfielder a booking that will keep him out of next week’s final game against Lille.

Hakan Calhanoglu swung in the deadball effort and could not believe his luck when he saw Barkas remain motionless in the middle of his goal. The ball swept in at the left-hand side of the rooted No.1.

However, in the 74th minute, AC Milan keeper Giamluigi Donnarunma demonstrated how it should be done when Christie came so close to making it 3-3 when he fired in a free-kick that was heading for the top corner of the net.

It looked a goal all the way until the Italian catapulted across his line to push the ball to safety. Therein lay the difference.

Neil Lennon has to solve his No.1 problem or Celtic cannot feel safe. They had a two-goal lead in Lille and were pulled back to 2-2. They led 1-0 last week in Prague and toppled 4-1.

A two-goal advantage tonight evaporated because of lamentable goalkeeping.

Celtic were in dreamland in the first 14 minutes, two goals ahead and it could have been four as they threatened to demoralise the Italians. 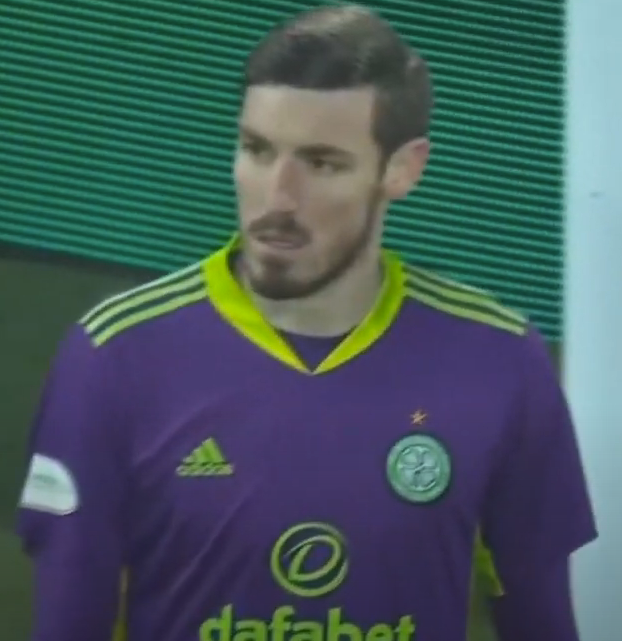 Tom Rogic netted in the seventh minute and Odsonne Edouard doubled the advantage shortly afterwards with the visitors looking more assured and poised than they have all season.

And then they were undone with two goals inside three minutes after some suicidal defending with keeper Barkas looking far from convincing yet again. Any shot on target looks a reasonable bet to hit the net with the Greek around.

And he came close to gifting the home side a third before the interval with a sloppy clearance that ended with a shot off target as he scurried across his line.

However, it looked so good for Lennon’s embattled side when they took a deserved lead after some enterprising play from the kick-off.

Jeremie Frimpong looked lively on the right, Scott Brown was assured in midfield and Rogic was showing some clever touches while Edouard was displaying some of his old menace..

The first goal came out of nothing when the AC Milan defence dithered and gifted the ball to Rogic. He pounced on the opportunity, took two touches and then drilled an unstoppable low left-foot drive past Donnarunma at his right-hand post.

Three minutes later, the Aussie came within a whisker of a second goal when he whipped in a left-foot effort from the edge of the box that edged just wide of the upright with the goalie helpless.

In the 13th minute, Callum McGregor should have scored a second after some good work by Frimpong and Edouard saw the ball drop to him 10 yards out, but his first-time shot lacked accuracy and the keeper shovelled it to safety.

But a minute later, Edouard did knock a second into the Milan net after a sublime pass from Christie sent him clear. The Frenchman showed his customary cool as he lifted the ball over the outrushing shotstopper with the greatest of ease.

But Barkas allowed the Italians into the tie with his inability to move for a long-range shot and he was beaten again in the 26th minute when Kristoffer Ajer and McGregor got into a fankle in front of goal and Samuel Castiligo found it too easy to beat the keeper from close range.

Five minutes into the second-half, the vulnerable Hatem Abd Elhhamed was posted missing as Frimpong and McGregor were too easily taken out of the equation before Jens Petter Hauge slotted the ball behind the floundering Barkas.

Three shots on target, three goals. Not a great statistic for any self-respecting goalkeeper.

In the 53rd minute, Barkas made a save when a shot was hit straight at him after a terrible pass out of defence from Ajer. It was his only success all night.

Nine minutes later, Frimpong was hopelessly wide with a shot when he should have hit the target at the very least. It was turning into one of those nights that are happening all too often for Celtic this season.

Lennon tried to freshen up the team by putting on subs Olivier Ntcham, Ismail Soro and Patryk Klimala for Rogic, Brown and Christie, but it was too late after AC Milan scored a fourth.

Some candy-floss defending from Elhamed allowed Hauge to walk past him before setting up Brahim Diaz and it was inevitable the ball would end up in the net when he was confronted with Barkas.

Neil Lennon has his work cut out before the Premiership encounter with St Johnstone at Parkhead on Sunday.