THERE were raucous celebrations amid the chaos, the inharmonious din punctuated with the incessant demanding chants of ‘We want four.’ The joyous chorus reverberated around the stadium, vibrantly piercing a stubbornly cold February evening in the east end of Glasgow. The euphoric supporters whooped it up as their grandstanding collection of joiners, electricians and plumbers continued to showboat against demoralised opponents, repeatedly outmanoeuvring them in all areas of the pitch. The acclaimed victors were safe in the knowledge their position in the next round of the Scottish Cup competition was secure long before the strident shriek from referee Dougie McDonald’s whistle finally, and mercifully, put the hapless home team out of their misery.

John Barnes, staring into the darkness with expressionless eyes, had just presided over the worst result in Celtic’s history. 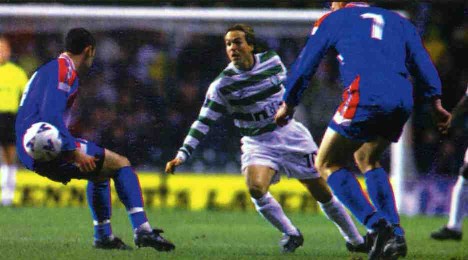 As the players of part-time, second tier Inverness Caley Thistle cavorted and cartwheeled in front of their exultant travelling band in the immediate aftermath of their extraordinary 3-1 success on the Tuesday evening of February 8 2000, the Head Coach admitted he was clueless. In two days’ time, he would also be jobless. And virtually unemployable with an unremovable stain on his CV. After two years of soul-searching, from the safety of a location many miles from Kerrydale Street, Barnes eventually declared, ‘It had been an accident waiting to happen.’

Celtic had gone into the Scottish Cup-tie on the back of a morale-sapping 3-2 home defeat from Hearts, a result that left them ten points adrift of Rangers. Displaying a refreshing never-say-die spirit, Eyal Berkovic, another costly mistake by Barnes, volunteered his opinion that he believed any chance of winning the league title was already blown with sixteen games still to play. Hardly, the sort of stirring comment from an individual you would welcome in your trench when the going got tough.

The distress flares were already being looked out after the feeble capitulation against a hardly-awesome Tynecastle outfit. Celtic were two ahead inside the opening half-hour after goals from Lubomir Moravcik and Mark Viduka and the bulk of the 59,896 crowd settled back to watch a procession. Instead, Darren Jackson, sold to Hearts in the summer, displayed an adroit touch seldom witnessed during his Celtic days when he set up Colin Cameron for an early response. Ten minutes after the break, Gary Naysmith, who terrorised Vidar Riseth with his sorties up the left wing, hit the equaliser and, with only seven minutes to go, substitute Tommy Johnson gave away a penalty-kick with an awkward challenge on the wily Jackson. Cameron duly sidefooted the award beyond Jonathan Gould. Barnes cut to the chase in his summing-up, ‘If we continue to play like this, we’ll be lucky to finish second.’

It was clear there was disharmony among the ranks at Parkhead, the initial surge under the so-called ‘Dream Team’ had all but petered out. And yet no-one in the 34,389 attendance the following Tuesday would have given the visiting Highlanders a ghost of a chance. Barnes didn’t realise as he prepared for his first Scottish Cup-tie that it would also be his last. Steve Paterson, the Caley Thistle boss, came with a game plan and his players stuck to it, their willing endeavour putting the home side to shame. The encounter was only sixteen minutes old when the visitors put down their marker. Barry Wilson’s header beat a seemingly half-hearted gesture from Gould as the ball soared over the keeper’s left shoulder to open the scoring. The goal must have alerted the lacklustre Celtic players they might have to roll up their sleeves to earn a win bonus. Two minutes later, Mark Burchill attempted to play in Mark Viduka, his pass was blocked and rebounded straight back to the young striker and, without hesitation, he slammed it low past Jim Calder. It was time now for Barnes’ team to keep their collective foot on the throttle.

Amazingly, though, Caley Thistle were back in front in the twenty-fourth minute and Celtic by now might have been awakening to the fact that this might not be their night. Olivier Tebily, with a few options, needlessly gave away a right-wing corner-kick. Bobby Mann scorched in a header that looked as though it was speeding for the outside of Gould’s right-hand post. Unfortunately, Lubomir Moravcik, of all people, lost his bearings and lunged at the ball to deflect it into the opposite corner. The nearest the home fans got to applauding a first-half equaliser came in the twenty-eighth minute when Stephane Mahe blitzed in a ferocious left-foot drive which was turned onto the woodwork by Calder. The half-time whistle was greeted by a cacophony of boos, drowning out the cheers of disbelief from the 3,000 travelling supporters who were only forty-five minutes away from witnessing one of the tournament’s most sensational results. 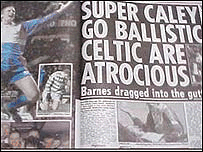 A full-blown mutiny was played out between management and players in the Celtic dressing room at the interval. Barnes, watching helplessly, offered little in the way of taking charge of an explosive situation. If any single moment encapsulated the fact he was in over his head this was it. The experienced Moravcik sat in a corner and watched the madness unfold. Assistant Eric Black had a go at Viduka to provoke a reaction. He certainly achieved his goal – the Aussie, seething with rage, took off his boots, threw them in a bin and told a bewildered Barnes and Black he had absolutely no intention of going out for the second-half. Years later, Ian Wright, who replaced Viduka for the second-half, revealed, ‘Mark Viduka came in at half-time, took his boots off and said, “Fuck this”. We couldn’t believe it. He refused to play and that’s the first time I had ever seen that. I thought he was a disgrace. I remember leaving the ground that night and we had to have a police escort because of some of the Celtic fans were going crazy. When Viduka came out, they actually cheered him!’

Celtic had half-a-game in which to galvanise themselves, resuscitate their Cup ambitions, restore some pride and give their fans reason to believe. With no-one to motivate them – either on or off the field – the players, some probably still alarmed over what they had just witnessed, performed dismally. The malaise even got to the usually imperturbable Moravcik. Goal thief Wright had ghosted into a superb position on the left-hand side of the box and a simple square pass would almost certainly have resulted in a goal. However, the Czech, unusually selfish, had a go from an angle and wildly slashed the ball high and wide. Celtic were heading for the exit with more than a third of the contest still to be played. Regi Blinker got in a fankle with Wilson who went down easily. The match official pointed to the spot and it would be churlish, not to mention pointless, to debate the award all these years later. Paul Sheerin placed the ball neatly into one corner as Gould went to the other. Thereafter, the Highlanders were content to play keep-ball and a dispirited Celtic team went through the motions to the utter frustration of their disillusioned support.

One of the most damning and revealing insights into the shocker came from Caley boss Paterson when he summed up, ‘From what I had seen of Celtic in recent games, they seemed to lack direction and leadership.’ He didn’t specify if his comments were directed at performers on or off the field. He would have been accurate on both counts. 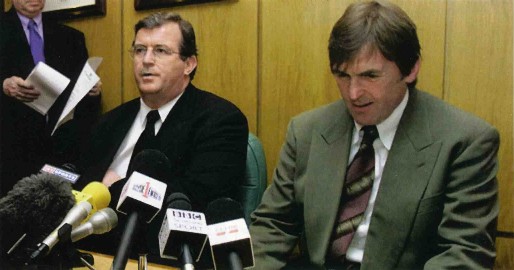 According to Chief Executive Allan MacDonald, Barnes came to him the midst of the confusion and asked, ‘What do I do next?’ MacDonald replied, ‘I don’t know, but I’ll let you know.’ Stories of the rumpus in the dressing room had reached the ears of the press who wanted to know more. Barnes answered, ‘We had a bit of a problem. There was a situation, so there is no real point in hiding that fact. It was a serious situation and there will be meetings about it in the coming days. After that, we’ll release a statement.’

Kenny Dalglish had missed the debacle after spending time in La Manga where he had a holiday home. MacDonald made it clear he would have preferred the club’s Director of Football Operations to be at Parkhead on the evening of a Scottish Cup-tie. ‘I asked him not to go,’ admitted the club supremo. Dalglish returned the following day as MacDonald stepped into the breach. He planned to put the club icon in charge of the team. He said, ‘That was the solution. That was me saying to the Director of Football Operations, “You run the show because he (Barnes) wasn’t managing the dressing room.” Kenny comes back and John works for Kenny. But John refused, so he was fired.’

Eric Black and Terry McDermott were also shown the door. Shortly before he was sacked, Barnes was allowed to spend £5million on a Brazilian centre-half by the name of Rafael Scheidt from Gremio. He came with glowing recommendations and three full caps for his nation. No-one had taken into consideration that, back in the nineties, Brazil were sponsored by soft drinks giants Coca-Cola who insisted on the team playing one game practically every month. All sorts of players up and down the country received caps for non-event friendly internationals. Scheidt, who, for obvious reasons, preferred to be known by his Christian name, also claimed he had knocked back AC Milan to join Celtic. He started one first team game at the club – a 4-1 win over St Johnstone in March – and was booted into oblivion when Martin O’Neill took over. Dalglish was quick to distance himself from the Scheidt deal. He said, ‘It was John who signed all the players at Celtic. I don’t know who was the worst although there were more bad ones than good ones.’

*Extract from The Winds of Change by Alex Gordon. Published by CQN Books in November 2015 and available now via CQNBookstore.com with a free copy of the Total Larsson DVD coming with your order. You can order HERE or click on the image below.