CELTIC’S Champions League ambitions were buried amid the rubble of a dreadful defensive display in the Olympic Stadium in Athens this evening.

Craig Gordon had to pick the ball out of his net twice and, remarkably, the Hoops keeper did not have a SOLITARY save to make all night.

Two efforts on target were enough to wreck the bid of Brendan Rodgers and his troops to gatecrash the lucrative group stages for the third year in succession.

This defeat comes at the end of a turbulent week for the Parkhead men.

A draw last week, a loss at Tynecastle and a defeat in the Greek capital have added up to a miserable spell for the club.

And we don’t want to even get started with what is happening OFF the field.

Questions will be asked and answers will be demanded. Now, though, is the time for cool heads. 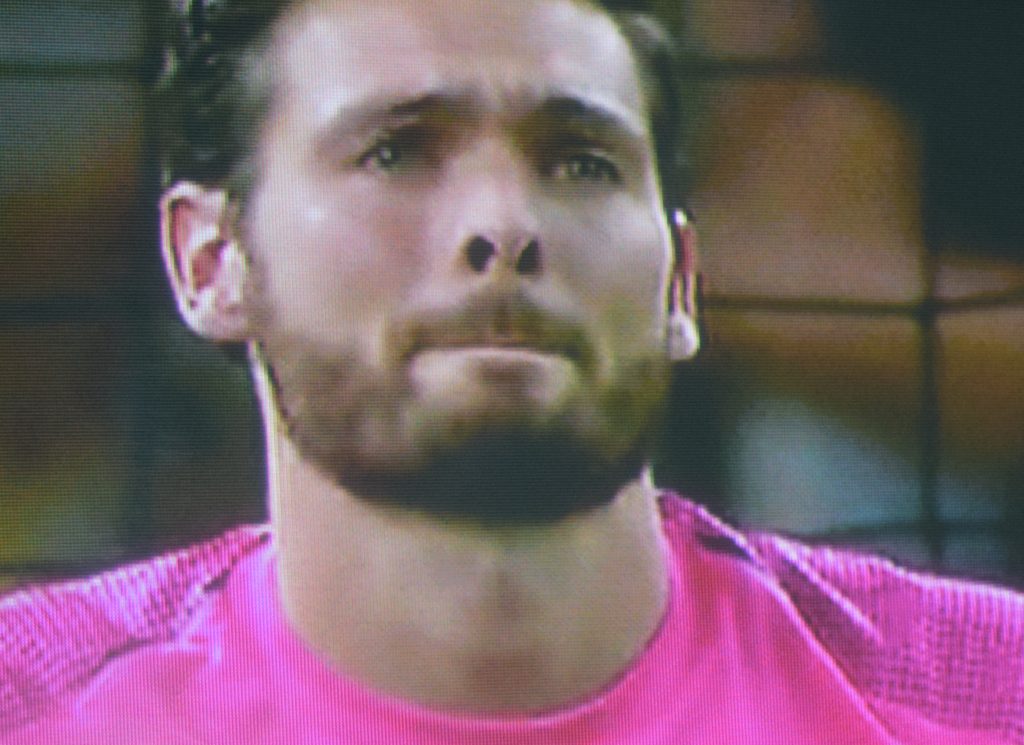 TEARS AND FEARS…Craig Gordon can’t disguise the hurt as Celtic head out of the Champions League.

This is the first occasion in Rodgers’ reign the team have lost two consecutive games and the most frustrating aspect of this latest reverse is that their conquerors are far from being an accomplished team. And, yet, Celtic have failed to beat them twice in the space of a week and now have the consolation of the Europa League to anticipate.

At the moment, it will feel like an unacceptable option.

The sixth minute brought disaster for the Hoops with a goal that should have been prevented.

Mikael Lustig should never have allowed fellow-Swede Niklas Hult the time and the space to deliver a ball over from the left.

The central defence took root with no-one moving quickly enough to cut out the threat. Olivier Ntcham and Kieran Tierney weren’t alert to the obvious danger and Callum McGregor allowed Rodrigo Galo to drift in behind him.

The Greek drilled the ball first-time and Gordon was motionless as the effort sped low past him at his right-hand post.

Celtic had surrendered a cheap goal in almost identical circumstance in Glasgow last week when no-one reacted quickly enough to a ball across from the left. 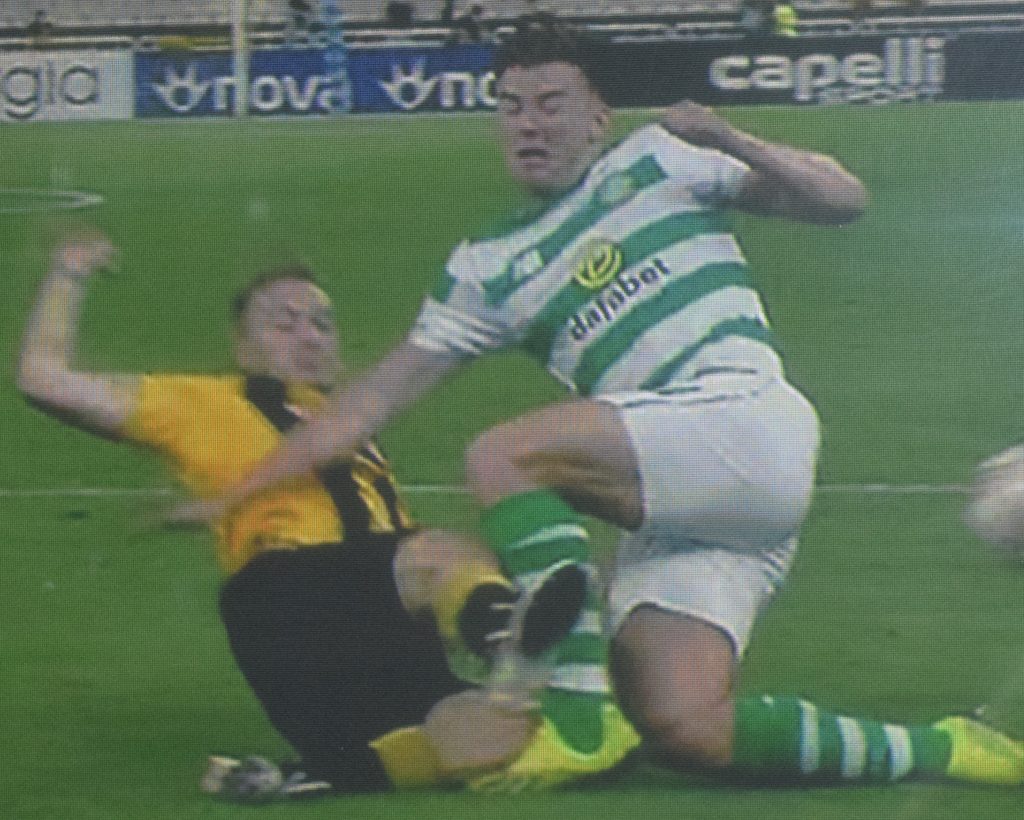 AEK tried the same tactic at their own ground and must have been delighted – and a little surprised – that it paid a massive dividend yet again.

The Hoops players looked at each other and must have realised they had been undone yet again with the greatest of ease and predictability.

Yet they had their chances to get something back in the opening half against opponents who were no great shakes and who, once again, relied on counter-attacking tactics even in front of their own fans.

There was another scare in the nine minute when the Greeks were once more allowed to build on the left, but this time the finishing drive flashed wide of the upright with Gordon hurtling across his line.

Three minutes afterwards, there was signs of retaliation when Tierney and McGregor combined on the left to set up Tom Rogic about 25 yards out.

The Aussie slipped as he attempted to place his shot, but it was still on target and the keeper had to look lively to get down to his right to hold the ball.

Several players were losing their footing on the turf that looked as though it may have been too heavily watered on a humid night in Athens.

Jozo Simunovic was also creating problems with sloppy passes and Rodgers looked frustrated on the touchline at one point when a pass went out for a throw-in for the Greeks when the Croat was under no pressure whatsoever.

His wayward ball against Hearts contributed largely to the only goal of the encounter, but it didn’t look as though the experience had helped sharpen up his reflexes on this occasion. 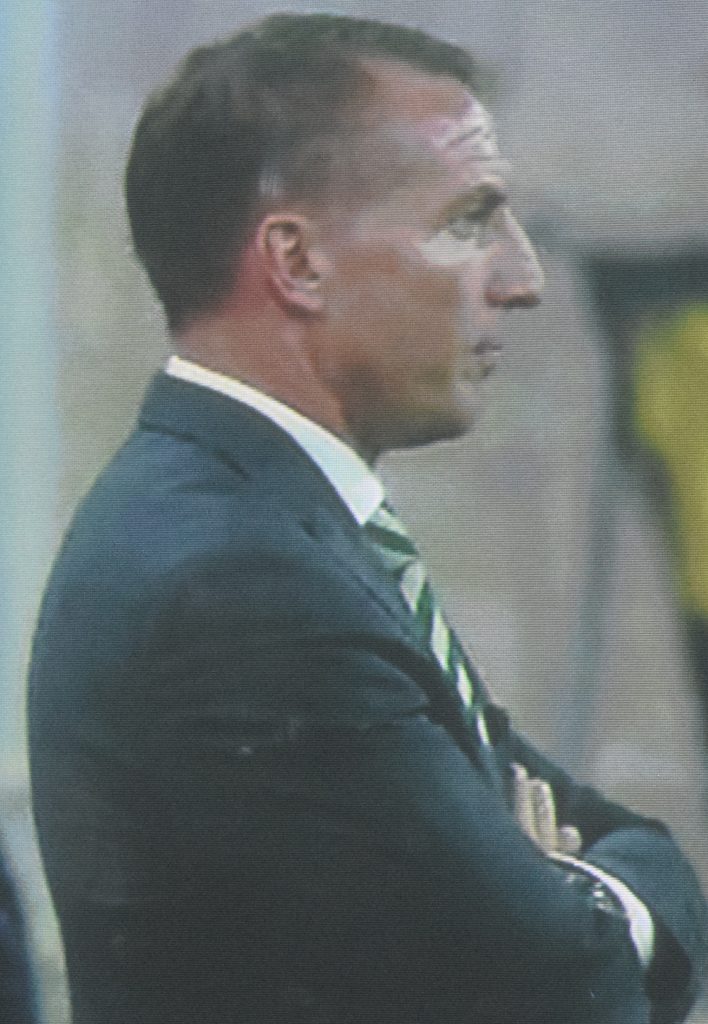 LOST IN THOUGHTS…Brendan Rodgers is a man alone in Athens.

In the 23rd minute, Rogic produced a cute lob to the back post, but it carried just too wide as McGregor tried vainly to get a touch.

A few moments afterwards, the Aussie drifted in from the right onto his left foot, but his elevation was out and the ball flew wildly over the bar.

Celtic, though, were creating chances and Leigh Griffiths gad a wonderful chance to level in the 38th minute.

McGregor slung in a superb pass from the left and the striker got in front of his Greek marker to get a touch from eight yards, but the ball slipped just beyond the far post.

In the 42nd minute, Markos Livaja was booked for almost throttling Scott Brown in an off-the-ball incident. The Russian referee could quite easily have reached for the red card. 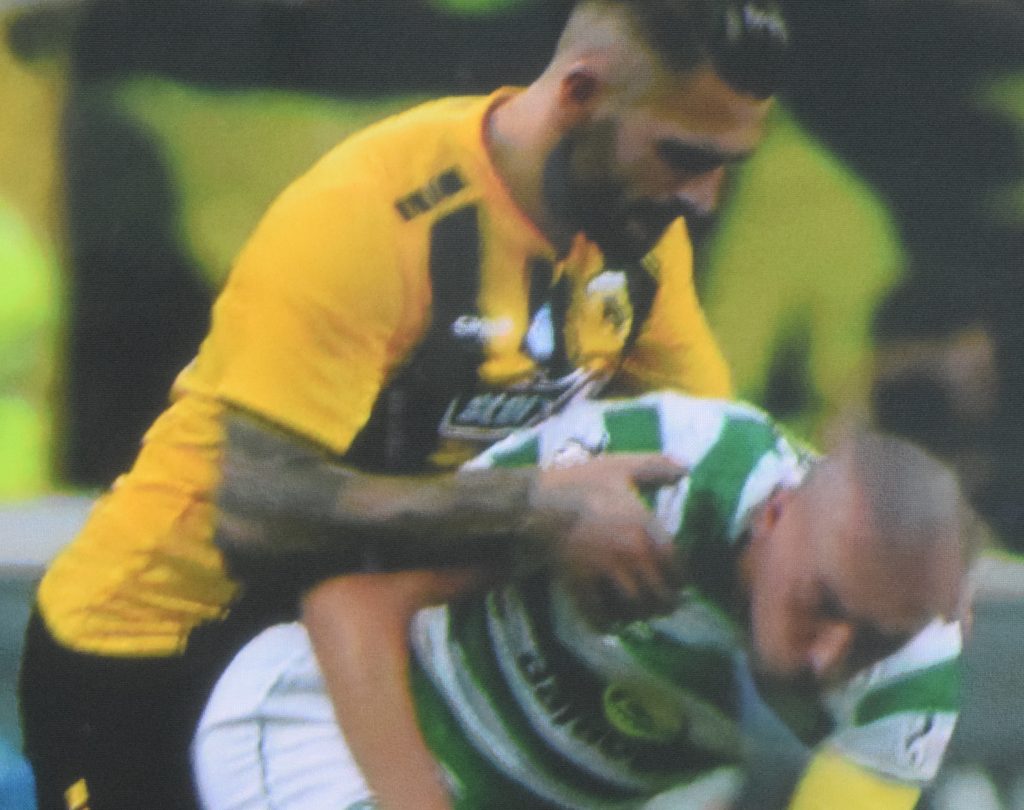 PAIN IN THE NECK…Scott Brown is throttled by Markos Livaja.

Celtic had another opening when Griffiths whipped in a left-wing corner-kick, but Hendry headed weakly over the bar.

Five minutes after the turnaround, Lustig gave away a cheap free-kick on the touchline with a lazy challenge on Hult. What came next summed up the evening for the visitors.

The deadball was fired towards the back post, it went over everyone’s head before it was knocked back into the penalty area. Lustig was caught on his heels again and Livaja came in totally unmarked to head what proved to be the winner beyond the exposed Gordon.

It was schoolboy defending and at this level it will most assuredly be savagely punished.

Rodgers sent on Moussa Dembele for Lustig in the 61st minute and Scott Sinclair followed for the tiring Rogic in the 75th minute.

And the Englishman threw the Hoops a lifeline when he pulled one back three minutes after his arrival.

Dembele rolled a ball in front of Tierney and his left-wing cross was met perfectly by the diving Sinclair whose header ripped past the keeper into the net. 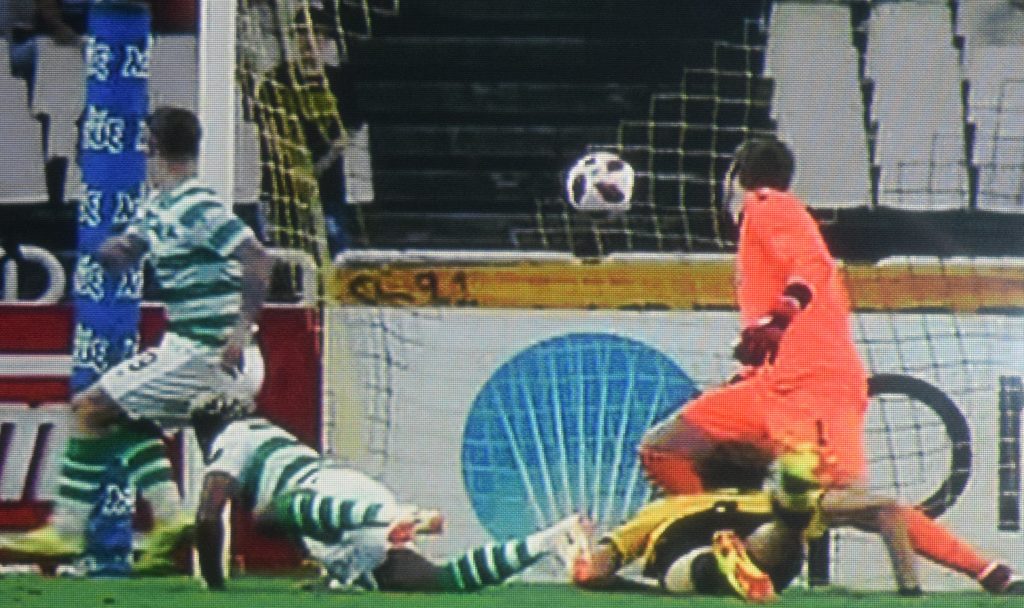 HEADS I WIN…Scott Sinclair directs in Celtic’s consolation goal. Sadly, it wasn’t enough in the end.

Celtic had their chances to score the second goal that would have put them through, but it wasn’t to be.

Their hopes went with a stoppage-time attempt from Simunovic that skipped wide of the post.

The inquest is bound to be painful.