Celtic Quick News on News Now
You are at:Home»Match Report»AIK STOCKHOLM 1 CELTIC 4 (Agg:1-6): HOOPS TO THE FOUR AS THEY RUN AMOK
By CQN Magazine on 29th August 2019 Match Report

BIG-GAME hunter James Forrest shot Celtic through to tomorrow’s Europa League group stages draw in Monaco after a typically crucial strike for the Hoops in Stockholm this evening.
The elusive winger started and finished a sweeping move in the first-half to ease the pressure on Neil Lennon’s side after a spirited and enthusiastic start from AIK.
Forrest was the man on the mark with a big goal that took the sting out of the Swedes and, within two minutes of the AIK equaliser on the night, Mikey Johnston went on a spectacular left-wing sortie that ended with the second goal nestling in the home side’s net.
And Christopher Jullien and Lewis Morgan added two others late in the game as the champions romped to a vital victory. 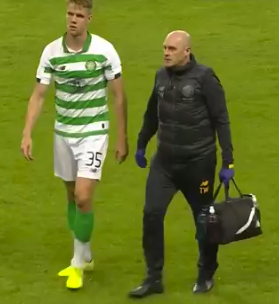 OFF…Kristoffer Ajer’s game is over.
It was a night of celebration to maintain the European adventure, but there were injury scares over Kristoffer Ajer and Odsonne Edouard who both limped out of the tie and must be major doubts for the game at Ibrox on Sunday.
In the second minute, the Hoops breathed a sigh of relief as they escaped conceding a soft early goal. The defence was slow to react after Callum McGregor had given away a free-kick just inside his own half.
AIK spread the ball to the left and there was no pressure as the cross floated in and Kolbeinn Sigthorsson got in front of Nir Bitton 16 yards out to flash the ball wide of the sprawling Craig Gordon, but his drive smacked off the outside of the right-hand post and bounced to safety.
So, even that early in proceedings, Lennon’s men had been given a massive warning that if they switched off there was every chance they would be punished.
The Swedes, as expected, were aggressive and physical and Nabil Bahoui was first to go into the book for a wayward and late challenge on Jullien after the central defender had cleared the ball.
In 15 minutes, Ajer was in some distress and came off with Lennon forced to throw on Anthony Ralston with Hatem Abd Elhamed still injured. 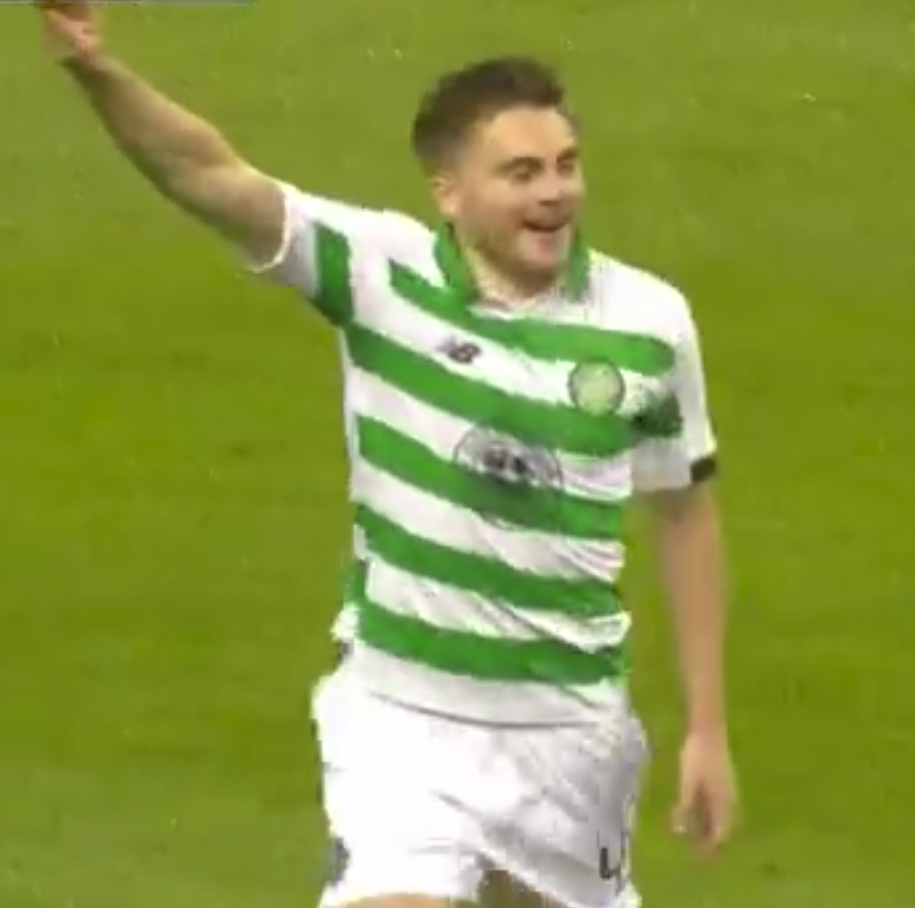 AWAY DAZE…James Forrest holds his arm aloft after his excellent opening goal.
A minute later, big-game specialist Forrest struck with the effort that left AIK searching for four goals to turn this tie around.
The Hoops broke forward at speed on the right through the Scotland international who flicked the ball to Edouard who timed an impeccable pass inside to the rampaging winger and he allowed the ball to run across him to outwit a defender.
Forrest then took aim and fired an unstoppable left-foot drive high into the net from 12 yards with the keeper helpless.
The strike was perfect in its execution and its timing. It clearly knocked the home side out of their stride after an upbeat start.
AIK’s main weapon was raiding on the left wing where they appeared to have acres of space with the Parkhead players slow to pick up the runners.
In the 28th minute, the Hoops central defence was too easily parted by and quick one-two, but Bahoui’s final effort lacked oomph and was gratefully accepted by Craig Gordon.
On the half-hour mark, Nir Bitton was booked by the ref for what he obviously believed was time-wasting at a free-kick after Seb Larsson had manhandled Johnston to the ground. There was little doubt the match official was influenced by the yells from the home fans.
In the 32nd minute, the ref awarded the Swedes a penalty-kick when it looked as though Larsson had made the most of a coming-together with Boli Bolingoli. The former Sunderland player went down in theatrical fashion and the whistler bought it.
Larsson took the spot-kick and swept it low into Gordon’s left-hand corner as the keeper went the wrong way. It was the softest of the soft awards, but AIK reacted as though they had been gifted a lifeline. 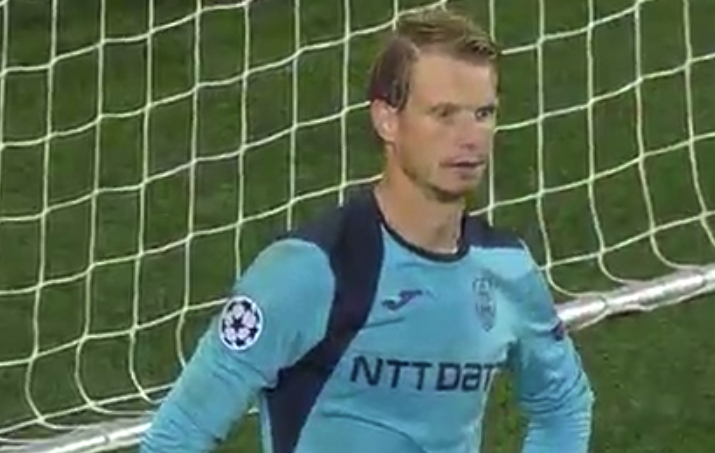 BEWILDERED…AIK keeper Oscar Linner after Mikey Johnston makes it 2-1.
Inside two minutes, though, Johnston scored a remarkable solo strike to restore Celtic’s three-goal advantage.
The wily winger picked up the ball on the left, skipped away from two challenges and raced towards the bye-line. His low driven cross obviously took keeper Oscar Linner by surprise and he deflected the ball over the line as Ryan Christie raced in behind him.
It was Johnston’s goal, though, and was thoroughly deserved after his mesmerising footwork to get into the danger zone.
In the 40th minute, Christie sent Edouard running clear, he paused for a moment and then lobbed the ball away from Linner, but saw his effort hit the left-hand post and bounced away. It should have been a goal and the Frenchman knew it.
After a bout of some clever interpassing, Christie fired in an explosive 35-yard drive that was pushed over the bar by the hurtling shotstopper.
Celtic looked a danger going forward with Forrest, Edouard, Christie and Johnston posing a threat, but there were still worries over the defence and the inability to shut down crosses from both flanks where AIK enjoyed far too much freedom.
In the 47th minute, Gordon saved the Hoops when Chinedu Obasi was allowed to waltz past Christie and Jullien with the greatest of ease, but the keeper read his intentions and raced from his line to block his parting shot.
Scott Brown was shown a yellow card by the Montenegro referee as they complained about the antics of their opponents. The match official would be unlikely to ever be welcomed to Parkhead to officiate in a home tie.
Some of his decision-making bordered on the bewildering. That also included a booking for Edouard later in the action.
Karl Mets was also booked by the over-fussy ref, but he turned a blind eye after Johnston was thumped from behind as frustrations grew in the AIK ranks. 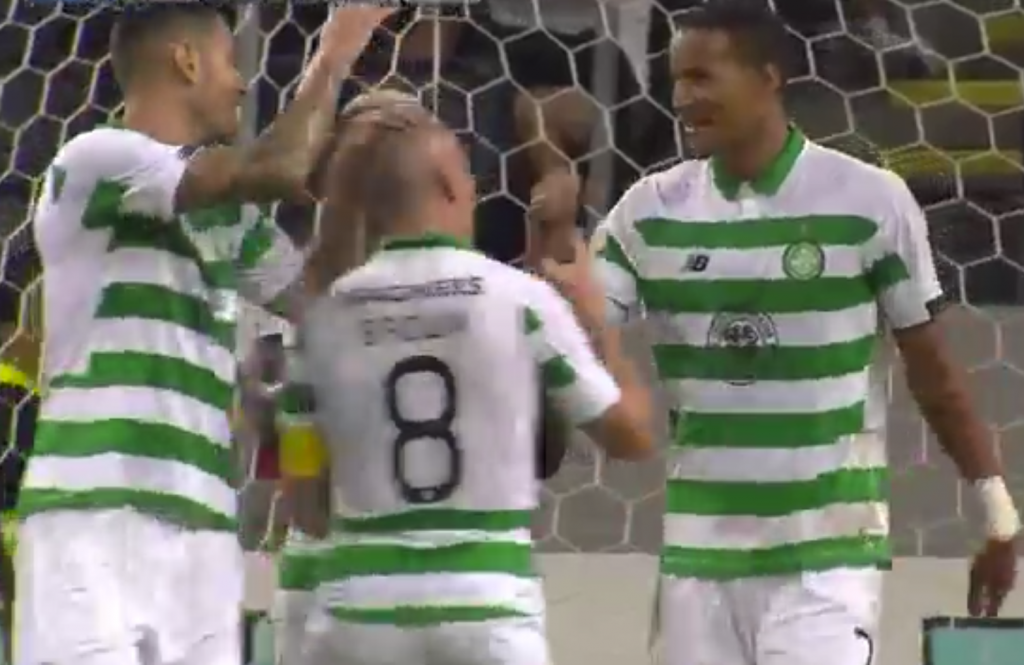 FRENCH FANCY…Christopher Jullien celebrates his first Celtic goal as he makes it 3-1.
In the 56th minute, Linner atoned for his lack of concentration at Johnston’s goal when he reacted well to an angled drive from Forrest and managed to divert the effort for a corner-kick.
Five minutes later, Celtic rolled forward in a sweet move with three players involved, but Johnston’s finishing shot from 18 yards soared high, wide and anything but handsome.
In the 70th minute, jaunty Johnston was replaced by Morgan as Lennon looked ahead to Ibrox on Sunday.
There was a worry when Edouard limped off in the 76th minute to be replaced by Vakoun Issouf Bayo with Leigh Griffiths remaining on the bench,
In the fading moments, Morgan fed in a left-wing corner-kick and there was a melee in front of the keeper and Jullien materialised to poke the ball home from close range. 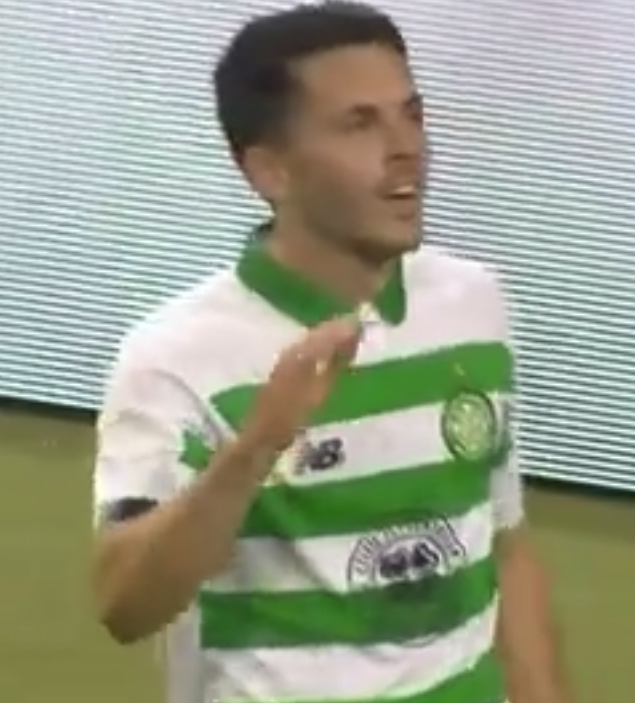 SUB SINKS SWEDES…Lewis Morgan makes sure with the fourth goal.
And sub Morgan netted a simple fourth deep in stoppage time with a neat header from a cross from that man Forrest.
Overall, we’ll accept a third win in four away European ties while the other ended in a draw. The second-half was a bit more disciplined as far as defending went and the players saw it through to the final whistle.
The killer touch in the closing stages put gloss on a hard-worked victory.
Job done – now for the ballot.
TEAM: Gordon; Ajer (sub: Ralston 15), Jullien, Bitton, Bolingoli; Brown, McGregor; Forrest, Christie, Johnston (sub: Morgan 70); Edouard (sub: Bayo 76).
Click Here for Comments >
Share. Twitter Facebook Google+ Pinterest LinkedIn Tumblr Email
Previous ArticleCONFIRMED: EDOUARD LEADS EURO BID
Next Article EDOUARD GIVES INJURY UPDATE