Celtic Quick News on News Now
You are at:Home»Latest News»AIR WE GO FOR 10 IN A ROW: HOOPS’ INDOOR BAN
By CQN Magazine on 6th June 2020 Latest News

CELTIC players will not be allowed to enter Lennoxtown’s training ground building when they return on Thursday.

Neil Lennon’s squad hope to start preparing for the proposed August 1 start to the new season by assembling in groups – provided their coronavirus tests are negative.

However, the nine-in-a-row champions cannot go inside the covered complex as part of strict Scottish Government guidelines.

Lennon, speaking to Celtic TV, said: “We start doing the medical side of things on Monday and Tuesday.

“We’ll all get tested on Wednesday and, hopefully, we can start in small groups on Thursday.

“It’ll be groups of five, so we’ll have two groups in the morning, two groups at lunchtime and two in the afternoon.

“There will be certain protocols. They can’t go in the building, so all the stuff will be done outside. That’s fine and we’re just delighted that we can have a sort of semblance of training. 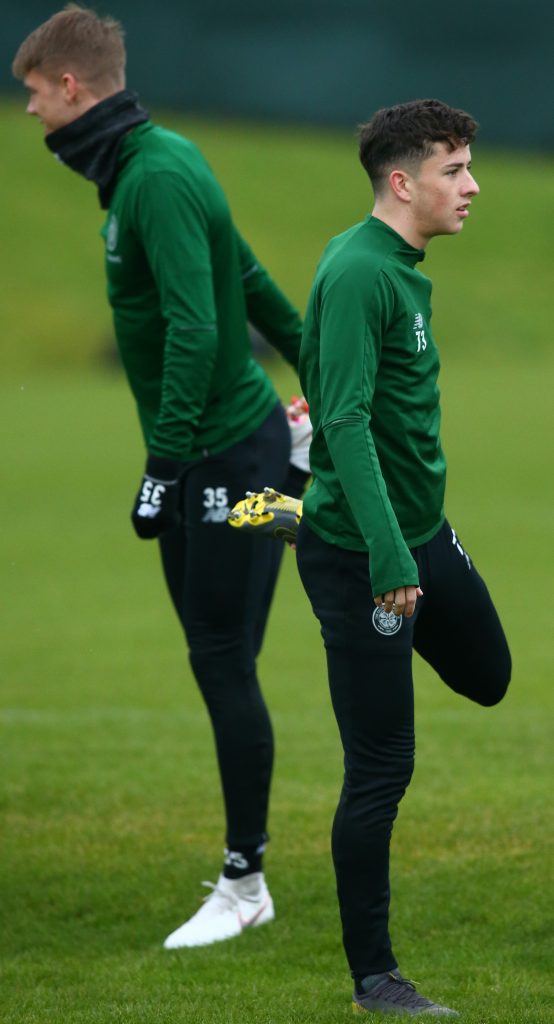 TRAINING HIGH JINKS…Kristoffer Ajer and Mikey Johnston go through a routine at Lennoxtown.

“We haven’t seen the players for a while, you tend to miss them and miss that camaraderie and atmosphere around the place.

“Just getting the players back, getting them familiar with the atmosphere, the training and surroundings again, that’s all going to be important.

“Although we’ve got a June 11 start, hopefully within a week or two, we can start training in bigger groups.

“All that is for the process of getting ready for the first week in August.”

The Hoops were last in action on March 7 when Leigh Griffiths claimed a hat-trick in the 5-0 win over St Mirren at Parkhead. Odsonne Edouard, who finished the campaign with 28 goals, and Callum McGregor, with a penalty-kick, were the other marksman.

Football went into lockdown shortly afterwards due to the cornavirus pandemic and the Hoops, 13 points ahead with eight games to go, were awarded their record-equalling crown when the SPFL hierarchy brought the season to a premature conclusion.

The tilt at the historic 10 in a row starts in August.