The Hoops’ comeback striker rose to the occasion when he nodded in the champions’ second goal in the crucial 2-0 Premiership victory over Ross County at Parkhead last night.

David Turnbull had opened the scoring midway through the first-half, but, alarmingly, Neil Lennon’s men passed up a number of excellent opportunities before Griffiths made certain in the 61st minute with a perfect header from a delightful right-wing cross from Ryan Christie.

The 30-year-old marksman, a scorer in extra-time in the 3-3 Scottish Cup Final against Hearts and also from the penalty spot in the 4-3 shoot-out success on Sunday, was rewarded with a rare start against the Dingwall outfit.

And he celebrated with the twentieth headed goal of his Hoops career and former Welsh international powerhouse Hartson admitted the 5ft 8in forward’s knack of beating towering defenders to high balls reminds him of Swedish superstar Larsson. 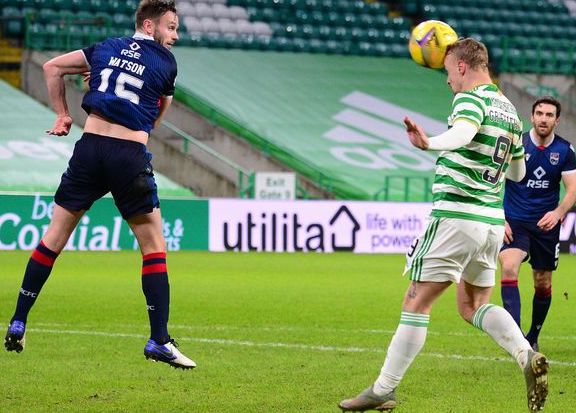 Griffiths demonstrated his prowess in the air earlier in the campaign when he nodded in a last-gasp effort against St Johnstone in Perth to guide Scotland’s title kings to a vital 2-0 triumph.

Hartson, speaking to Celtic TV, said: “That’s a couple of good goals, headed goals, that we have seen from Leigh this season.

“Again, he finds space in the box.

“It’s a difficult header because he is going away from the ball and he almost has to generate that power for himself. Great neck muscles there to head it back where it came from and it’s a brilliant header.

“He’s delighted with his night’s work even though he could have had a couple more.

“It’s like another player I played with was Henrik Larsson. Henrik was magnificent, not the tallest, but he had a great leap and Leigh is a fantastic header of the ball.”