KRISTOFFER AJER has revealed the Celtic players received an ear-bashing from Neil Lennon at half-time on Wednesday – despite being THREE goals ahead against Nomme Kalju.

The Hoops boss wasn’t entirely satisfied with his team in the Champions League second round first leg qualifier and told them so in no uncertain fashion.

Ajer had opened the scoring with a pulverising header, Ryan Christie had doubled the advantage with a neat penalty-kick and comeback Bhoy Leigh Griffiths had sent Paradise into ecstasy with a sublime free-kick for the third on the stroke of half-time.

The cheers of the support were still echoing around the stadium as the fans saluted the striker’s first competitive goal in seven months.

But Lennon made sure he was heard above the din has he hammered home some points to his players.

Ajer, speaking to the Sun on Sunday, said: “That’s just football. I am used to that from every single team I have been in.

“This gaffer is no different — he gives you a clear message when you need it.

“It is healthy for a team to get a wake-up call sometimes. 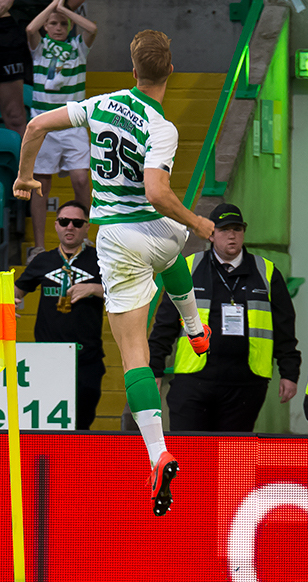 “At half-time, he spoke to us and it made us even better. You could see that from the first whistle of the second-half.

“We were straight on it, so it was good for the team.

“We were 3-0 up when the gaffer spoke to us – but that’s what makes this club special. You can be three goals up, but still be unhappy with the performance.

“There were a few slack moments in the first-half and we weren’t happy with that.”

Ajer added: “The manager sent a clear message to us and we got better. He has put his mark down from day one of coming in.

“He won all the trophies that he could last season and we have had a great start this year.

“He has done fantastic, but it’s still early days this year, so we need to keep working.”

Goals from Christie and Callum McGregor gave the Hoops a 5-0 win and they should settle the tie in Estonia on Tuesday and then await the victors between Cluj and Maccabi Tel Aviv with the Romanians 1-0 ahead before their trip to Israel.