CROCKED Kristoffer Ajer is planning on a remarkable quickfire return to the Celtic first team.

The Norwegian central defender was involved in a sickening clash of heads during an accidental collision with Livingston’s Craig Halkett in the 72nd minute of last week’s goalless draw in West Lothian.

A groggy Ajer had to be helped off the pitch by the Hoops medics and needed surgery on a broken eye socket.

The 20-year-old utility ace also had steel plates inserted in his head, but, amazingly, he has claimed he could be back BEFORE the turn of the year.

Ajer insisted: “Everything went well and I can start working out again in a week.

“All I need to be careful about at first is that I avoid contact exercises. The plan is that I can play football again in four to six weeks.

“There were three fractures and titanium plates were put in.

“The surgeon operated the tear through the mouth, fixed the fracture over the eye by cutting a bit of the eyebrow.

“Then he had to lower under the eyelid to fix the fracture under the eye. The surgeon was very pleased when I spoke to him afterwards.

“Never before have I looked harder. Finally, I look like a Scottish central defender.” 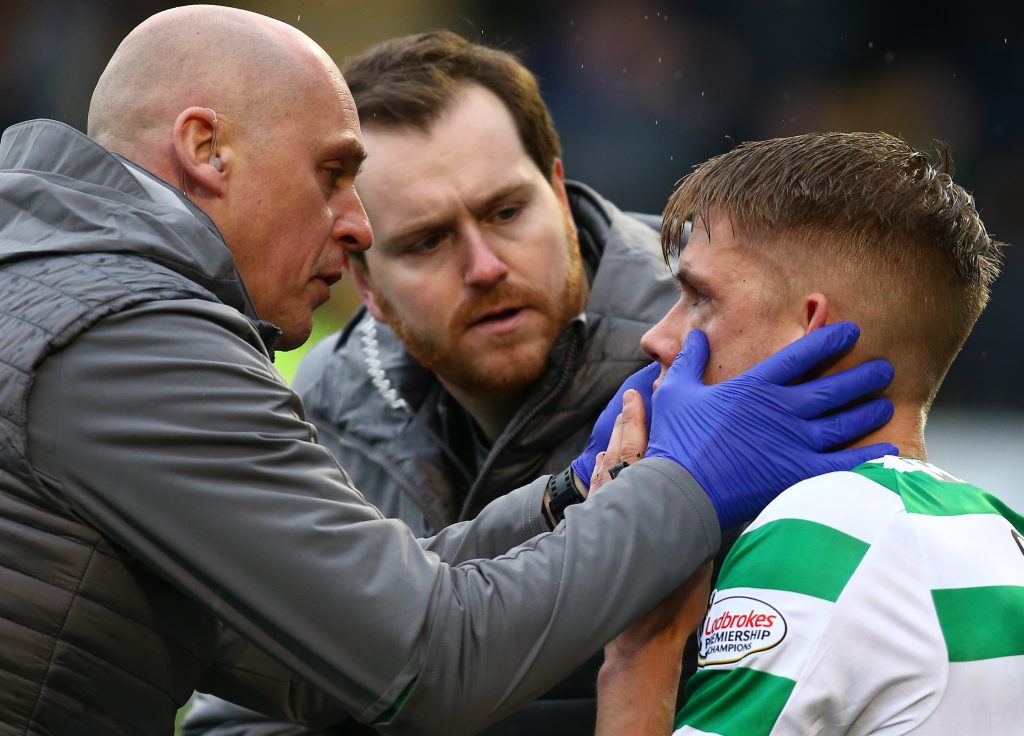 GAME OVER…Kristoffer Ajer’s injury is surveyed by medic Tim Williamson before the player was helped off at Livingston.

Ajer had replaced on-loan Filip Benkovic to play alongside Dedryck Boyata after Brendan Rodgers had decided not to risk the skilful Croatian on Livi’s dreaded artificial surface.

The £13million Leicester City player had to be withdrawn before the kick-off against Kilmarnock on their plastic pitch at Rugby Park earlier in the campaign.

However, Rodgers was forced to introduce Benkovic against Gary Holt’s side and, thankfully, he came through without mishap.

Despite Ajer’s refreshingly positive outlook it would appear a place in the squad for the Betfred League Cup Final against Aberdeen a fortnight tomorrow will be outwith his recovery process.

However, the talented youngster could bring down the curtain on an eventful 2018 with an appearance at Ibrox on December 29.

Ajer, of course, played a prominent part in the Hoops’ 1-0 success over Steven Gerrard’s Govan outfit in September and was involved in a first-half flashpoint moment when he was clearly booted by keeper Allan McGregor as he lay on the ground.

Referee Willie Collum witnessed the petulant kick-out by the veteran No.1, but, incredibly, took no action.

Even more startling was the decision of the SFA review panel, made up of three former referees, who witnessed video evidence and found there was no case to answer for McGregor.

Ajer could now get his opportunity to extract revenge before the turn of the year.