The giant Norwegian limped off after 33 minutes to be substituted by Jack Hendry in the 1-0 Betfred League Cup quarter-final win over St Johnstone in Perth on Wednesday.

Ajer could be out for up to six weeks if it is a serious strain and the signs do not look good following remarks from Per Joar Hansen, his international boss.

The 20-year-old back-four performer is now expected to miss Norway’s UEFA Nations League encounters with Slovenia and Bulgaria next month and his national gaffer said: “Kristoffer being out of those games is a disaster for us. He is already a very important player.

“We will check with Celtic’s doctors, but it certainly seems there is no chance of him making the games.

“Now we will have to look at alternatives, but it’s certainly not good for us to lose a player of his quality.”

Norwegian media pundit Jesper Mathison was in touch with the young Celt yesterday and confirmed the possibility of a lengthy spell on the sidelines that will give Brendan Rodgers problems, too, with crucial games at home and abroad coming up. 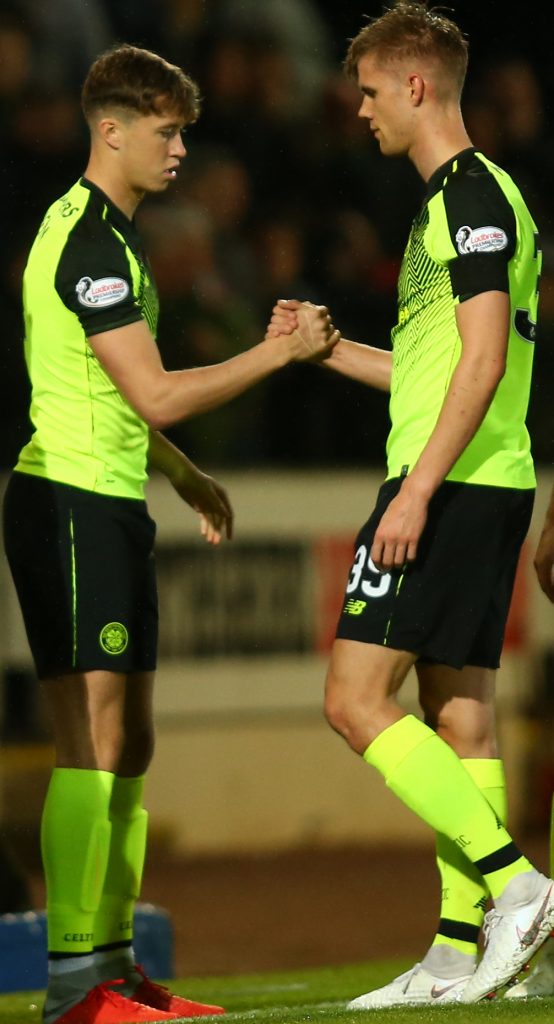 OFF NIGHT…Kristoffer Ajer is replaced by Jack Hendry in the first-half at McDiarmid Park. Pic: Geo.

He said: “I spoke to Ajer. With a hamstring injury you have to be careful you do not come back too early.

“He will miss the international matches and this is a stretch that will last a few weeks.”

Ajer will join the suspended Dedryck Boyata, red-carded in the win over St Johnstone, on the sidelines for the Betfred League Cup semi-final against Hearts at Hampden on Sunday, October 28 with a 7.45pm kick-off.

Jozo Simunovic is battling to return following injury while Marvin Compper doesn’t appear to be in Rodgers’ plans having made only one appearance since his £1.3million switch from RB Leipzig in January.

On-loan Filip Benkovic, who was so impressive in last week’s 1-0 Europa League victory over Rosenborg, had to be withdrawn before kick-off against Kilmarnock on Sunday with an Achilles problem and was not included in the squad for Perth.