The 20-year-old Norwegian has come of age this season in a central defence that has been chopped and changed for a variety of reasons during the campaign.

Dedryck Boyata, Jozo Simunovic, Filip Benkovic, Jack Hendry and Ajer have all played in front of Craig Gordon or Scott Bain. Mikael Lustig, too, has stepped in from full-back during emergencies.

The former IK Start midfielder has adapted to his position as a centre-back in recent times and clearly has an important role to play at the champions in the forthcoming seasons.

Belgian international Boyata is heading for the Parkhead exit as a free agent while Croatian Under-21 stopper Benkovic will almost certainly return to Leicester City when his loan period expires in the summer.

More responsibility will be heaped on the shoulders of Ajer and former defender and assistant manager Mjally has every confidence in the youngster – even to the point of comparing him with £75million man Van Dijk. 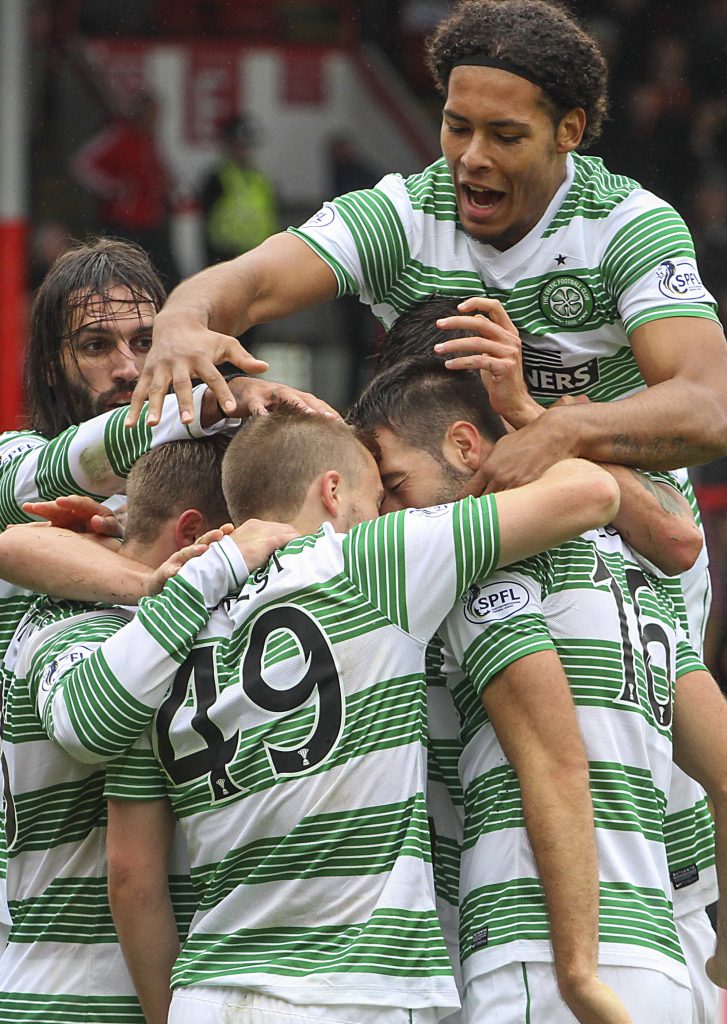 TOP BHOY…Virgil van Dijk celebrates with his Celtic team-mates after a goal against Aberdeen at Pittodrie in August, 2013.

The Swede was at Parkhead when the Dutchman, then 22, arrived at the Hoops from Gronigen in 2013 before his move to Southampton two years later and then his record-breaking switch to Anfield.

Mjallby, speaking to The Scotsman about the qualities of Ajer, said: “I’ve seen a lot of him and I’ve actually been waiting on him exploding, to a certain degree.

“He caught my eye when he started to play.

“Now he’s got more experience and he’s probably maturing a lot, as well. He’s got every chance of becoming a top, top player some day.

“Virgil van Dijk was probably further ahead when we brought him in, but you see him playing for Liverpool now with all his leadership qualities.

“At Celtic, when he was new into the club and the atmosphere of everything surrounding Celtic Football Club, it took him a while to get his leadership qualities out.

“Not football-wise, because he was too good even when he first came here, and with that it was more a case of telling him to stay focused because it was too easy for him.

“It’s important for Kristoffer as he’s so young to improve his leadership qualities before he’s contemplating going to another league.

“He could definitely follow the same path as Van Dijk. He’s got every chance.”