Celtic Quick News on News Now
You are at:Home»Latest News»AJER PRAISES BROONY: ‘THE DEFINITION OF HOW A CAPTAIN SHOULD BE’
By CQN Magazine on 1st April 2019 Latest News

KISTOFFER AJER insists Scott Brown is the “definition” of a captain following the 2-1 triumph in the explosive encounter with Steven Gerrard’s raging players at Parkhead yesterday.

James Forrest thumped in the decisive goal in the 86th minute to hoist the champions THIRTEEN points clear at the top of the Premiership as they close in on their EIGHTH successive title.

Skipper Brown played a major role throughout the 90-plus minutes where he took a couple of off-the-ball sore ones for the cause.

He was confronted by a fuming Andy Halliday minutes after the final whistle in chaotic scenes that could have sparked further trouble. 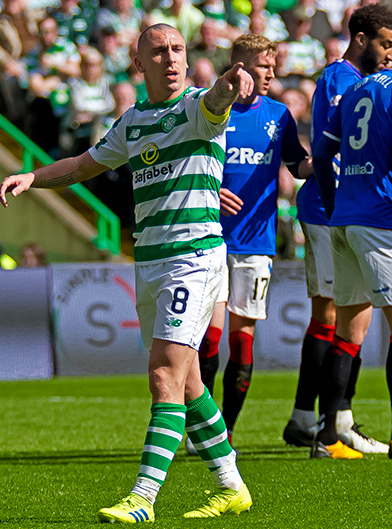 IN CHARGE…Scott Brown rallies the troops and points the way ahead.

Brown was criticised by Ibrox boss Steven Gerrard – as CQN reported yesterday – for goading the small band of away support at the end.

It brought down the curtain on an afternoon where the 33-year-old midfielder had been ELBOWED in the face by the red-carded Alfredo Morelos and PUNCHED on the jaw by Ryan Kent, who, astoundingly, escaped any punishment.

The Colombian hitman was dismissed for the FIFTH time this season while the on-loan Liverpool winger can expect retrospective action from the SFA judiciary panel once they examine evidence of the flying fist that was caught on film.

Halliday picked up a second yellow card in the aftermath melee and he, too, faces a suspension.

Norwegian defender Ajer was one of the champions’ top performers alongside his captain, Forrest and first goalscorer Odsonne Edouard and, speaking to the Evening Times, said: “I think it is important to stick up for your team-mates when you are out there.

“It was a clear sending-off for the first one, I think everyone can see that. I didn’t have as good a view for the second incident, but the first one with Morelos was very clear. 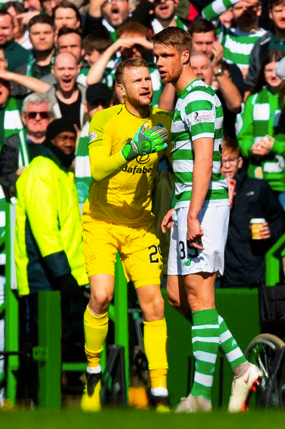 “People can criticise Scott, but, for me, he is the definition of how a captain should be. He is a top-class captain when he is on the pitch, but also in the dressing room.

“He is always doing what he can to help the team every day and I think he is the perfect captain. I admire him a lot because he is there to get the best out of the team and he does that.

“He works his socks off.”

Ajer was involved in the ugly scenes at the final whistle, but was adamant there was nothing untoward in the Hoops’ celebrations.

He said: “I think when you play such a big game and you know how much it means then there is a lot of excitement there. It is natural to celebrate and how it should be.

“You are happy and you celebrate and it was the same when we were at Ibrox. I think Rangers enjoyed the result back in December.”

Ajer, who left the ground with stitches just about his left eye after a clash of heads with Joe Worrell, made a telling contribution when he cleared from practically under the crossbar after Scott Bain had tipped away an effort from Kent that looked destined for Worrell. 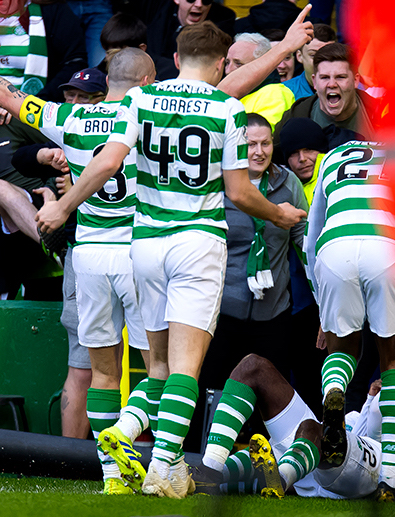 The skyscraper back-four operator also made an important crunching block on James Taverner near the end as the visitors chased the equaliser.

Ajer looked more than satisfied with both actions and added: “When I can’t score goals, you have to celebrate your own small details that you get in a game, so it was a nice block and an important one and I was really delighted. It is difficult not to show it sometimes.

“That is what you dream of by playing football, so that was fantastic.

“It was such a big win for us and it was great to be a part of it. I loved it and I feel as though I am learning and developing in the way that I want to here.

“But, although there was a lot of excitement, we have to remember that this is just another three points. It was important because it lets us go 13 points clear at the top of the table and we wanted to win after losing at Ibrox in December.

“It is good and it is a great lead for us to have, but we have to keep it going now and try to make sure that we come of Wednesday night’s game against St Mirren with the same result.