KRISTOFFER AJER insists Celtic’s recent flawless record at Hampden will mean NOTHING as they prepare to take on Aberdeen in the Scottish Cup semi-final on Sunday.

The champions have been triumphant in their last NINE encounters at the national stadium over the past two-and-a-half years.

In that space of time, the Hoops have won three Betfred Leagues Cups and two Scottish Cups and the Dons have been beaten on three occasions.

The Australian international midfielder followed that up with the winner against the Pittodrie side in the 2-1 Scottish Cup Final victory later in the campaign to complete the first domestic silverware clean sweep.

Jonny Hayes, now at the Celts, of course, had given Derek McInnes’ men a shock lead, but Stuart Armstrong fired a quickfire response before Rogic netted the last-gasp trophy-clincher. 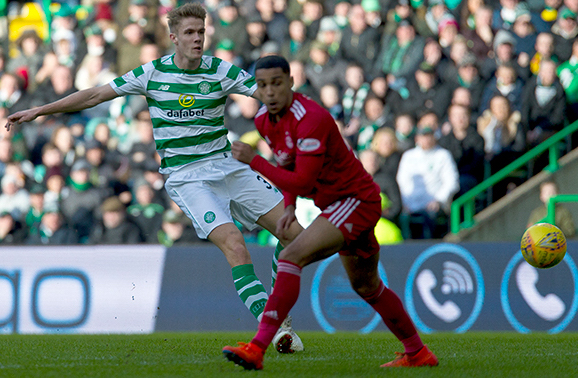 DONS THREAT…Kristoffer Ajer fires a shot at goal in the 0-0 draw with Aberdeen last month.

And Ryan Christie kicked off the treble treble bid last December with the only goal in the Betfred League Cup Final.

But Ajer is adamant all the previous success will go for nothing if Celtic do not complete the job against their old foes this weekend.

“There’s a new game coming up there next weekend and it’s one we have to win.

“We have our targets this season and we have a massive game coming up against Aberdeen.

“There’s a lot of tough teams. For example, Livingston made it very difficult for us again on Saturday. It’s the second 0-0 we have had with them this season and that tells you a lot about their defending.

“I think there’s a lot of great teams, but Aberdeen is one of the toughest.”