Celtic Quick News on News Now
You are at:Home»Latest News»AJER’S HOMING IN
By CQN Magazine on 27th July 2018 Latest News

KRISTOFFER AJER is looking forward to making a return visit to Norway on Wednesday – and is confident Celtic can make certain of place in the third qualifying round of the Champions League.

The skyscraper defender played his part in the 3-1 first leg victory over Rosenborg and declared himself satisfied with the two-goal lead.

After gifting the Norwegians a goal of a start, Brendan Rodgers’ men responded superbly with strikes from Odsonne Edouard (2) and Olivier Ntcham.

Ajer, 20, said: “Getting three goals at home is a good result to take to Trondheim. 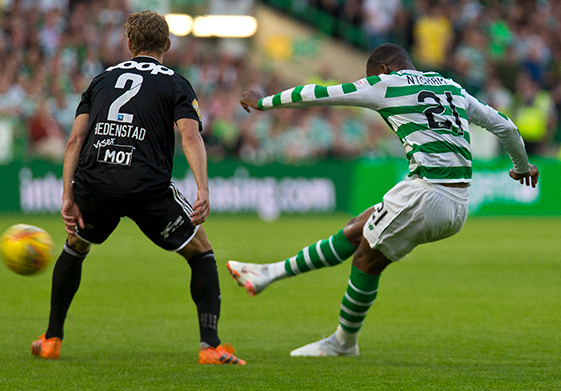 YOU BEAUTY…Olivier Ntcham sends his superb effort goalwards to make it 2-1 for the Hoops.

“You can see that they can hurt you if we are not 100 per cent at it. We conceded early and then it is difficult to come back, but we showed great character to score three fantastic goals.

“The second from Olivier was amazing to watch from the centre-half position.

“Remember, too, their goalkeeper had a fantastic game.

“We could have scored more, but we are happy with three.”

If the Hoops dismiss the Norwegians for the second successive season, they will face Greek champions AEK Athens in the next round.

* Ajer was speaking to Celtic TV.