MOHAMED ELYOUNOUSSI has pleased with Celtic fans to be patient with £5million new Bhoy Albian Ajeti.

The Swiss international striker joined from West Ham last week – after he had been scouted by the Hoops FOURTEEN months ago.

Ajeti made a hush-hush debut when he came on for Odsonne Edouard for the last 20 minutes of the 6-0 Champions League first round qualifying romp over KR Teykjavik on Tuesday to tee up a meeting with Hungary’s Ferencvaros, 2-0 victors over Sweden’s Djugardens last night, at the next stage in Glasgow on Wednesday.

The 23-year-old frontman is obviously nowhere near match fit after a lengthy lay-off when boss Davie Moyes made it clear he had no future at the London club who paid £8million to take him from Basel last summer..

Elyounoussi, who netted a double against the Icelandic outfit, believes his ex-colleague at the Swiss club will be a sensation in Scottish football once he picks up the pace. 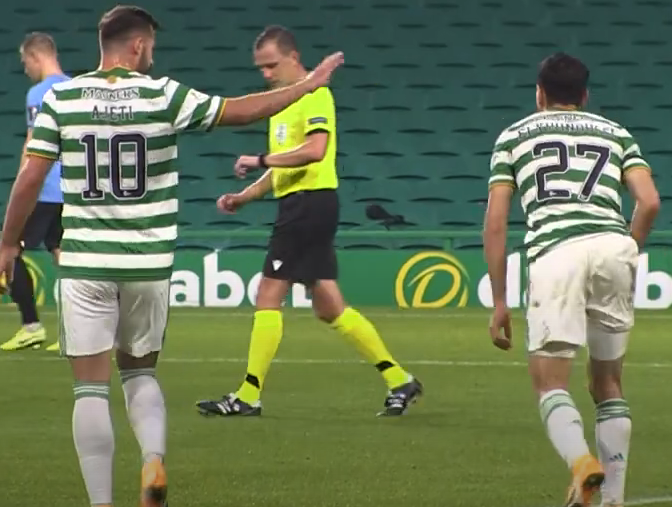 SHAKE ON IT, PAL…Albian Ajeti prepares to congratulate Mohamed Elyounoussi after his second goal.

Ajeti fired in 29 goals in 58 league games over two years and, asked if the forward had the quality to become the nation’s most prolific hitman, the Norwegian international, speaking to the Daily Record, answered: “Yeah, absolutely. I saw that in Basel when he started to play regularly.

“He got his confidence and is a good finisher with both feet as well as headers. So, hopefully, we will get his confidence back and get him back to where he was when he was with Basel. I’m sure he will be a good addition to the squad.

“Look, we just need to give him a little bit of time. He’s been on his holidays, so give him a couple of weeks to get some game time.

“But he’s a strong player physically as well as a smart player in front of the box. I think as soon as he scores his first goal, he will score a lot.”

However, it’s doubtful if Ajeti will figure even as a late substitute when Celtic take on Dundee United at Tannadice on Saturday, with a 5.30pm kick-off.

The fixture list is hectic between now and the turn of the year, but Elyounoussi added: “I love this kind of situation. It’s all about playing and recovering. It’s about doing everything right off the pitch, eating and sleeping right.

“Mentally, you are always preparing to make sure things go well.”