ALBIAN AJETI has admitted he was delighted to dodge a two-game ban to play his part in Celtic’s 4-0 win over St Mirren in Paisley last night.

The Swiss striker had been accused of simulation by the SFA review panel, but was cleared in time to start the match against Jim Goodwin’s side who went into the encounter in the knowledge they had won 2-1 at Parkhead 12 days ago.

Ajeti was delighted to play his part in the team’s third consecutive win following the 4-0 success over Kilmarnock at Rugby Park last week and the 2-1 triumph over Motherwell in Glasgow at the weekend.

The £5million arrival from West Ham in the summer scored his sixth goal for the Hoops in the runaway triumph in Ayrshire and, speaking to the Celtic website, said: “I’m very happy that I could be back playing again with the team and I’m happy we got the win again.

“I think we’re in good form right now and I’m always happy when I can play and help the team.

“We take it game by game and there are still quite a few games to go. We’re in good form right now, we’re going to build on that and we’re going to keep going with that, push forward, play as a team and try to win the games.” 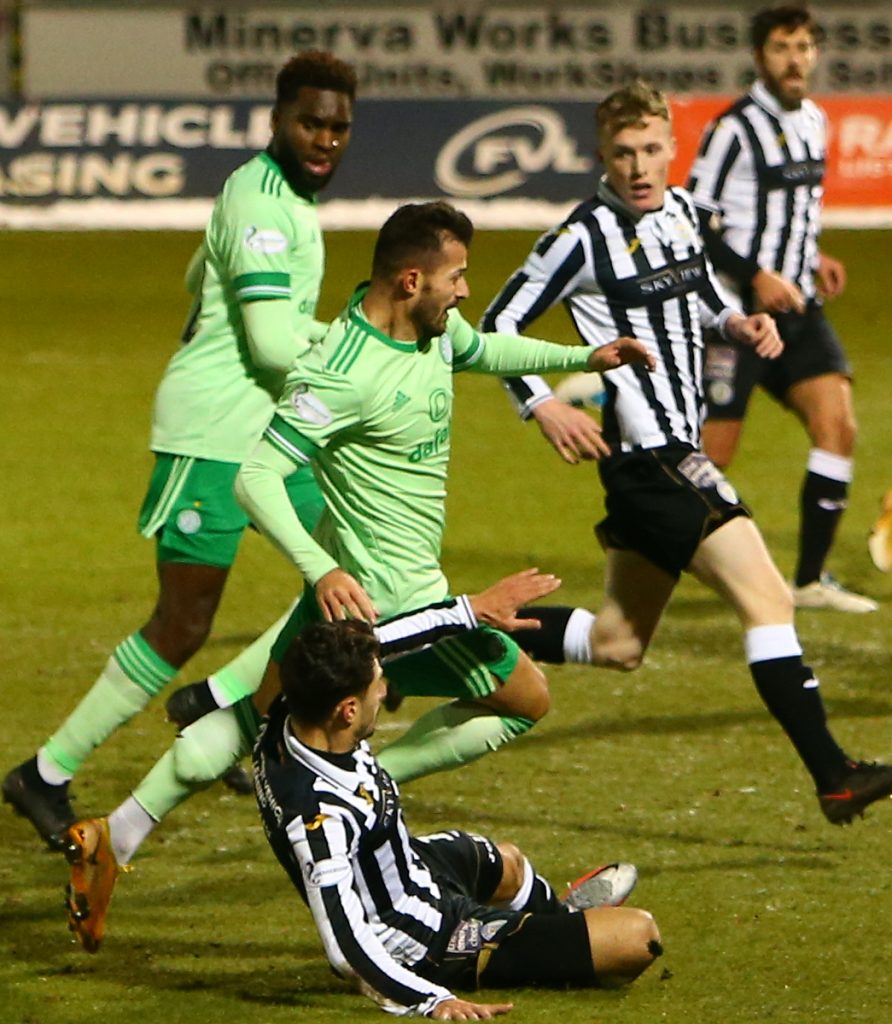 NICK OF TIME…Albian Ajeti is robbed by a St Mirren defender as he races into the box watched by Odsonnne Edouard.

Ajeti was bewildered he had been cited by the SFA disciplinary panel after going down under the challenge of Killie keeper Colin Doyle that brought the Hoops and a penalty-kick for Odsonne Edouard that flashed low into the net for the second goal.

The 23-year-old forward would have missed the action in Paisley last night and also the noon kick-off against St Johnstone in Perth on Sunday.

He added: “I was a bit surprised because I didn’t know the process or how it worked here, but I’m glad that I could play and I didn’t get the two-game ban.

“It’s going well for us. We’re winning games and playing good football and I’m always happy when I can play and even more happy when we succeed as a team. This is, for me, the most important thing.

“Sometimes the games are hard, but we accept that and we’re trying to win and we’ve been successful in the last three games.”