Celtic Quick News on News Now
You are at:Home»Latest News»ALBIAN AJETI AND THE EURO HOODOO
By CQN Magazine on 14th September 2021 Latest News

ALBIAN AJETI is hoping to score his first goal for Celtic in Europe – at the ELEVENTH time of asking.

The Swiss striker has fired blanks in his 10 previous outings for the Hoops at this level, but is likely to be given the nod to lead the attack against Real Betis in Seville on Thursday night.

Ajeti headed two second-half goals in the 3-0 Premiership win over Ross County at Parkhead at the weekend and may have done enough to convince boss Ange Postecoglou he is ready to face the Spanish aces in the crucial opening encounter of Europa League Group G.

The frontman failed to convince in his first season at the club and claimed a mere six goals after his £5million summer arrival from West Ham. 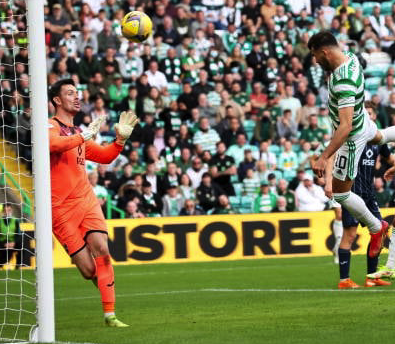 HEAD BHOY…Albian Ajeti rises and shines as he thumps in the first of his double in the 3-0 win over Ross County.

However, he is in line to take over as the main man with Kyogo Furuhashi ruled out for the remainder of the month after sustaining a knee injury while on World Cup duty for Japan a week ago in their 1-0 victory over China.

The saga over Odsonne Edouard, of course, came to an end on deadline day when he joined Crystal Palace while Leigh Griffiths has agreed a season-long loan at Dundee.

While the Frenchman headed for the exit, Greek hitman Giorgos Giakoumakis arrived, but Postecoglou has admitted he is a little behind in his match fitness and resisted giving him his debut against Malky Mackay’s Dingwall outfit on Saturday.

Thursday is likely to be a step too far and too soon for the former VVV-Venlo striker who hit 26 goals for the Dutch club last term, but could not save them from relegation to the second tier.

The adaptable Filipe Jota, who impressed on the left wing during his debut against the Highlanders, can also perform as an attack-leader, but Postecoglou is more likely to pitch in Ajeti and hope he can break his European scoring duck against the Spaniards.