Celtic Quick News on News Now
You are at:Home»Latest News»‘ALL CREDIT TO THE PLAYERS,’ RODGERS
By CQN Magazine on 15th April 2018 Latest News

DELIGHTED Brendan Rodgers hailed his Celtic players as they demoralised their Ibrox opponents 4-0 in the Scottish Cup semi-final this afternoon.

Tom Rogic and Callum McGregor netted before the interval and penalty-kicks from Moussa Dembele and Olivier Ntcham gave the Hoops their eighth victory over their Glasgow neighbours in 10 games with the other two ending in draws.

Rodgers said: “We thoroughly deserved it. In the first-half, we played well, scored two very good goals and had good composure. We were good defensively and were a threat going forward.

“In the second-half, we got the penalty and the young lad Ross McCrorie got sent off, and I still felt at times we could have been cleaner in our passing and could have one or two more goals with a final pass.

“But you can’t ask for any more, coming into a game here with so much on it, to come out winning 4-0 and playing so well, it was a great result for us.”

Victory moves the Parkhead side a step closer to a historic double treble and they are now looking forward to the Scottish Cup Final against Motherwell on May 19. 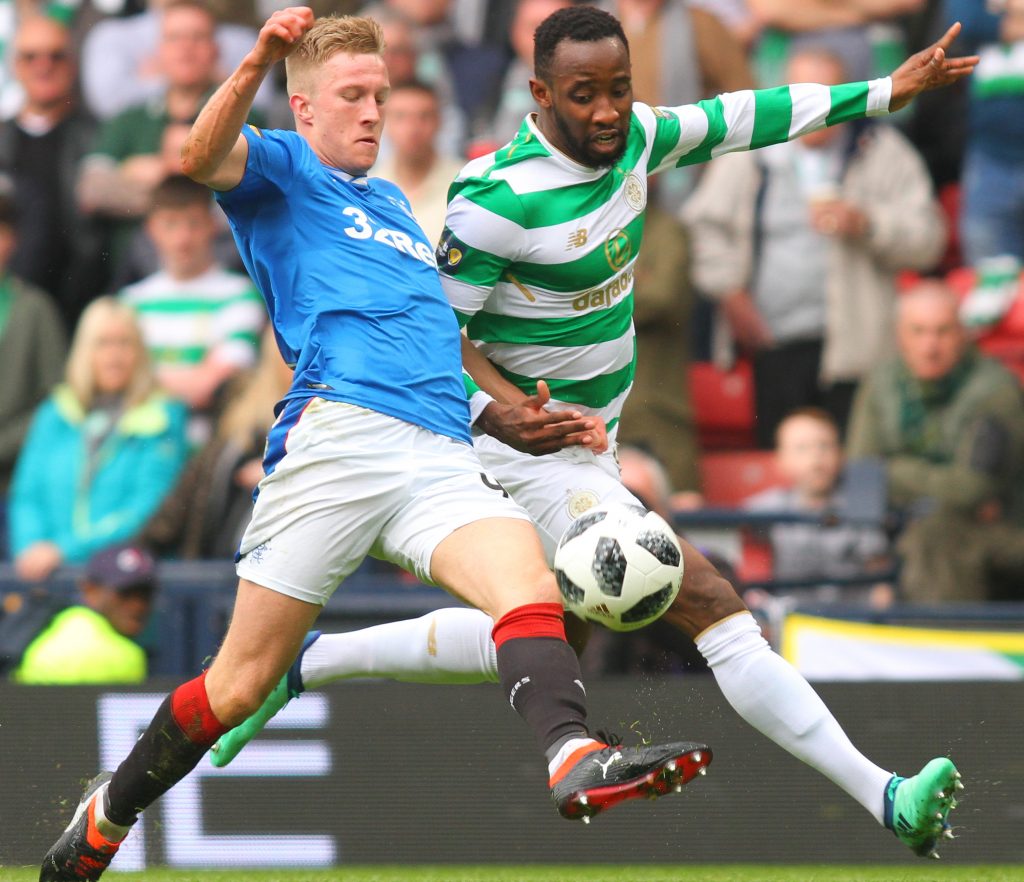 CRUNCH…Moussa Dembele takes on Ross McCrorie only moments before the Ibrox defender is red-carded. Pic: Geo.

Rodgers added: “As a coach and manager, you are always looking for that difference before the game, the one per cent, but I said to the players that the edge is them.

“They are guys who have shown all the supporters they can achieve things and when big games come they turn up.

“It’s a huge credit to them and the focus this week has been very good, it was comprehensive.

“We know when we come back here it will be a tough game. Stephen Robinson has done a great job with Motherwell. We can really enjoy this last period of the season, this was a very good performance and a good win.”

The ‘Be careful for what you wish for’ game.