When the England national team was looking for a left-sided midfielder a decade or so ago, no-one could understand why they didn’t turn to Alan Thompson, who was at the peak of his game. Here, Chris Collins looks at Celtic’s great left footed players through the years … 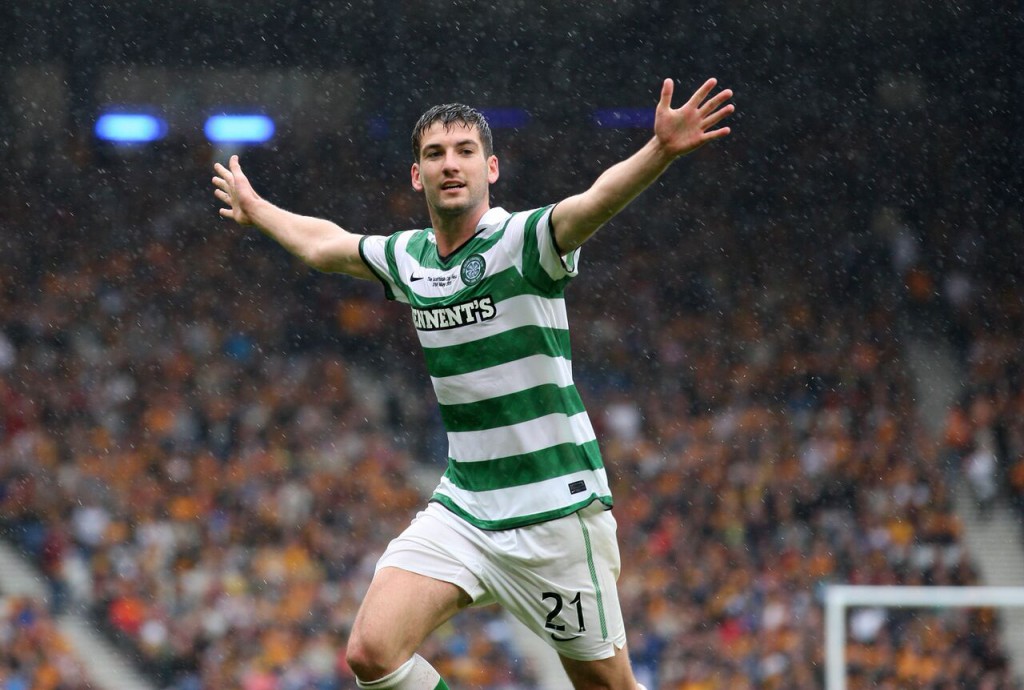 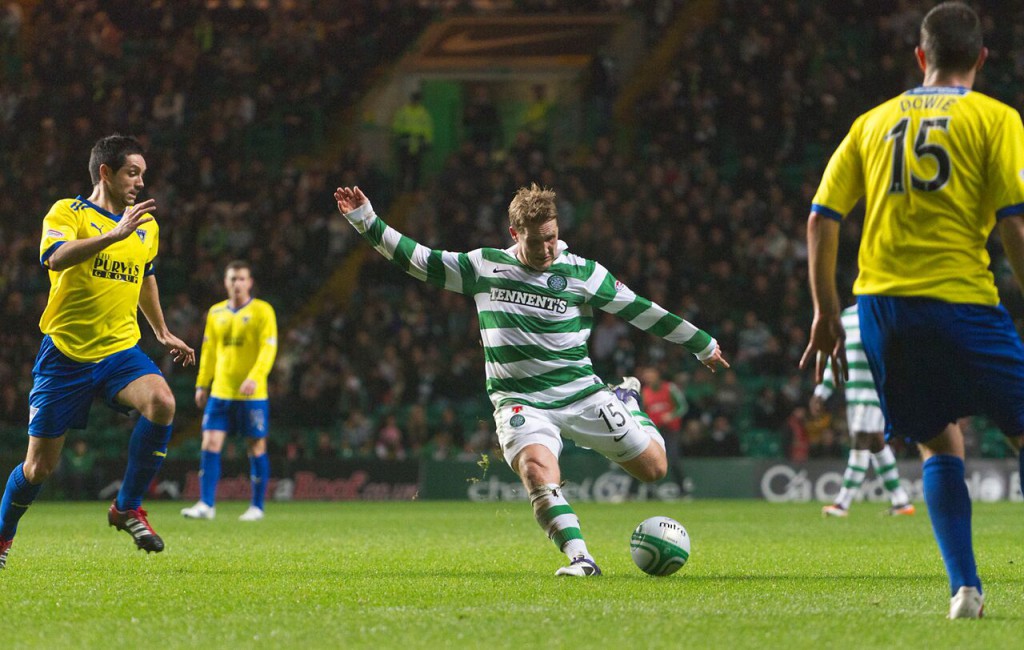 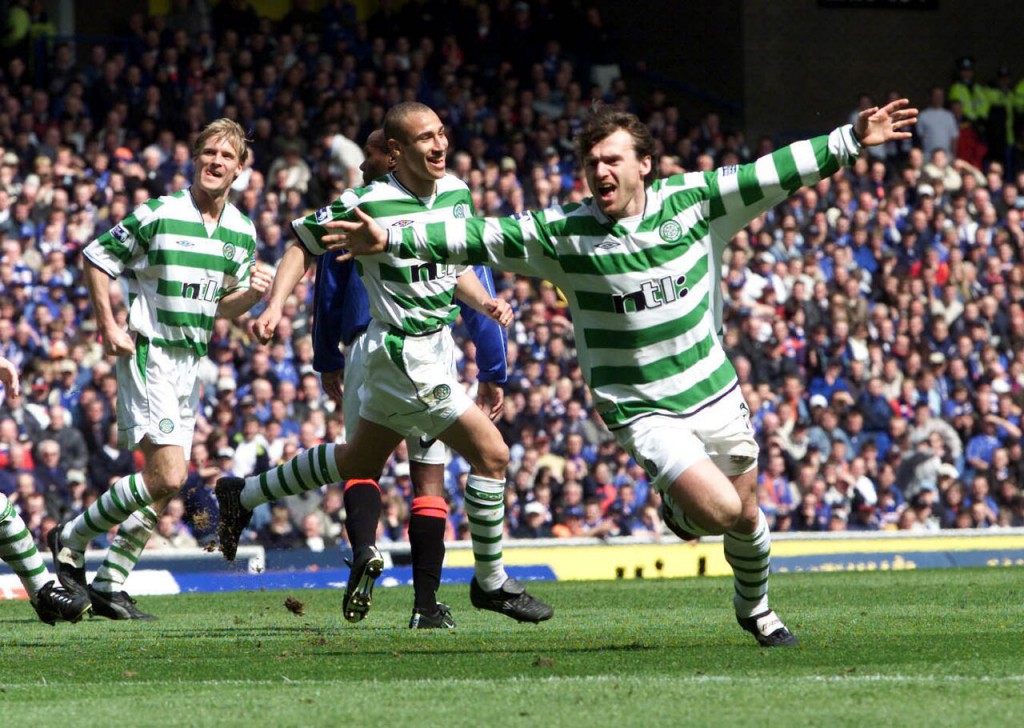 If I could alter one aspect of my genetic inheritance then I would request to have been born left footed. I say his for two reasons, one practical and one borne out of vanity.

Firstly, there is the issue of supply and demand. There are millions of footballers worldwide and only 10-15% are thought to be left foot dominant, so it follows logically that left sided footballers are more likely to be selected at school, boys clubs and academies. I would make an educated guess that most of our early experiences of playing football would reinforce this.

Upon making the grade, left footers are more likely, by virtue of their relative scarcity, to have a transfer value which is disproportionate to their actual ability. It is debatable if Gareth Bale would be rated at £50 million if he played as a right sided midfielder.

If you think back to the teams you played in as a youngster; I’ll bet there weren’t many left footed subs. Generally they were handed the number 3 or 11 shirt and so they naturally became left backs, left midfielders or left wingers. The eternals laws of common sense suggest lefties have a slight competitive advantage over conventional right footer types.

While it’s true that in the footballing world there are practical and professional advantages to kicking with the wrong foot, my envy is more a matter of aesthetics. In a romanticised, purist way of looking at the beautiful game, left footers just seem easier on the eye, more balanced, elegant, fluent and accomplished. There is no reliable scientific method of proving this, it is purely perception, but they seem to possess a sort of exotic quality, exhibiting an unusual level of craft, intelligence and guile in comparison to their right footed counterparts.

Consider the following list of left footed luminaries: Di Stefano, Cruyff, Puskas, Maradona, Brady, Rivelinho, Stoichkov, Hagi and more recently, Messi, Giggs, Rivaldo, Van Persie and Silva. Granted, some left footers are average, workmanlike plodders but in any list of all time greats, left sided players are regularly over represented. If this is a coincidence then it is an enduring one, as the pattern has persisted over many decades and shows no sign of abating in the modern game.

Celtic FC continue to contribute in their own small way to this phenomenon with a handful of left footers operating in the current squad, all with their own distinctive playing style, most notably, Mulgrew, Izzaguirre and Commons. All are intelligent footballers capable of playing with style and flair when they are on form. Recall the performances of Commons and Emilio last season, their displays characterised by neat and nimble footwork, deft touches, and in the case of the latter, a potent shooting accuracy on his favoured side.

This modern crop of lefties follow in the footsteps of some outstanding predecessors who have, in their own way, exerted an influence on the clubs history. In the name of nostalgia, here is a selection of some of the best left footers to grace the turf of Celtic Park in recent times.

Shunsuke Nakamura had a significant impact on Celtic, scoring 31 goals in 157 appearances between 2005 and 2008. However, it was the nature and timing of his goals and the gracefulness of his play that marked him out as an extraordinary footballer. A title winning goal at Kilmarnock, the last minute free kick at Love St, two spectacular Champions strikes against Manchester United, the hat trick against Dundee United and the outrageous, swerving, dipping rocket against Rangers on a magnificent evening in May 2008, each one perfectly showcasing his world class ability. Naka remained utterly unflappable, even in the face of extreme provocation, and in this respect his temperament was not dissimilar to Henrik Larsson’s. His professionalism, humility and devotion to his trade won him many admirers, but in the main, Celtic fans revered him for his class, skill, ball control, passing ability and those beautiful left footed free kicks, which sailed past numerous hapless goalkeepers with bewildering regularity.

“For pure ability, Nakamura is the best footballer I have worked with, in both my playing and management careers. I played alongside Robson, Dalglish and McAllister but Nakamura comes out on top. When I talk about pure ability, I mean ball control, vision, touch, change of direction and what he has on top of that is a great work ethic.” Gordon Strachan

My personal knowledge of Bertie Auld is derived from his own autobiography, grainy DVD’s and some famous anecdotes of debatable veracity. However, what is certain, and recorded in the history books, is that among his many other qualities and characteristics, he was a true goalscoring midfielder. Or for those of a certain vintage, a goalscoring inside left. He made 257 appearances for Celtic in two spells, scoring 79 times, a return of a goal every three games. Often labelled as the perfect foil for Bobby Murdoch, I am assured by those who watched him that he was a distinguished playmaker in his own right, skilful and cunning in equal measure, with a personality to match.

For long spells during the 1990’s, John Collins made Celtic watchable. Signed by Billy McNeill from Hibs in 1991 he was a cultured and skilful midfielder who evolved into one of the finest Scottish players of his generation. Collins was capable of taking the ball in tight positions and retaining possession courtouesy of his technique and self belief. Though diminutive in stature, (he was only 5’7)’, his determination and strength enabled his ability to come to the fore.  Though he was never prolific at Hibs, Monaco, Everton or Fulham, Collins netted regularly at Celtic, scoring  54 goals in 267 appearances, and often in the big games. He developed and honed his dead ball technique throughout his career scoring several free kicks and penalties in the green and white hoops.

Alan Thompson, more than merits a mention in any list of great left sided Celts. Signed from Aston Villa by Martin O’Neill, Thomson provided dozens of assists for Larsson, Sutton and Hartson with wicked deliveries from the left wing. He utilised his crossing ability to devastating effect in his time at Celtic and scored 51 goals in 207 appearances. A key component of Thompsons make up as a footballer was his unfailing ability to perform in the big games. A constant scourge of Rangers (he scored eight times against them), he also shone consistently in Champions League games. While he may not have had the grace of Collins or Nakamura he possessed a winning mentality which enabled him to pick up 4 SPL titles, 3 Scottish cups and 2 league cups.

It could be argued that Barry Robson was not dissimilar in style to Alan Thompson. He delivered excellent set pieces and displayed a mighty will to win which helped drive Celtic to three in a row under Gordon Strachan. Incredibly and perhaps uniquely, he also scored with his first touch of the ball as a Celtic player at Pittodrie, walking straight on to the pitch as a substitute and scoring direct from a free kick. His hard working performances and dead ball ability, not to mention his goals against Rangers and Barcelona, made him a fans favourite in his short time at Celtic.

The great Tommy Burns epitomised all that is good about the club with his off field persona, but his on field ability can never be forgotten. A Celtic player for fifteen years he could send a full back to the pie stall with a swivel of his hips. When Jock Stein signed him he was by all accounts raw and coltish, but in time, and with dedication, his technique developed to such an extent that he became a mainstay in a number of title winning teams. Another left midfielder with an excellent goals to game ratio, he scored 82 in 467 appearances.

Although not technically left footed, Lubo Moravcik merits a mention because his weaker foot was better than everyone else’s dominant side. Moravcik was a genius in every sense of the word, a beautifully balanced inside forward with dynamite in his boots when he shot for goal. His very first goal for Celtic came via with his left boot in a 5-1 defeat of Rangers and who can ever forget the stunning 30 yard shot which whistled into the net at Easter Road. The fact that he was so good for Celtic makes some journalists’ comments at the time of his signing sound all the more preposterous today:

“If anything, the signing of Lubomir Moravcik at a cut price has merely caused them further embarrassment”

Tosh McKinlay deserves greater recognition for his services to Celtic from the left flank. Pierre van Hooijdonk’s goal-scoring feats were in large part down to McKinlay’s Beckham-esque deliveries from the bye line. A winger converted into a full back, Tosh would surely have won more Scotland caps had he possessed the pace of an Izaguirre for example.

A wild card mention must got to a potentially great Celtic number 10 with the passing range of Pirlo or Xavi combined with the temperament of Vinnie Jones  Alas, Chic Charnley played only once as a trialist for Celtic but what a left foot! Of his one appearance in a Celtic shirt, Charnley reflected:

“The moment I had waited for all my life was only was only minutes away – I was about to pull that coveted hooped shirt over my head. My chest was pumping up and my heart was beating like never before. I was going to play for Celtic and I was going to enjoy every minute of it. And I did.”

Sensational, era-defining goals appears to be an ever present characteristic of the great left footers (think of Nakamaura v Man Utd and Collins’ free kicks at Ibrox), but as alluded to earlier, the volume of goals is equally as impressive as the artistic merit.  On admittedly limited research, I can think of six left footed Celtic players in the modern era to have scored a hat trick in the Hoops – Tommy Johnston, Mark Burchill, Bertie Auld, John Collins, Ross Wallace and Nakamura.

There is a final commonality shared by the majority of these left footed  Celtic stars, not necessarily to be admired, but at times endearing. It is their propensity to self-combust . Thompson, Robson, Mulgrew, Auld, Burns, Charnley, Ledley and Commons have all been sent off, several of them on numerous occasions. So while temper and passion may or may not be hard wired into these left footed greats; vision, skill, goals and attitude is part of their DNA.

Left footed players contribute to the beautiful symmetry of a football game, providing a wonderful counterbalance to the right sided majority and ensuring the ebb and flow of a match is maintained. A team with no left footed players is cumbersome, its weight all one side and likely to be dribbled dizzy by the delicate skills of an opponent. So as long as the game is played on grass, left footers will continue to look like they were born to play football.

Written by Chris Collins for an earlier edition of CQN Magazine.