Celtic Quick News on News Now
You are at:Home»Latest News»ALLAN’S HOOPS AIM
By CQN Magazine on 1st March 2016 Latest News
SCOTT ALLAN has revealed he is happy to be a wide Bhoy at Celtic.
However, the £300,000 capture from Hibs in the summer admitted he feels more at home in central midfield. 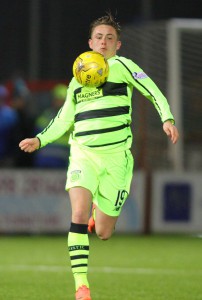 Allan, who made his first league start for the Hoops in the 1-1 draw with Hamilton on Friday night, said: “I was slow off the mark out on the wing.
“It took me quite awhile to get into the game. I thought I played a lot better in the second-half when I was moved inside along with Scott Brown and Stefan Johansen.
“To be fair, the central midfield area is where I’ve played most of my football in my career.
“Obviously, I know more what I’m doing in there than out of the left.
“But I’m just happy to get a start and, hopefully, I can kick on from here.
“I want to build on my first league start and I know there is more to come from me.
“Also, I’m determined to show the fans I’ve got a lot more in my locker. It’s all about getting a run of games.”
Allan hopes to get the nod to play against Dundee at Parkhead tomorrow night after his experience at New Douglas Park.
He added: “Obviously, I wanted to mark my first start with a win, but it wasn’t to be.
“We had two or three chances to score in the second-half, including the missed penalty-kick, and then we lost a goal at a set-piece. That was not what we wanted.
“However, we are looking forward to the Dundee game now and I want to play my part.”
* Scott Allan was speaking to Celtic TV.
——————————
*Order WINDS OF CHANGE for only £13.99 and receive a FREE copy of TOTAL LARSSON DVD and a copy of Issue 3 of the excellent CQN ANNUAL.
Shop now at www.cqnbookstore.com