EFE AMBROSE has been linked with a shock move to Olympiakos.

Reports from Nigeria insist talks between Celtic and the Greek giants are at “an advanced stage”.

The Super Eagles defender is also believed to have been the subject of enquiry from Israeli outfit Maccabi Tel Aviv, but but Olympiakos appear to be favourites to sign the versatile back-four performer. 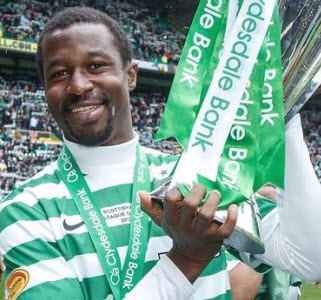 Ambrose could join the Greek champions on a season-long loan deal as he runs down his contract at the Hoops which expires in June next year.

The right-back or centre-half was included in Brendan Rodgers’ travelling squad for Kazakhstan as they prepare for tomorrow’s Champions League third round play-off against Astana.

He was overlooked for the pool for the return game against Lincoln Red Imps at Parkhead last week after being blamed for the Gibraltar side’s winning goal the previous week. Ambrose failed to make the subs’ bench as Rodgers’ team won 3-0.

However, the erratic 27-year-old Nigerian came on as a second-half replacement for Mikael Lustig in the 1-1 draw with Leicester City in the International Champions’ Cup at the weekend.

Turkish aces Fenerbahce have also shown an interest in Ambrose whose four-year association with the Parkhead men looks to be coming to a halt.
——–
Once Upon a Time in the Kingdom of Govania is the hilarious new book from CQN laughing at the demise of Rangers and the pretendy new tribute act playing in the big boys league for the first time this season.