The Greek striker, who arrived in a £2.5million switch from Dutch minnows VVV-Venlo in August, hoisted his goal tally to 12 with his second Hoops hat-trick in the 4-0 win over Ross County at Parkhead at the weekend.

The triple spree followed an identical feat in the 3-2 victory over Dundee at the same venue the previous month to keep the team’s quest for their tenth title in 11 years on track.

Giakoumakis is clearly not one to indulge in extra touches in the opposition’s penalty area when he is presented with an opportunity. 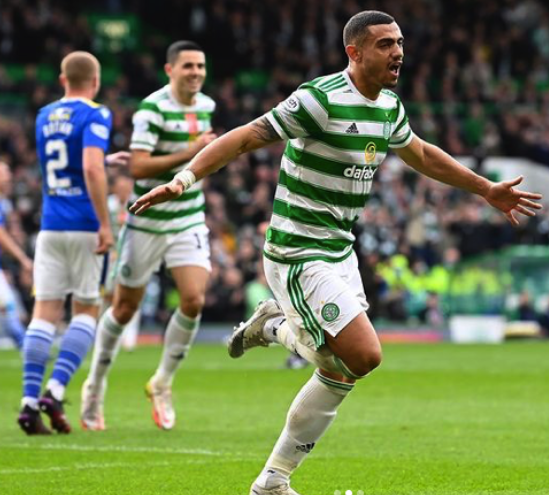 NUMBER ONE…Giorgos Giakoumakis races away in delight after netting his first Celtic goal against St Johnstone in October. Tom Rogic is about to join the Parkhead celebrations.

His first strike for the club was an indication of what was to follow. Anthony Ralston banged over a right-wing cross and the 26-year-old international hitman swept the ball beyond the helpless Zander Clark for the opener in a 2-0 triumph over St Johnstone in the east end of Glasgow in October.

He followed that up with a fluffed stoppage-time penalty-kick in the scoreless stalemate against Livingston just a week later leaving the fans uncertain of the player’s qualities.

However, following work on a knee problem, Giakoumakis has hit the ground running in 2022 and has proved a more than capable deputy for 16-goal Kyogo Furuhashi, ruled out with a damaged hamstring since limping off in the 3-1 win over the Perth Saints at McDiarmid Park on Boxing Day.

Looking at the quick-on-the-draw contribution of the marksman who claimed 26 last season for his relegated Eredivisie outfit, boss Postecoglou commented: “It’s not unique, it’s the way we play and I think you’ll find most of strikers, they are the kind of goals they score. 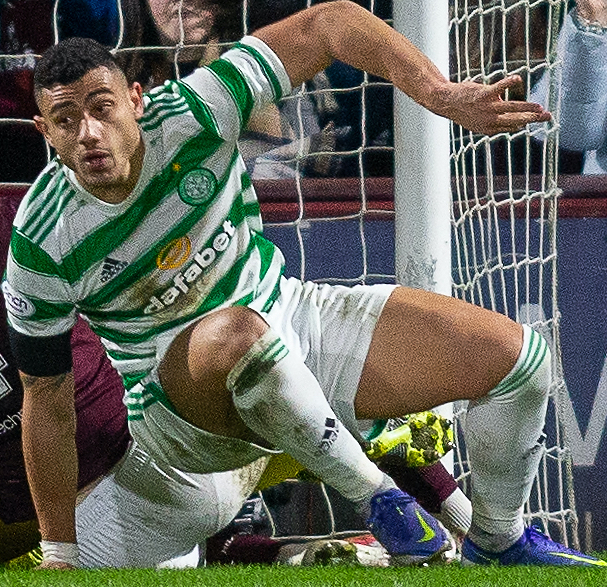 SIT-DOWN STRIKER…Giorgos Giakoumakis prepares to celebrate after hitting the second goal in the 2-1 victory over Hearts at Tynecastle in January.

“That’s the way we play our football, so you look for players who have those attributes.

“I think what’s more important than how he is finishing is how he is getting into the areas we’re needing. That’s the reason he can finish with one-touches, because he’s hitting the areas we need him to hit when we’re delivering balls in there.

Postecoglou, speaking to Celtic TV, added: “He’s doing well, but again he’s doing that off the back of some good team performances and he understands that he gets the rewards.

“He puts in the hard work, as well, but I guess the pleasing thing for me is that we’ve had a good share among the goalscorers and people need to make an impact at different times.

“Earlier in the yea, it was Kyogo and Dave Turnbull while Liel Abada’s scored a lot of goals, Jota, Giakoumakis, at present, and Tommy Rogic has chipped in.

“That’s been really important for us and I think the key to our consistency is that we haven’t relied on one player or one or two players.

“It’s great for Giakoumkis and Daizen who has been scoring lately to get amongst it, as well.” 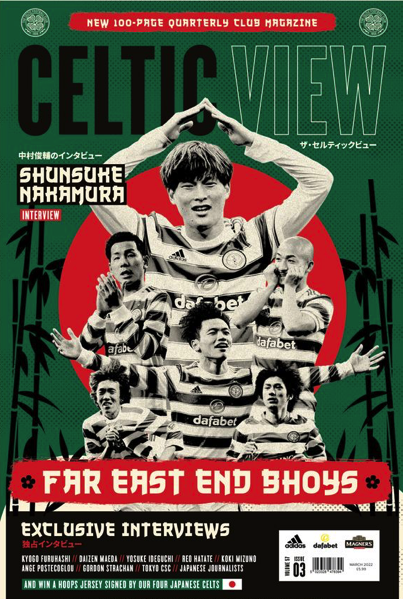 * YOU can also read Ange Postecoglou’s exclusive interview in the latest quarterly 100-page Celtic View and read his thoughts on how the new Japanese quartet are fitting in at Celtic – click on the image above to order.