Celtic Quick News on News Now
You are at:Home»Latest News»ANGE IN CAPTAIN QUEST: ‘SIMILAR IDEALS, VALUES AND BELIEFS THAT I HAVE’
By CQN Magazine on 10th July 2021 Latest News

ANGE POSTECOGLOU will explore all options before he names Celtic’s new skipper.

Callum McGregor is believed to be next in line for the honour following the departure of Scott Brown to Aberdeen in his new player/coaching role.

However, Neil Lennon’s successor is in no rush to make the appointment and the former Australia international manager is determined his onfield leader must be in tandem with his thoughts of the way ahead for the club.

Postecoglou will have chats with a number of experienced players before rubber-stamping what he clearly views as a crucial part of his jigsaw.

The new Hoops boss, speaking to the Daily Record, said: “It’s always important. Whoever your leader is it has to be someone with similar ideals, values and beliefs that I have. 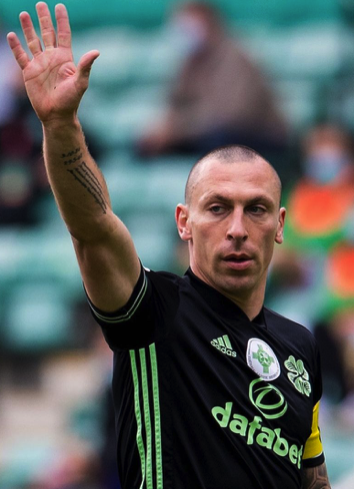 THE LAST HURRAH…Scott Brown says farewell as his 14-year Celtic career comes to an end with a goalless draw at Hibs in May.

“With Scott Brown leaving, it’s obviously a massive gap there. I will sit down with some good experienced players who have been here for quite a while and get their thoughts.

“Then I’ll see how they are round the place and make the decision.

“Scott Brown epitomised that. Someone who puts the club and its values above all else and drives those things.

“That’s not new – they have stood the test of time for over 100 years.

“Somebody who understands what it means to pull on the Celtic shirt and it’s history and traditions will be the person most suitable to the role.”

Swiss striker Albian Ajeti was the surprise skipper for the 3-1 midweek win over Sheffield Wednesday, but McGregor, who sat out the closed-door encounter, is poised to come back for the match against Charlton at Newport this afternoon, so it will be interesting to see who is entrusted with the armband on this occasion.