ANGE POSTECOGLOU has demanded his Celtic players conjure up a stylish conclusion to a phenomenal campaign.

The Hoops all but wrapped up a sensational title with their rampaging 4-1 triumph over Hearts at a rocking, sell-out Parkhead yesterday.

The win over the Edinburgh outfit – who, ironically, beat them on the opening day of the Premiership at Tynecastle on July 31 – stretched their unbeaten league record to a remarkable THIRTY games.

That is an astonishing statistic when you consider Postecoglou’s revamped squad suffered three defeats in their first six outings to practically prematurely end any serious challenge for the championship before the end of September. 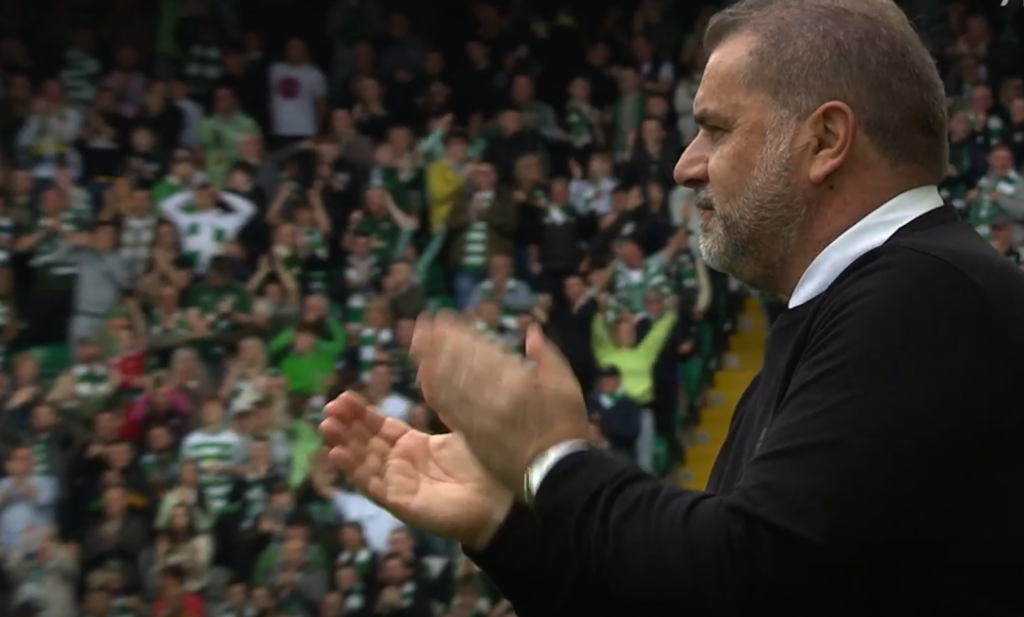 The turnaround has been extraordinary as the Greek-Australian’s system paid dividends and a host of acquisitions got used to each other’s play and preferences.

It would take a catclysmic nosedive for Celtic to fail to clinch their tenth flag in 11 years and the former Australia World Cup manager wants the team to bring down the curtain with a flourish when they play Dundee United at Tannadice in midweek and then Motherwell in Paradise on Saturday, which will be his sixtieth match in charge.

Postecoglou said: “We’re not collapsing over the line. We’re strong and we’re committed.

“Our performances and the challenges we’ve overcome are reflective of that. Any way it comes is fine. But, more importantly, it’s fully deserved.

“We are now looking forward to Wednesday. 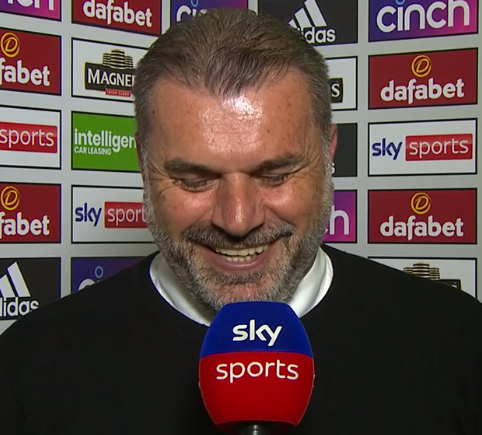 THE HOOPS GLEE CLUB…Ange Postecoglou is all smiles during the aftermatch interview with Sky Sports.

“I said to the boys before the game that there are many ways you can finish something off.

“You can collapse through the finishing tape or you can go through it at top speed.

“And that’s what we want to do. It’s what we’ve been doing all year.

“We’ll go hard on Wednesday and get back here and go hard again in the last game.”

The ecstatic fans celebrated big-style after goals from Daizen Maeda, Kyogo Furuhashi, Matt O’Riley and Giorgos Giakoumakis sealed another win after the visitors had taken a shock lead through Ellis Simms in the third minute.

A smiling Postecoglou, speaking to the Sunday Mail, continued: “There is nothing wrong with enjoying the journey. It’s not always just about the destination.

POSTECOGLOU AND HIS PERFORMERS…the Celtic boss and his players take a bow after another success.

“I thought it was another top performance from the boys and that’s the greatest reward you can get, to see the joy that it brings people.

“Whether that’s your own family, the people who love you, or the supporters who love this football club.

“I’m really proud of the group. We conceded early today which hasn’t happened too much in this run.

“You think a little bit about how the group will respond to that. But they were outstanding again and didn’t miss a beat.

“They stayed on course in terms of playing out football and we scored four good goals.

“We have conceded to teams before and fought back – it happened at Ibrox – but we knew on this occasion it was significant.

“You could sense there was nervousness around the stadium.

“But it’s about how people deal with that. I never had any doubts, it didn’t worry me. 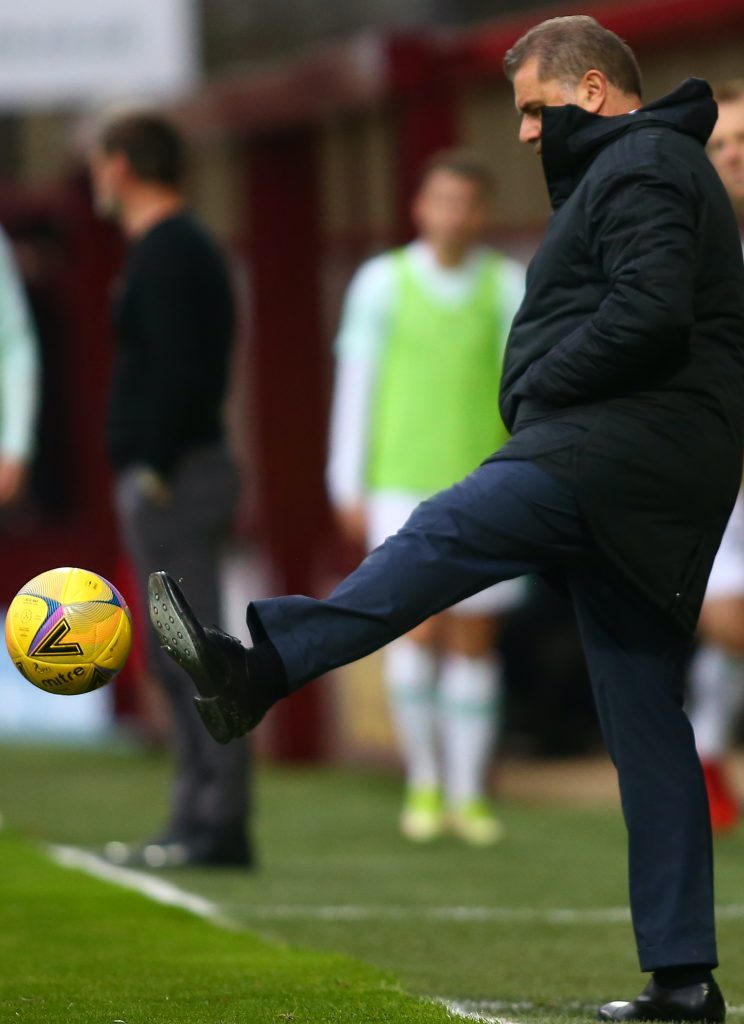 ON THE BALL…Ange Postecoglou demonstrates his skills during the 2-0 win at Motherwell in October.

“This group finds a way to respond, while not veering away from the basic values and fundamentals we have as a team.”

Postecoglou, 56, added: “With everything you do, you lay down a marker.

“What you want to do is come back next time and hit a new target. And that’s what we’ll do.

“When the story is written of this season, people will probably reflect that it’s been a fairly outstanding effort on all fronts from us.

“I know I talk a lot about this being just the first step of the rebuild.

“But I don’t say that to dismiss the extraordinary effort it has taken this year and the achievement of this group of players.

“Some people probably didn’t expect me to be sitting here right now. But within the group we had a strong belief we could do something special this season.

“That doesn’t guarantee success, but we were determined to produce a football team that in a way that excites our supporters.

“That was our primary target and I always believed in it.”