In the summer of 2000, the charismatic Irishman arrived at a club in chaos following the failure of the so-called managerial Dream Team of Kenny Dalglish and John Barnes.

The Hoops had completed the previous term 21 points adrift of Dick Advocaat’s Ibrox side which coasted to the title.

The first piece of transfer business for O’Neill was to pay £6million to Chelsea for striker Sutton to replace Mark Viduka who left for an identical fee to Leeds United.

POSTECOGLOU IN PARADISE…the Celtic boss applauds the fans after the 3-0 win over Jablonec.

A new-look Celtic hit the ground running and enjoyed an overwhelming and impressive 6-2 triumph over their Glasgow rivals in the opening derby of the campaign in which Sutton netted twice with Henrik Larsson also adding a double while Stiliyan Petrov and Paul Lambert chipped in with one apiece.

Afterwards, though, the new gaffer played down the win by saying his opponents were still the team to beat.

Sutton said: “It’s good to see Ange Postecoglou seems to be taking a leaf out of Martin O’Neill’s book. The Celtic manager isn’t getting carried away on the back of a really positive week – and he’s absolutely spot on.

“There is still an awful long way to go here and a huge amount of work to be done.

“When O’Neill came in more than 20 years ago he had to make up a massive points deficit on Rangers. We got off to a good start, but even after the Demolition Derby he refused to even suggest the balance of power had shifted. 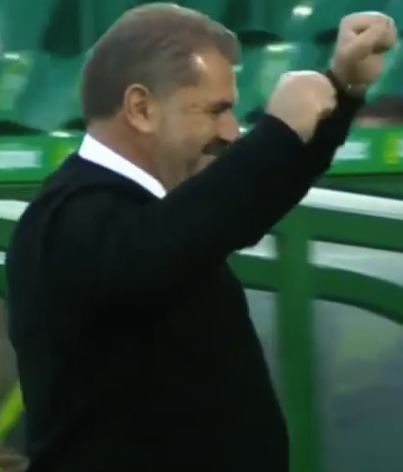 HANDS UP IF YOU’RE HAPPY…Ange Postecoglou celebrates David Turnbull’s opener against the Czechs.

“We all remember the famous ‘benchmark’ line – which he was still trotting out when we were about 15 points clear.

“It was smart management and Postecoglou has also been playing down any talk that his side have finally cracked it.

“Only two weeks ago, people were fearing the wheels had come off already after the Champions League exit.

“There are a lot of positives in the past week. He’s thrown in his new signings, but they have all shown they are up to the job and make the team better.

“That should give the board confidence to back him further because he still desperately needs reinforcements to compete over the long haul.”

Sutton, speaking to the Daily Record, continued: “The style of play will thrill fans, but will also terrify them in equal measure as Postecoglou’s game plan is a risky business that could backfire at times.

“It will be a bumpy road, but the signs are positive. Kyogo Furuhashi looks a top player. His pace and movement is exceptional and he seems like an infectious character.

“All the Shunsuke Nakamura comparisons are inevitable, but they look completely different characters. By all accounts, Kyogo is more outgoing. He’s already learning English and he’s thrown himself in to this squad and environment.

“It won’t have been easy for him, but he’s made a huge impression.

“I’m more impressed at what Postecoglou has done for players already at the club. I look at Ryan Christie and he’s back to his best.

“Celtic need to get a move on and stick a decent contract in front of him sharpish as he can be a key man at the club.

“And about Tom Rogic? Fans had almost forgotten about him. A year ago he was on his way to Qatar and nothing much happened for him last term.

“But maybe Postecoglou knows what makes him tick from their time with Australia and he can get him playing again. 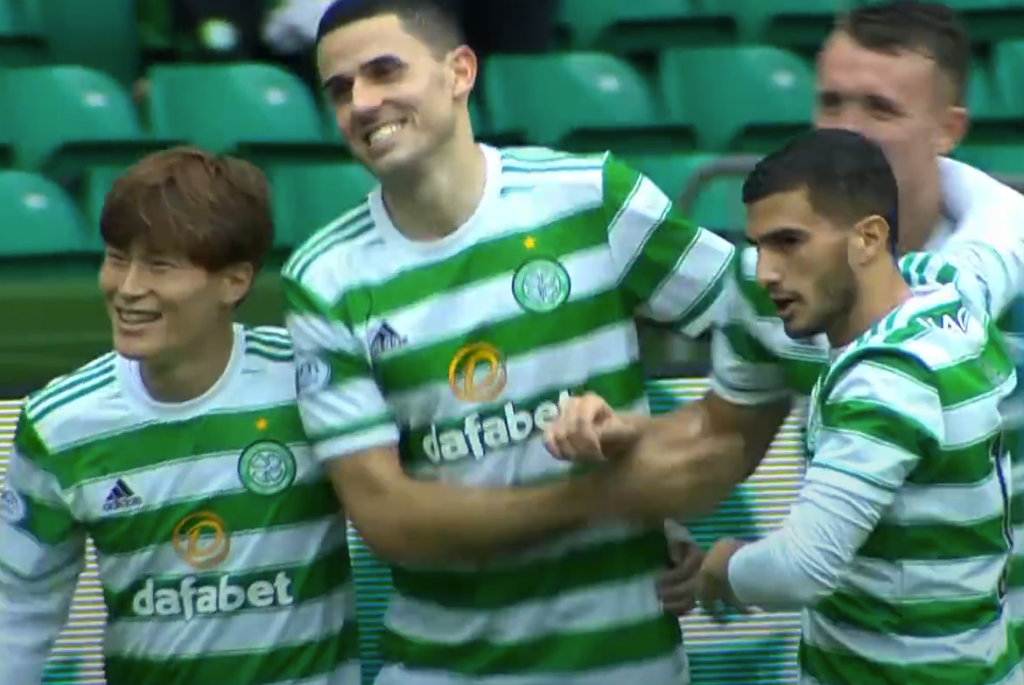 HAPPY DAZE…Tom Rogic is congratulated by delighted team-mates Kyogo Furuhashi, Liel Abada and David Turnbull after his goal in the 6-0 rout of Dundee.

“It would be a major boost if he does and Rogic can do things no-one else can do at Parkhead. When he’s on song no-one can touch him.

“The ball is in his court now. These are his peak years and it’s up to him what he does about it.”

The one-time England international striker added: “David Turnbull is another who didn’t start the season poorly, but hadn’t quite caught fire. His performance against Jablonec should be the perfect launch pad.

“There was a lot to be encouraged about all over the pitch, even at the back where it was nice to see a Celtic goalkeeper actually making saves.

“The two Joe Hart made he could probably do in his sleep, but that’s not the point. The ball would have been in the net last season. 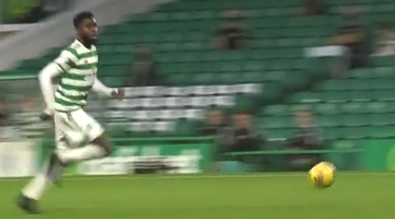 ON THE MOVE…Odsonne Edouard gets into his stride against Jablonec.

“There are still questions about Odsonne Edouard, but whether he stays or goes, though. He needs to be playing – and performing. He might be waiting for Brighton, but if the move doesn’t come or the money isn’t right, then where will it leave him?

“It won’t be any good for him or for Celtic to be lingering on the sidelines for another year.

“Celtic have got their act together, but the real test will be against AZ Alkmaar next week and when they face Rangers in a few weeks.

“The spotlight is on Ibrox right now. The crazy decision to allow Alfredo Morelos to miss the first leg against Malmo, the contracts left unsigned, the players who might be looking to go.

“We saw how fragile football can be with the way Celtic fell apart a year ago. Could that happen at Rangers?

“I wouldn’t bank on it and Celtic can’t, either. They need to stay grounded, they need to keep developing and recruiting.”