ANGE POSTECOGLOU allowed his frustration to show when he was questioned by a Sky Sports reporter just minutes after the late-goal defeat against Hearts at Tynecastle.

The new manager kicked off his first game in the Premiership and had just watched John Souttar be allowed a free header one minute from the end to bury the ball behind Scott Bain after the defence failed miserably yet again to deal with a set-play.

Postecoglou had witnessed some Keystone Cops defending to gift the home side the opening goal for Gary Mackay-Steven in the eigth minute, but had also seen his side fight back to level following a superb run and shot from right-back Anthony Ralston nine minutes after the turnaround.

Liel Abada had what looked like a perfectly legitimate second goal ruled out for a marginal offside on Greg Taylor before the industrious left-back delivered an excellent low ball into the danger area. TV Pictures showed an arm was flagged up as playing him off.

So, the new Parkhead boss could be expected to be permitted some slack for having to face a live interview in the fall-out of such occurrences. 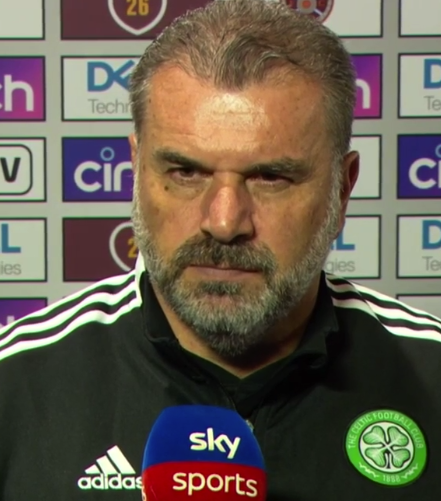 THE EYES HAVE IT…Ange Postecoglou fires response to Sky reporter.

Postecoglou told the Sky man: “It’s a game we could have won and we didn’t.

“We can’t afford time. We’ve got to bounce back and get results.”

It was then put to the boss that he seemed to be repeating himself since Wednesay’s defeat against FC Midtjylland and Postecoglou snapped back: “You’re asking me the same questions, so I’m going to repeat the same answers.”

“I think we know where we’re at and what we need to do.

“At the moment, we’re throwing teams together, I am, anyway, and that’s affecting it.

“But put that all aside, because that all sounds like excuses even as I’m saying it. It’s still a game we could have won.”